Iranian militias leave the border between Syria and Iraq

In Syria, the retreat of Iran's allied militias from the border area with Iraq has now begun; but the places to which they are heading are still unknown [1]. They flee preventively, for fear of suffering new losses due to the frequent attacks that, in recent weeks, have hit Iraqi territory. 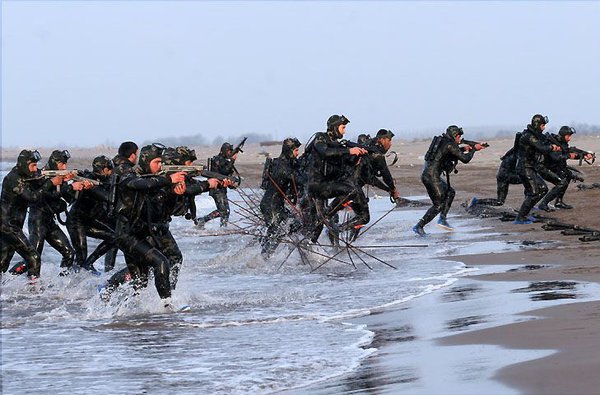 Set up in the Syrian district of Al-Bukamal - in the governorate of Deir Ez-Zor, on the border with Iraq - since last Monday Iranian proxies have started evacuating their headquarters - which manages operations in the area - at a time of new centers, more hidden and safe.

The transfer activities started just after the last attack that hit the Iraqi territory and, in particular, the town of Al-Qaim, located in the Al-Anbar governorate, right on the border with the district of Al-Bukamal .

In Al-Qaim, last August 25, a drone hit two vehicles of the Kata'ib Hezbollah Brigades - an Iraqi Shiite paramilitary group supported by Iran, located under the umbrella of the People's Mobilization Forces (PMF).

The death toll - according to the Kurdish television station Kurdistan24 [2] - was 6 dead, including Kazem Ali Mohsen - known as Abu Ali Al-Dabi - support officer of the Brigades in western Iraq. The Iranian militias have instead provided a contrasting version, speaking of two victims and one wounded.

That of Al-Qaim is only the latest in a series of attacks that, in recent weeks, have centered on military posts and ammunition depots of the Popular Mobilization Forces on Iraqi national soil. Air raids that the director has not yet been identified, although many see Israel's hand there.

To reinforce this hypothesis also the statements [3] of the Israeli Prime Minister, Benjamin Netanyahu, who, while not denying or confirming Israel's involvement in Iraq, has leaked some information that would confirm the veracity of the accusations. "Nowhere, Iran is immune" - declared Netanyahu - "We are acting in numerous theaters against a country that wants to destroy us. The security forces had a green light, in addition to the task of doing what is necessary to thwart Iran's plans".

Iran controls the border between Syria and Iraq

The border area between Iraq and Syria - almost completely under the control of Tehran's allied militias - is a vital artery for Iran, used for the transfer of men and vehicles from the Islamic Republic to neighboring countries. Recent satellite images [4] (Fox News) have revealed that Tehran is building a border crossing between Syria and Iraq: a "land route" to connect with Lebanon.

The new crossing, as it seems to be inaugurated at the beginning of September [5] - would arise in the border crossing of Al-Bukamal (in Syria) and Al-Qaim (Iraq), replacing the old crossing, destroyed during the war and still closed.

Through this passage, Iran would maintain access by land to reach Syria, Lebanon and the Mediterranean Sea. Tehran, moreover, makes no secret of its intention to form a stable presence in Syrian territory, to strengthen Hezbollah's military capabilities and to extend the front with Israel from southern Lebanon to the Golan Heights.