India and Pakistan Itching for Showdown on Kashmir

by Mahboob A. Khawaja, PhD. 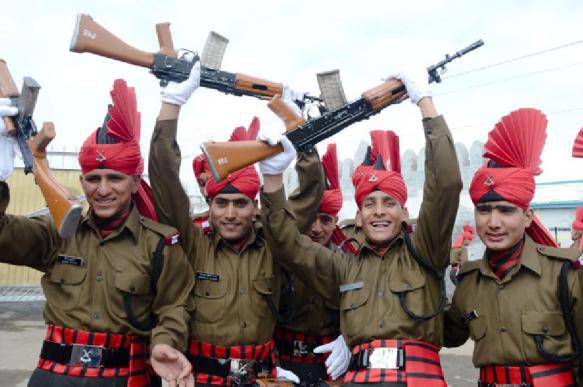 Has civilization taught us to be more friendly towards one another? Asked Bertrand Russell, the British philosopher and intellectual and explains further:  ...Within the herd we are more friendly to each other than are many species of animals, but in our attitude towards those outside the herd, in spite of all that has been done by moralists and religious teachers, our emotions are as ferocious as those of any animal, and our intelligence enables us to give them a scope which is denied to even the most savage beast. It may be hoped, though not very confidently, that the more humane attitude will in time come to prevail, but so far the omens are not very propitious.

People of Kashmir Live in Denial of their Freedom

History made India and Pakistan enemy and geography made them neighbors. They never learned from history and geography to be friendly nations. The State of Jammu and Kashmir is at the heart of all political and strategic problems which characterize the nature of relationships between the two nuclear rivals. Under the current BJP Government, India is tainted by Hindu nationalism and its ideological and normative connotations and supremacy of thoughts. But its unilateral claim on the people of Kashmir negates the British constitutional act of freedom for both states and does not have the characteristics of truth, wisdom and honesty to assert moral and intellectual justification. There are more than dozen of UN Security Council Resolutions on the Kashmir dispute accepted by India and Pakistan calling for a plebiscite (referendum) to be held respecting the rights of self-determination of the people of Kashmir. If both countries were responsible in global affairs, an impartial referendum could have paved the way for a peaceful resolution of Jammu and Kashmir.

This week, Indian parliament using a legal stipulation of its own paperwork has changed the status of Kashmir without any consent or reference to the people of Kashmir. Strange democracy at work in violation of its basic tenets, questions the essence of Indian secularism, Farooq Abdullah many times former chief minister of Indian administered Kashmir. Legal vices or falsehood do not change the human behavior and intellect. Political leaders of conscience and humanity can never enforce animosity on innocent people.

Moving from a humanitarian showdown to large scale military conflict between the two nuclear nations of the sub-continent does not sound the strategy of ingenuity and political farsightedness. The UNO spokesperson sounds alarming concerns over the extreme militarization of the region of Kashmir. Reason lives in denial of the basic rights of the masses of Kashmir, political quagmire takes over the treacherous ambuscade. Both countries are entrenched in a military geared conspiracy to test weapons on the people of Kashmir and mismanage the public consciousness for political reasons. What a catastrophic mindset to undo a sustainable future for both the nations. Could the leaders be people of reason to respect the right of self-determination and let the masses of Kashmir decide their own future whether to join India or Pakistan or remain independent with some collaborative relationships with both countries.

Could India and Pakistan learn a lesson from the contemporary history and approach the issue with a proactive vision for the best of all the people of the subcontinent? The media reports portray evidence of tragic and abnormal military activities across the Indian administered Kashmir. The people of the valley are locked up and denied free movement. Many false political apprehensions and claims on Kashmir could lead to dreadful and unavoidable consequences given both nations possess nuclear arsenals. The truth on Kashmir is unchanging as it was in 1947 at the time of partition of British colonized India and as it was when both countries accepted the UNSC Resolutions for a peaceful settlement of the Kashmir dispute. Any unilateral move under 370 Indian parliamentary act is a self-serving delusional strategy of tyranny imposed against the innocent masses of Kashmir. Agreeably, truth is not transient or adaptable to the political lethargy of any nation or leaders. When competent leaders enriched with moral and intellectual capacity lead a nation, they imply knowledge-based wisdom and facts of history to benevolence and human justice and certainly not to malignity and political deceit.

Could the Global Community Persuade India and Pakistan to a Peaceful Resolution?

The 21st century is an age of globalization. Crisis in one part of the world affect all the people of the Earth. We, the humanity live in co-existence with the Nature of things within the Universe. If we tend to be blind to basic human requisites of human rights, social justice and peace, we tend to challenge and deny the cosmic harmony and justice in which we exist as mankind. These thoughts and ideals are no strange to the Indian classic history. Yet, the politicians appear to question the canons of rationality and fairness when it comes to the rights of the people of Kashmir. No one can justify any rebuttals to reflect on the incompatible derogatory demands disrupting the social, economic, political and humanitarian lifelines of the masses of Kashmir. Kashmir was never an integral part of India or Pakistan. During the British Raj, it remained an independent state outside the British colonial rule. All economical, geographical and political lifelines of Kashmir pass through Pakistan.

We, the humanity face an extremely dangerous precedent for peaceful resolution of conflict and need is urgent for the UN and the global community as partners to discover the truth and wisdom of mediation for peacemaking of all the perplexities and false claims and counter-claims on Kashmir. There is no wisdom to synthesize a gruesome legal and political claim to deny freedom to the people of Kashmir. There are plenty of morally and politically enlightened hubs in India and Pakistan to reject the false legal action and support the historic truth that remains unchanged in its timelessness existence that rights of the people of Kashmir must be respected and be the cardinal approach to articulate a better future for all. If Indian or Pakistani emotionally charged political activists think of any military solution, they are wrong now and they will be wrong after the facts. It could be disingenuous mystery of self-destruction without any favorable outcomes. Only stupid and irresponsible leaders could opt for such a strategy to resolve an international conflict. Both countries need an awakening torch of rational self-analysis and peaceful future-making.  All demonstrations and loud crying of emotionally charged agents do not translate into tangible logical actions. One wonders why Pakistan did not organize a single international conference on Kashmir? Why were the Kashmiris not allowed by UNO to free movement and business on both sides?   Pakistanis have lost 50 years under corrupt political monsters - Bhuttos, Zardari, Sharif and Musharaf. They should think critically and collectively and see the mirror how to rebuild moral and intellectual capacity after 50 years of decadent political culture and to stand firm for the protection of the rights of people of Kashmir.

For long, they should have known what India was planning to do. Indian PM Moodi under BJP governance is doing what he claimed to be to make India a more productive and militarily strong nation. Under corrupt leadership, Pakistanis had no strategic plan on Kashmir or their future-making. If PM Imran Khan is trying to bridge the gap of time and history, it is not an easy domain and there is no quick fix to restore a sense of political cohesiveness across many divided lines of political thoughts within Pakistan. The masses must realize how they wasted time and opportunities for political change and to rebuild a stable Pakistan to protect its national interest and standing within the global community. Its former leaders were devoid of any moral and intellectual capacity to defend the people of Kashmir. They were all inept, corrupt and criminals who stole the time and wealth of the nation to buy palaces abroad. Pakistanis must do soul searching and think critically how to make a navigational change to ensure their national interest, freedom and a productive sustainable future.  Both nations have friendly ties with Russia, China, USA and West European nations and leaders of these countries must take initiatives to make India and Pakistan understand the strategy of peace-making and good neighborly relationships as a preventive measure to stop a dreadful futuristic war.  Bertrand Russell has intelligently summed up the human ideals:

Moral ideas sometimes wait upon political developments, and sometimes outrun them. The brotherhood of man is an ideal which owed its first force to political developments....The present moment is the most important and most crucial that has ever confronted mankind. Upon our collective wisdom during the next twenty years depends the question whether mankind shall be plunged into unparalleled disaster, or shall achieve a new level of happiness, security, well-being, and intelligence.  I do not know which mankind will choose. There is grave reason for fear, but there is enough possibility of a good solution to make hope not irrational. And it is on this hope that we must act.