Protests in Moscow: Russia on the way to another revolution

It did not make any sense to analyze the Saturday rally in Moscow as soon as it happened, but Monday appears to be just the right time to do it. 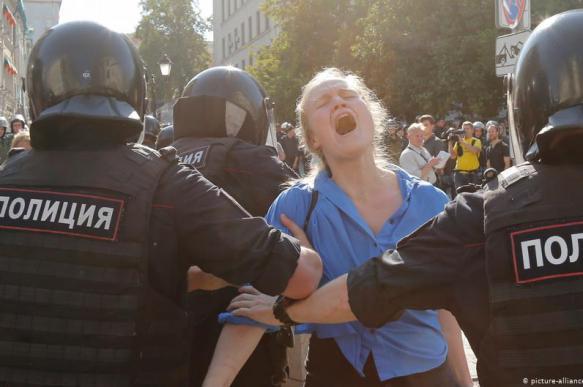 No one talks about the roots of the protest actions that took place in Moscow over the weekend. Most likely, they are not about the registration of certain individuals by the Moscow City Duma as candidates.

The issue of the protest itself is broader. People took to the streets during the arrest of journalist Ivan Golunov, during the construction of an Orthodox temple in Yekaterinburg, etc. All those stories are symptoms of one and the same disease.

One could see this disease spreading throughout Western Europe and the United States during the 1960s, but the causes of it were different. In the US, it was the Vietnam War and the killing of Martin Luther King. In Europe, there were protests against events in Czechoslovakia and other internal problems.

For a very clear understanding of the situation, one may refer to two graffiti that students of the Sorbonne left in the streets of Paris in 1968: Since 1936 I have fought for wage increases. My father before me fought for wage increases. Now I have a TV, a fridge, a Volkswagen. Yet my whole life has been a drag. Don't negotiate with the bosses. Abolish them." "One cannot fall in love with industrial growth!" It appears that the Russian youth could chant the same slogans today, if the education system in Russia has not degraded since the years after the Soviet power.

It was not only education that has degraded. The qualification of people who are responsible for the moderation of internal political processes has gone down the toilet as well.

Kiriyenko's 'social elevators' serve primarily managers of large corporations, but in case of social upheavals they will humbly step aside to observe. Mass youth movements of Mr. Surkov, the Reaction newspaper and the Yoki website have been disposed of. If one looks at what  presidential grants are allocated to, one will see that they are not needed today, but could be good during the "lush" times.
The United States eventually decided to pull out troops from Vietnam, abolish mandatory conscription and promote the PlayBoy technology (the protests are also known as 'sexual revolution' for a reason). Other countries had their own recipes.

It is the internal essence of protests that plays the main role in the struggle that one can see in Russia developing today. If one doesn't know the essence, any struggle with external manifestations of protests will be useless.

We know one thing. If the authorities remove all problems with the elections to the Moscow City Duma, the public protest will persist. The protest sentiment began to actively develop during the beginning of the pension reform, so it primarily involves the children of those people, whom the authorities have betrayed shamelessly. It has started snowballing for various reasons afterwards getting an increasing amount of citizens involved.

It is 's time to open a tender for a team that would replace Sergei Kiriyenko with new ideas. The current political administrators under his leadership lack qualification to solve the issue of stability in the society.

Author`s name Vadim Gorshenin
*
14:14
Kyiv's largest thermal power plant damaged in Russia's rocket attack
19:39
Putin pays visit to Crimean Bridge two months after explosion
18:32
Russia strikes Ukraine's infrastructure facilities for 8th time
16:11
Retired US intelligence officer: Russia will win in Ukraine in summer of 2023
15:56
British mercenary: Winter cold in Ukraine came as a shock to us
15:31
Moscow responds to EU's decision to cap prices on Russian oil
14:52
As many as 2,500 dead seals found on the coast of Caspian Sea in Dagestan
14:11
Three household gas explosions occur in different parts of Russia in one day
23:35
Putin keeps his promise and presents impressive gift to China
16:30
Armed Forces of Ukraine strike transformer substation in Zaporozhye
UK and USA could be part of drone attacks on Russian military airfields