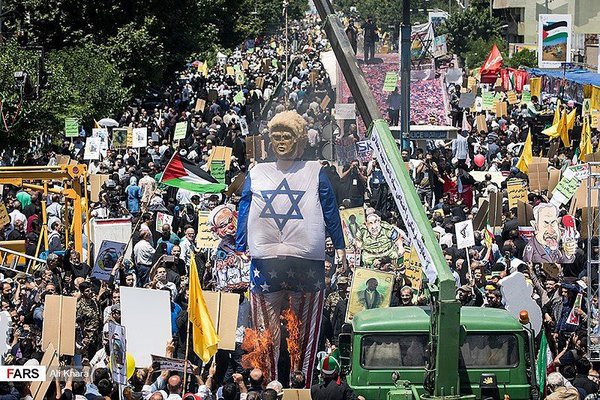 The last time Israel was preemptively attacked by anyone was at the start of the October 1973 Yom Kippur war, never since then. Its only threats are invented ones, the same true for the US and NATO.

Throughout their history, Iran and Hezbollah never preemptively attacked anyone, nor does any evidence suggest their intention to go this way now.

In sharp contrast, the US, NATO, and Israel repeatedly attack other nations aggressively, including over 70 years of undeclared Israeli war on defenseless Palestinians - supported by the US.

In late June, Netanyahu suggested that Israel may attack Iran's (legitimate) nuclear facilities preemptively - something similar to its 1981 strike on an Iraqi nuclear reactor under construction southeast of Baghdad.

The move if taken could spark Iranian retaliation, risking the escalation of things to regional war. It's highly unlikely that Netanyahu would preemptively attack Iran without US permission, though nothing can be ruled out.

"Whatever happens, Israel will always defend itself, and the air force plays a major role in this," Netanyahu roared at a late June graduation ceremony for IDF pilots.

He repeated the Big Lie claim about Iran "threatening the destruction of Israel," adding: IDF warplanes "can reach every place in the Middle East, including Iran and, certainly, Syria."

Currently at 4.5% purity level, possibly heading up to 20%, it's nowhere near the 90% level required to develop and produce nukes - nor does any evidence suggest Tehran intends going this far, just the opposite.

DF also cited fabricated reports that "Tehran has completed preparations for a military strike on Israel from Syria," adding:

"According to different (unnamed) sources, Hizballah and a pro-Iranian Iraqi Shiite militia are involved in these war preparations."

Separately in late June, IDF spokesman Lt. Col. Jonathan Conricus falsely Hezbollah of concealing over 100,000 missiles and rockets "behind Lebanese civilians...all of them aimed at our civilians," adding:

"The aim of (these weapons is to) fire them at the Iranian orders at our civilians..."

Accusations without verifiable evidence are baseless. Time and again, Iran, Hezbollah, Hamas, and other Palestinian resistance groups were falsely accused of threatening Israeli security when reality is the other way around.

Iranian and Hezbollah weapons are solely for defense. US, NATO, and Israeli military preparedness is for naked aggression - the real regional and global threat.

Their ruling authorities repeatedly accuse targeted nations and people of crimes committed against them - the blame game justifying what's unjustifiable.

Ignoring their own breach of the JCPOA, prompting Iran to invoke its Article 26 and 36 right to increase the amount and purity of enriched uranium to pre-agreement levels, Britain, France,  Germany, and EU foreign policy chief Federica Mogherini falsely accused Tehran of "pursuing activities inconsistent with its commitments" under the deal, adding:

"These compliance issues must be addressed within the framework of the JCPOA, and a Joint Commission should be convened urgently."

"Iran has stated that it wants to remain within the JCPOA. It must act accordingly by reversing these activities and returning to full JCPOA compliance without delay."

Europe breached its JCPOA obligations. Iran's actions comply with its terms. Its officials clearly said they'll reverse actions taken if Europe fulfills its commitments as required - what it hasn't done and shows no signs of changing its policy, supporting the Trump regime's illegal pullout instead of breaking with its unacceptable actions.

On Wednesday, Iran's envoy to China Mohammad Keshavarzzadeh said his nation's ruling authorities are committed to the JCPOA - proportionate to actions by European signatories, adding:

Unlawful US actions in recent decades destroyed multilateral international diplomacy, including a destructive blow to the JCPOA and Nuclear Non-Proliferation Treaty.

The only threats to ships using these channels is from aggression by the US and its imperial partners - clearly not from Iran, Syria and their allies.

Note: On Wednesday July 10, the IAEA will hold a meeting on the JCPOA, requested by the Trump regime.

If he addresses the issue accurately, director Yukiya Amano should stress that Iran remains in compliance to its JCPOA obligations while the US, Britain, France, Germany, and the EU breached theirs.