Donald Trump, Antichrist-In-Chief at the Whore of Babylon

Word is spreading around Latin America that Donald Trump is the Antichrist. So, I did a survey of Latin Americans plus some Biblical research.

Many people envision a wicked being of the West with evil supernatural powers. (Picture a reddish beast with horns and talons on its tiny little hands.) An evil being that is indestructible for a little while and which must come just before Jesus Christ returns.

Donald Trump is of course not reddish. He's orangish! Like an Oompa Loompa from some Willy Wonka movie. Although his hands are indeed rather small, who's seen any talons on them? And no horns, at least none that have been reported about previously. And how many people have groped Donald's head to probe for horns? Or look for three 6's.

No doubt, yet more Communist Eastern European whores can do a grope and search of Donald Trump's scalp for horns. And three sixes.

His hair does indeed have an otherworldly quality, some have said, while yet others have speculated he has fake hair. From the Hair Club for Men, a fake hair network.

Without a doubt, there is a very otherworldly aura to Donald and Melania Trump together. A few survey respondents noted that Melania looks (and sounds) like she "just stepped off the mothership." 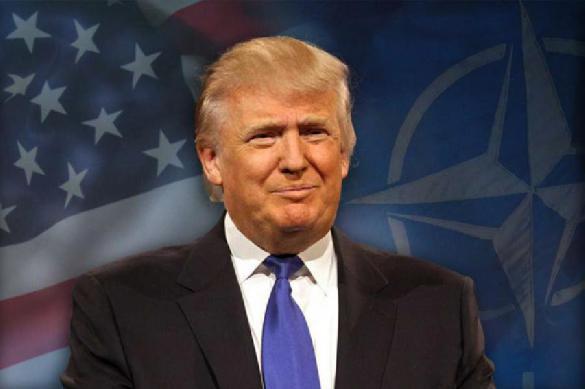 Although that appearance - fake face plus other fake features - may also be because of too much plastic surgery.

More than a few survey respondents decried that Melania, Trump's third wife, is an illegal alien and Trump's anti-immigrant stance is obvious hypocrisy in light of the truth about his third (and still current) wife, Melania, who was born Melanija Knavs on April 26, 1970 in Novo Mesto, Yugoslavia.

Melanija remained barren and unmarried until she was 35 years old. Why did she wait so long to get married and to have a child? She worked as a $500 an hour "model" in New York City until her mid-30's, perhaps that's a factor.

A Latino survey respondent who appeared to be well educated and highly intelligent dryly noted that Gorbachev was to the USSR as Trump is to the USA, before adding on that if Trump truly is the antichrist, perhaps he will claw and climb his way up to UN Secretary General from the White House. Or from Mordor Tower Trump Tower.

(The United Nations is on East 48th Street, a short claw and climb from Trump Tower on East 56th Street.)

A Mexican respondent, who lived in LA a few years, recited a famous Mexican saying 'So far from Heaven, so close to the United States.' Then he added, 'one nation under the antichrist, totally divisible, CalExit first then TexExit, with liberty and justice for none. '

In a one-on-one interview with former Mayor Ed Koch, earlier this century, Mr. Koch stated that his publicly declared depiction of Donald Trump as "piggy, piggy, piggy" was a vast understatement of Trump's greed, pride and vanity (all deadly sins antithetical to Christ's teachings).

Many older people recall the depiction of the antichrist from the 'Don't Get Left Behind' series of New York Times bestselling books from the turn of the century as well as that 1970's hollywood classic 'The Omen' which depicts a younger, more photogenic Antichrist living in shameless luxury in the American Embassy in London.

The Hollywood coven-in-chief back then in the 70's, rather tastefully, omitted any graphic depictions of the sexual immorality, the bestiality, that went down between Fredsie the antichrist's daddy and a jackal resulting in the jackal's pregnancy and the subsequent spawning of the baby Donald the baby antichrist.

The word 'Antichrist' appears four times in the Holy Bible. 'Antichrists' is written about once. All in First John and Second John, two short books (quick reads) just before Revelations. The Holy Bible mentions that there is not one, but many Antichrists and that they do not acknowledge Jesus Christ as having come in the flesh.

It is very simple for Mr. Trump (and Mr. Pompeo, his right hand man who's obviously a fat spoiled greedy glutton, a fake Christian) to disprove the widely held Antichrist belief by simply stating publicly an acknowledgment that Jesus Christ did indeed come to our planet in the flesh.

Interestingly, Latin America has a Muslim minority just like North America. Muslims who responded to survey questions let me know that Muslims love and adore Jesus and that Muslims also believe that Jesus is the Messiah (al-Masih in Arabic).

Mahdi was mentioned. Mahdi, according to Muslims, rids the world of evil and rules for several years before Judgement Day.

Isa is the Arabic name for Jesus. Several Muslims let me know that Dabiq, a town in Syria, is to Islam as Megiddo (Armageddon) is to Christianity.

One Shia Muslim stated the wars in Iraq and Syria are wars to try to control the real estate with the door that Jesus will return through (in Iraq) and the real estate in Dabiq, Syria.

One Sunni Muslim stated that one aspect (of many) to the lingering Israeli-Arab conflict is who controls the land with the door through which Jesus will return.

Two Imams verified that Muslims believe Jesus is the Christ, that Muslims love, absolutely love Jesus and that Muslims too have the concept of Antichrist (al-Masih-ad-Dajjal in Arabic).

Dozens of reporters have routine access to the White House and to Donald Trump (and to Mr. Pompous). Any one of these reporters can pop the question to Trump (and Pompeo) and then report on the response.

Mr. Pompeo instituted mandatory Bible study groups at the Central Intelligence Agency (CIA). (Who wouldn't want to be a fly drone, a fly on the wall, so to speak, for such CIA study groups!) Many of the CIA Bible study group leaders still have access to Pompeo.

Trump sometimes has a group of greedy spoiled filthy rich Evangelical preachers over to the White House. Hell, anyone coming in contact with Trump (and Pompeo) can pop the question to them: do you acknowledge that Jesus Christ came in the flesh?

(And anyone bold enough to pop that question to Trump and Pompeo can also ask a bonus question, what do you think about The DaVinci Code by Dan Brown, yet another New York Times bestseller from just about the turn of the century.)

And that'll be that. That will confirm or deny the word which has spread so rapidly all across Latin America that Trump in an Antichrist.

A couple books (a couple pages) past First John and Second John is Revelations, which in Chapters 17, 18 and 19, give a description of the whore of babylon as being a slut of a nation, a smug, arrogant, sexually immoral bully of a nation jam packed full of spoiled greedy filthy rich people living in shameless luxury. One which committed sexual immorality with Kings (Prime Ministers, Presidents, leaders) of this world, who made many people drunk with the wine of its sexual immorality and made the merchants and cargo ship people rich.

Beyond any shadow of a doubt, the US government people are the sluttiest, smuggest, most spoiled, most arrogant, biggest bully of an empire that ever crawled the face of the Earth.

(And way beyond any shadow of a doubt, Washington is a swamp full of swamp creatures. Brownie points to any nation making mention publicly of this obvious fact which strikes such a cord with the vast majority of Americans.)

Without ever making mention of the diseases (gonorrhea, syphilis .....), the unwanted pregnancies, the abortions and the unwanted unloved children (who then become adults) ..... that result from sexual immorality.

And yes, the CIA could a shown Trump the vast collection of American whores they "recruited" and "trained" (wink wink) and should a done more to keep him from the Communist Eastern European women he so obviously has become hooked on these past seven decades.

The buck stops with Donald Trump (not the queen of torture) for every felony committed by CIA people. (And for every family insulted by CIA people and the myriad of felonies they commit every day against a seemingly ever increasing number of Americans and non-Americans alike.)

And if the CIA has metastasized into some rogue agency then it's time for it to be dissolved. Like Alka Seltzer. Plop plop. Like the wicked witch of the west.

The CIA was hatched in the late 1940s to be the google of its pre-internet day to provide honest accurate information to the President and Congress.

The Frankenstein monster that the CIA has metastasized into was not made to be the biggest pimp on Earth with the largest ever stable of whore prostitutes (male and female) in human history. Nor to be the largest ever criminal gang of mass murderers and serial killers terminating more people (Americans and non-Americans alike) each decade (decade after decade after decade ...) than any criminal gang that has ever existed.

And we all know what happens after that.

The devils bargain is an age-old well known parable to believers and non-believers alike.

The CIA bosses have most of their very own agents rubbed out, murdered within 15 years of recruitment. Dead whores tell no tales. Ever wonder why so many CIA agents are so young. Logan's Run.

The CIA (and NSA) were never intended to be rolling out a global zersetzung state (aka global surveillance state) which they are currently rolling out. But, they want absolute power over absolutely everyone absolutely everywhere in this world.

They have enough profiling data (mostly from your use of phones and computers) to target billions of people for either recruitment or zersetzung.

Author`s name Contributor submission
15:58
Merkel's remarks about Minsk Agreements were 'petty and disgusting' – Lukashenko
15:02
Viktor Bout says he did not come across Russophobia in US prisons
12:02
Massive fire burns OBI hypermarket at Mega Khimki Shopping Mall to the ground
16:48
US basketball player Brittney Griner exchanged for Russian entrepreneur Viktor Bout
16:31
Zelensky believes Ukraine conflict may end in 2023
20:46
The West is expecting, but not pressing Russia-Ukraine talks
18:27
Putin: The threat of the nuclear war is rising, why deny it
17:17
Ukraine modenises Soviet Tu-141 Strizh drones
15:24
Ukrainian combat drones capable of flying at speed of sound may strike Siberia
14:35
Russian Army continues successful offensive in Krasny Lyman direction
Polish writer shocked to find out Russians will not rise to topple Putin