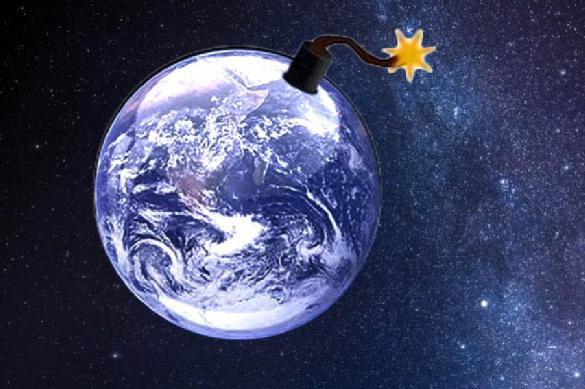 Today's Political World at a Glance

Global politics is overwhelmingly becoming robotic when question of safeguard of the mankind comes up. Global political leaders are fast becoming actors on stage - issuing abstract statements of outrage and phony sense of grief when thousands and millions of human lives are constantly bombarded by the weapons they manufacture and sell to crush the human soul and to support the war economies. The UNO and its Secretary General and the UN Security Council - all are just debating clubs engaged in time killing exercises to deceive the mankind and to betray the ideals of the Charter to "safeguard the humanity from the scourge of wars." Many top UN officials are paid employees with no sense of accountability to the global community. The reality of man-made catastrophic conflicts enhanced by national interests and war-led economies are ingrained in the war racketeering plans across the globe. The 21st century knowledge-based informed mankind is the net victim of the global political monsters. Millions of human beings are forcibly displaced, evicted by plans and charcoaled by forbidden chemical weapons across the Middle East yet; most global leaders do nothing to prevent the aggressive catastrophes except statements of fake 'outrage' reaction as if others were inhuman casualties. We are witnessing abnormal political culture of human bloodbath as being normal.

The global community - a divided and dispersed mankind is unable to challenge the war racketeers and global hangmen who claim to be political leaders. They are egoistic professionals with big mouth without wisdom and full of self-engineered false democratic clichés, contradictions, distortions and misrepresentation of the rights of common citizens in modern democracies. These are frightening trends for the present and future generations to survive. Most of the economically influential actors occupy the political platforms - either through backdoor conspiracies or entrenched political intrigues. They profess to be intelligent and outspoken for the rights of the people but in reality are offensive to truth and listening to voices of reason and honesty. How do we call for a balancing act in a world terribly imbalanced by nationalism, political and economic ideologies of supremacy and shallow imaginations and practices of human equality, human rights, peace and harmony amongst all the diverse segments of the living humanity?

We cannot abandon the search for a better and more rational world of systematic mechanism to protect the peace and security of the mankind on this One Planet. We, the People, We the Humanity and conscientious thinkers and scholars must wake-up to the immense sophisticated and technologically advanced challenges to disconnect us from the Nature of Things and to dehumanize us by global scenarios of ethnicities, nationalism, state borders and cultural superiorities and ruling class distinctions. William Godwin (Enquiry Concerning Political Justice and Its Influence on Modern Moral and Happiness, 1793), said it right:

Men of genius must rise up....to analyse the machine of society to demonstrate how the parts are connected together... and point out the defects and remedy. It is thus only that important reforms can be produced...He who is a friend to general happiness will neglect no chance of producing in his pupil or his child, one of the long-looked for saviours of the human race.

Do We, the People, Realize to be One Humanity on One Earth?

We are One Humanity on One Planet and we have a right to be here in peace and harmony, not in conflicts, not collaborators to kill the mankind and destruction of the human environment and habitats. This will be contrary to our Nature and inhuman if we cannot come to terms with our peaceful co-existence, identity and responsibility being the chief guardians of the living planet in a living Universe.  We, the humanity lives on a balanced Planet - Earth located at a measured distance from the Sun and Moon and other stars. God created the Universe and blessed it with all functionalities and provisions for life-sustaining factors since millions and billions of years. Do you realize if there was no water, no oxygen or hydrogen and other gases or sun light to support all the living creations - what would have been the shape and form of life on Earth?

Could we the human kind count the blessings of God to maintain life for millions and billions of years on this planet?  All things exist in a mathematical order, whether we recognize it or deny it. So strange, we know all about other material things and scientific - technological developments but we are ignorant and arrogant to learn about our own origin and existence on a living planet. We are born from mother's tummy - one and the same all over the globe - One Humanity. Yet, we dare to challenge each other with nationalism and ethnic superiorities and indulge in wars and deaths and destruction of our own beings. Are we the human being intelligent enough to know about our own existence and Purpose of Life?  How could we imagine peace and harmony amongst ourselves when we bomb and destroy each others with weapons of destruction as if we were not the human kind but some kind of animals without any sense of rational thinking?

We, the People of Conscience can only correct the political fallacies if we are united and blended together with reason and accountability to be the savior of our own world. We must awaken the minds and soul of the 21st century humanity to synthesize the vitality of peace and human security in a world of time and opportunities for political justice, equal rights and participation to be part of the change phenomenon for a better and more promising world of tomorrow.  The voices of reason will echo across the globe if we together are committed and united for this idea and human ideals. We strongly believe that knowledge-based wisdom, plans and actions will lead to benevolence and global harmony, peace and justice and will nullify the malignity and political tyranny from the 21st century highly challenging and competitive world. When We, the People articulate cooperation and understanding in societal diversity, it will replace the impulse and urge for competition and unjust indulgence to destroy fellow human beings.

Political Propaganda:   War as "Noble" but Truth and Peace are Offensive

Strangely enough, warmongers hire war propagandists to classify wars as "noble", "good", necessity of the ruling nobility and to protect the flag, borders and national interests. George Bush claimed being "Man of God" who started the day with the Bible, to orchestrate the bogus war on terrorism. These are cynical notions implied to enforce the monstrous viewpoints of the few warlords in every age.  Professor Camillo "Mac" Bica, School of Visual Arts, New York City and an activist of Peace and Justice ("Atrocity and War", OpenedNews), offers a penetrating insight on the inequality criterion and falsification of information and facts of human life.

Having been indoctrinated by the propaganda of those whose militarism and warist agenda requires acceptance of the mythology of the "good war" and the "noble warrior," the uninitiated and unaffected most civilians and many non warrior members of the military fail to realize this truth, that all war is barbarism in which cruelty and brutal atrocity is the norm rather than the exception. During World War II, for example, often cited and celebrated as the "good war," over 50 million civilians were murdered by both Axis and Allied Nations. The American servicemen in the Wikileaks video who so nonchalantly "engaged the target" slaughtering some 12 human beings are no different from the pilots and bombardiers from the "greatest generation" who with equal nonchalance, incinerated millions of civilians during the terror bombings of Hamburg, Dresden, Tokyo, Hiroshima, Nagasaki, etc. Despite the moral depravity of their actions, these individuals were not born killers. Rather they were created to do our bidding, first conscripted or lured into the military with promises of employment, a college education, or U.S. citizenship, then subjected to sophisticated indoctrination techniques of value manipulation, moral desensitization, and psychological conditioning, aimed at destroying/overriding their humanity, their moral aversion to killing, reinforced by the violence and horrors of the battlefield environment.

Blame Games of Distortion and Prejudice against the Informed Humanity

To be united in global political diversity, We, the People must exercise forbearance, canons of rationality and strive for blended unity of mankind - the core of human understanding and harmony. Leaders who want to lead must have rational thinking and followers to claim leadership effectiveness. Most contemporary leaders are devoid of REASON as the focal point of policy formulation and decision-making in global human relationships. Often they use blame game and popularity numbers to score fictitious rating in public eyes. Most leaders are infected with this syndrome and egoistic sickness to remain influential and powerful.

To protect the mankind from further dehumanization and annihilation, People of new ideas (Idea Men) are needed to take initiatives for political change - indeed a navigational change at  this critical moment: a New UNO with people's leadership, New Global Political Systems of Governance planned and developed by the people of knowledge and integrity and rejecting Hobbesian "wars of all against all"; and producing a rational rebuttal to the war of insanity, torture, political tyranny, inept global leadership and offer a balanced new vision of a world enriched with learning knowledge of rational policy-making and decision-making, human equality, fairness, protection of life and its natural support systems, and the Universe and equal justice for all the living beings on this planet. The leaders have not learned from the imposed deaths and destruction of the Two World Wars. The Third World War is already in progress in Syria, Palestine, Iraq, Yemen, Libya and soon to engulf many self-made tribal Arab kings, princes and authoritarian dictators.

Surely, We, the People could create a better and more sustainable world of today and tomorrow. A natural sense of piety and political wickedness cannot co-exist in one human character as most of the world leaders pretend to be. We must THINK and ACT outside the global box of political wickedness and cult of political allegiance to the few and sickening political minds of egoistic leadership. Time and history are not going to wait for the few insane outrage, phony statements on human deaths and destruction unless we take this challenge in its time and opportunity to make things happen  for change and for the best of all mankind. The Divine Revelation (Al-Qur'an) states clearly: "Intelligent people always readily accept advice."

American historian Harry Elmer Barnes ("Perpetual War for Perpetual Peace: A Critical Examination of the Foreign Policy of Franklin Delano Roosevelt and It's Aftermath"), offered this stern warning to American politicians if the US led wars continue leading to man's annihilation from this planet:

"If trends continue as they have during the last fifteen years, we shall soon reach this point of no return, and can only anticipate interminable wars, disguised as noble gestures for peace. Such an era could only culminate in a third world war which might well, as Arnold J. Toynbee has suggested, leave only the pygmies in remote jungles, or even the apes and ants, to carry on 'the cultural traditions' of mankind."