Made in the US Hong Kong Protests?

Made in the US Hong Kong Protests? 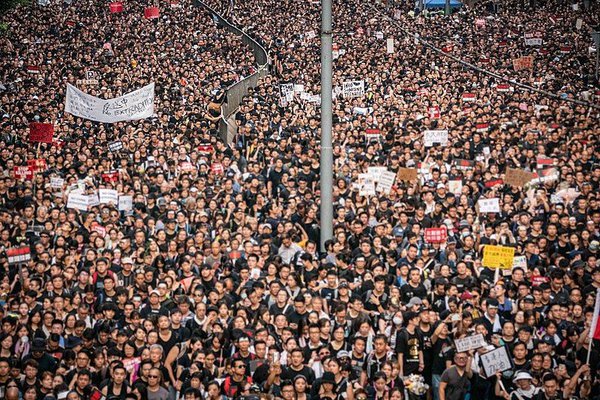 Time and again, things making headline news in the West aren't as they seem.

Protests ongoing for weeks in Hong Kong are much more than about opposition to its extradition to Beijing authority legislation - the measure proposed by pro-Beijing lawmakers, governing with majority control.

China state media called demonstrations and related violence a "conspiracy with the West."

China's Global Times (GT) said the city's "future won't be held hostage by (the) opposition and its Western supporters," adding:

"(I)nternational forces have increasingly collaborated with the opposition in Hong Kong."

Two opposition groups visited the US in March and May. They met with House Speaker Pelosi and Pompeo, clearly discussing anti-Beijing strategy.

"Washington has been particularly active in meddling in Hong Kong affairs...to pressure China," said GT. The US is collaborating with opposition elements, its longstanding practice in sovereign independent countries it doesn't control, a flagrant international law violation.

After crashing the parliament's front gate, they stormed the building, sprayed graffiti, and clashed with police violently.

What's going on has CIA and National Endowment for Democracy (mandated to eliminate it wherever it exists) fingerprints all over it, Beijing clearly furious about US involvement in what's going on - a hostile action against its sovereignty.

RT reported that anti-government provocateurs "tore down portraits of the city's leader, Carrie Lam, as well as Chinese President Xi Jinping. (They) also scrawled political slogans across everything in sight, walls and floors included."

What's going on requires orchestration and leadership. The US has a long disturbing history of meddling in the internal affairs of other countries, allies and adversaries alike worldwide.

"There's nothing better (sic)...(U)nfortunately, some governments don't want democracy" - notably the US, other Western nations and Israel, the notion banned by hardline extremist regimes running these countries.

GT said "(w)hen protestors stormed the Hong Kong Legislature, it was an open and symbolic attack aimed at expressing contempt for the rule of law while trampling on the fundamental interests of society."

No nations condone violence and other destructive behavior, especially when directed and/or supported from abroad, the case in Hong Kong.

In the US, Britain, France, elsewhere in the West, and notably in Israel against Palestinian protesters, police and other security forces often attack them violently without just cause.

Plenty of violence erupts during US-staged color revolutions and old-fashioned coup attempts, Venezuela experiencing it under Obama and Trump, along with numerous other countries earlier, Iran a prime target for 40 years, Cuba since its 1959 revolution.

Hong Kong is Western-influenced from nearly 150 years of UK control, the city returned to China in 1997 under a "One Country, Two Systems Condition" that's clearly untenable longterm.

Establishment media reporting on what's going on is reminiscent of the false Western narrative about June 1989 events in Beijing's Tiananmen Square.

Violent protesters were responsible for what happened, not soldiers. The fictitious narrative persists in the West, demonizing China the way all sovereign nations the US doesn't control are vilified.

The CIA was involved in 30-year ago Tiananmen Square events to destabilize China, the same thing going on now in Hong Kong.

China and other sovereign independent nations have no partner or ally in Washington, its ruling authorities seeking to transform these nations into US client states.

US-orchestrated violence in Hong Kong may or may not spread elsewhere in the country.

World
USA should always remember it keeps part of Russia - Alaska
15:05
Polish ex-MP reveals why NATO won't help Warsaw in war against Russia
14:21
Belarusian militant captured by group “O” tells about the last battle with the Russia
14:01
Russia stops Ukrainian military from planting Ukrainian flag on Snake Island
13:32
Former adviser to US Secretary of Defense: Ukraine may disappear from the world map
12:46
Boris Johnson resignation: Another one bites the dust
12:33
Sky News: Boris Johnson agrees to resign
21:21
The Future of Extremist Populism in Contemporary American Politics
20:39
For the sake of profit, the West is ready to make the conflict in Ukraine endless
19:22
Expert reveals how Russia can respond to Western threat without nuclear weapon
18:57
US military expert: Russian victory in Ukraine is predetermined
РусскийDeutschFrançaisPortuguese