The controversial liberation of Italian citizen in Syria 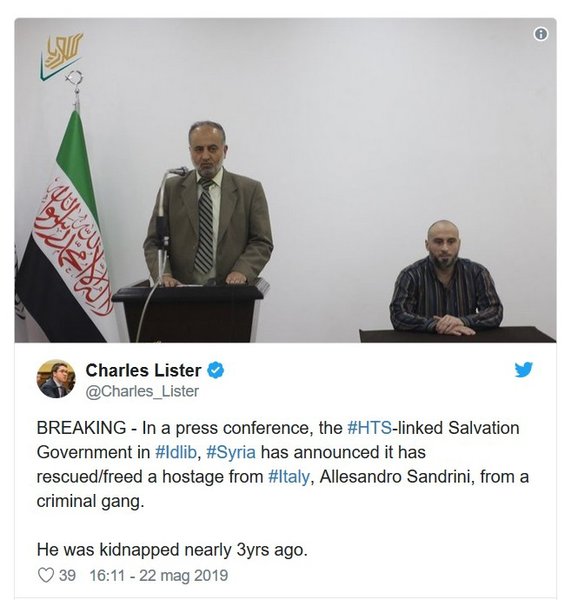 Syria seems to have become the land of miracles, the only place in the world where terrorists can suddenly become life saviors, or at least that's how it is being depicted.

"In a press conference, the #HTS-linked Salvation Government in #Idlib, #Syria has announced it has rescued/freed a hostage from #Italy, Allesandro Sandrini, from a criminal gang".

Quite amazing. The al-Qaeda*-linked terrorist group Hayat Tahrir al-Sham* (HTS) rescued the Italian citizen from a gang of criminals who held him captive for three years without managing to obtain a cent. Additionally, during the press conference, the HTS spokesperson claimed that 34-year-old Sandrini was being held by a gang "specialized in kidnappings and robberies", which raises the question on how they did not manage to earn anything from Sandrini's captivity in all that time.

According to information released by the Italian newspaper Repubblica it seems that in order to secure Sandrini, the police negotiated his liberation through some intermediaries and they then proceeded to contact the Italian government to plan the liberation.

The fact has been confirmed by Italian PM Giuseppe Conte, as reported by Ansa news agency:

"The compatriot Alessandro Sandrini was freed at the end of an articulated activity conducted, in foreign territory, in a coordinated and synergistic manner by the Italian intelligence, the judicial police and the MFA crisis unit".

The first logical question that arises is: "Was a ransom paid for his release? And if yes, who paid for it?"

If no ransom was paid, then why would a group of professional and "specialized" criminals decide to release the Italian citizen without receiving anything in exchange?

The timeline of Sandrini's story, as reconstructed by the Italian media, is particularly interesting as on October 3rd 2016 he boarded a plane from Bergamo to Istanbul and then on to Adana where he disappeared a few days later.

One year later, in October 2017, he called home for the first time saying that he had been kidnapped. The phone call was followed by three more where Sandrini said that the criminals wanted money and that the Italian government wasn't doing anything for his liberation.

On July 19th 2018 Sandrini appeared in a video, wearing an orange jail-suit, kneeling in front of two armed and masked individuals, but without any type of banner behind. In such occasion he again asked for assistance.

Then total silence, until today's press conference organized by the jihadist group Hayat Tahrir al-Sham* in Bab al-Hawa, where the terrorists claimed credit for his release.

What an amazing timing, as the United States have just accused (so far without any evidence) the Syrian government of using chemical weapons against the so-called "rebels" in Idlib. An interesting coincidence as the Idlib area is the last anti-Assad stronghold left and it is interesting to notice how this stronghold is in the hands of Hayat Tahrir al-Sham*.

It is legitimate to think that the terrorist group HTS* has full interest in legitimizing itself on an international level as it is now a matter of survival and it would not be a surprise if some foreign powers would be willing to work with the terrorist group on such initiative with the objective of confronting the Syrian government and its Russian ally.

As to Alessandro Sandrini, once back in Italy he will be interrogated by the Attorney's office and in addition he will also have to face judicial actions because, as reported by Ansa news agency, he is wanted by the Italian authorities for robbery and sale of stolen goods.

Author`s name Contributor submission
Topics syria
18:54
Ukrainian soldier uses chainsaw and fire to release US howitzer from ice trap
18:30
Onet: Ukraine will lose in six months due to shell shortage
14:17
Russians buy more than 50 tons of gold in 2022
13:34
USA's plan to give 20 percent of Ukraine for peace hoax
19:57
Russia will use all of its military potential to counter Western arms supplies to Kyiv
18:34
Biden changing strategy on Ukraine to reach diplomatic solution with Russia
17:36
Consequences of NATO's possible supplies of fighter jets to Ukraine get clear
15:16
Ukrainian forces suffer heavy losses while trying to cut across Dnieper
13:35
USA's next step is to suppress European economies
12:52
Victoria Nuland turns herself in about Nord Stream blasts
Medvedev: Ukraine as a state to be devastated, go bankrupt and be turned into colony