Massacres of Muslim Worshipers in Christchurch: Tragic Insanity at Place of Worship

by Mahboob A. Khawaja, PhD. 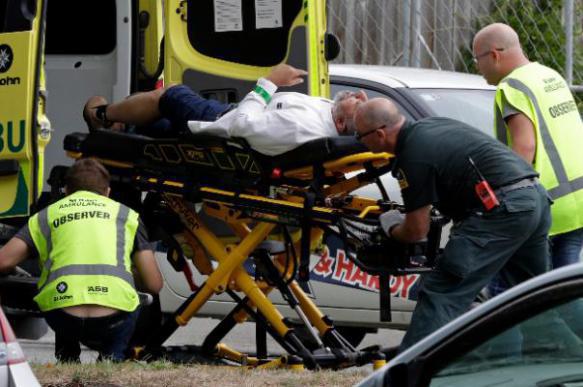 "And if we do act, in however small a way, we don't have to wait for some grand utopian future. The future is an infinite succession of presents, and to live now as we think human beings should live, in defiance of all that is bad around us, is itself a marvelous victory."

Tragic Insanity at Place of Worship

Killing of the innocent people undoubtedly is a crime against humanity. The global political consciousness is obsessed with terms like "terrorism", "Islamophobia" and "extremism", not knowing its reality and how and why it is happening across the globe. The 21st century global humanity is conscientious how some political propagandists besiege the people with false flags and imagery to incite hatred, violence and human destruction in societies having systematic liberal democracies. Often leaders make or break the abstract imagery of the merchants of catastrophic evils with racial overtones as if color and ethnicity are supreme than the equality of human norms.  The NZ suspect killer Brenton Tarrant was greeted at the AlNoor Mosque entrance - "Brother Assalamo-Alaikum" Brother welcome in Peace, but he gunned down the very person who welcomed him at the mosque. BrentonTarrant played a live portrayal of his insanity on social media for more than 30 minutes to entertain millions of sickening minds with cruel revenge and savagery on the innocent 50 Muslim worshippers at Christchurch two mosques. The men of God had no idea what was in-waiting for the ultimate insanity to be performed. There are 50 or so critically injured under treatment. It represented hatred and inhumanity in its worst form and action. Not surprisingly, his 'manifesto' corresponds to the prevalent policies and practices of the Far Right White Supremists in the Western societies as it does to the stance of President Trump. The attacker believed that Muslim refugees were there to take over the European culture and civilization. Islamophobia is not an abstract phenomenon but a highly organized socio-political pursuit in many Western cultures aimed at dehumanizing the Muslim population with fear and hatred across the board. Thomas Paine (The Rights of Man) said it wisely: "man is not the enemy of man but through the medium of false system of government....the wisdom of nation should apply itself to reform the system."

We, the People and We the Humanity

As informed rational global citizens, out of this unexcitable shadow of darkness we look for the unity of human consciousness in situations of abnormal crisis and bloodshed. An ideal specimen of humanity and compassion was extended by the New Zealand Prime Minister Jacinda Ardern who took immediate action to protect the beleaguered Muslim community with sympathy, understanding and protective measures. It was convergence of all humanity on shared moral and religious sentiments that we are One Humanity before God and that benevolence and freedom of worship unites us in bonds common across the universal landscape. Contrary to the attacker's imagination and plan, the people of New Zealand, Australia, UK, Canada, USA, Turkey, Pakistan, Russia and Scandinavian countries and other parts of human civilizations poured in condolences and resolve that the mosque's killings were act of terrorism and unjustifiable and unwarranted in the civilized world. The global reaction appeared rational in a spirit of universal compassion and understanding.

What motivated the attacker to target Muslim worshippers at the two mosques in Christchurch?  The answer lies with a thorough police investigation currently in progress but the agenda and the manifesto of the attacker ( sent to the NZ PM) leaves no room for speculation except the reality of the Islamophobia pretext. The world we live-in, all human action are interconnected to the socio-economic and political environment that we encompass. Our thoughts, faculties and values are the possession and means by which we compose our outlook, behavior and priorities. If the attacker was inspired by the overwhelming Western pursuit of "Islamophobia" and wanted to secure some hallmarks by acts of sadistic brutality against the innocents, he was wrong and foolish, it demonstrated a global will and resilient to be united against the perpetuated evil and insanity. Instead, it revived a moral and intellectual capacity and passion to stand against the evil mongering, white supremacy and religious intolerance. Agreeably, the notion of evil does have an idea of force and power across the 21st century world that we live-in. We have seen it happening in America under the Trump Presidency and in Eastern Europe during the recent Middle Eastern refugee and migration crises.

Are We Seeing a Moral and Intellectual Decadent Human Culture?

Recall that during the Two World Wars in Europe, millions and millions innocent civilians had perished in aerial bombings, political tyranny and forcible displacements. History is living not dead.  We the 21st century conscientious and informed citizens must realize to eliminate insanity, tyranny of destruction, ethnic conflicts and religious bigotry.  Moses, Jesus and Mohammad preached the unity of mankind, respect and tolerance in adversity. None of the Messengers of God taught evil, intolerance and disrespect against the believers. If we are witnessing it in the 21st century liberal democracies and immature leadership, it cannot flattened the moral, intellectual and political landscape as " No Man's land" of the white-supremacists be it in America, NZ or elsewhere. Violence, killings and maltreatment of the citizens cannot be transformed into virtue of democracy or clash of fanaticism disguised in any political ideals of the individuals, political agendas or so called leaders. There is nothing good in evil for the mankind and it does not correspond to the Nature of things within the Universe that we co-exist except thoughts, shapes and forms of individual human behavior. If it was an overwhelming ethnic and religious hatred against the believers at the two mosques. Sanctity of human life and its sole purpose must be preserved. Brenton Tarrant should have known that Islam teaches respects, compassion and honor for the faithful in Judaism and Christianity and others. It reminds Muslims that you are all equal before God - the followers of Abraham, Moses, Jesus and Mohammad and it is One Religion - One Ummah (Nation) to whom God enlightened with the Divine revelations, be it the Torah, the Bible or Al-Qur'an. You are One nation in the sight of your Creator.  The focal message of Islam (Al-Qur'an, Chapter 2:136) highlights the essence of natural bonds:

Between one and another of them: And we bow to God (in Islam)."

Towards Rebuilding Historic Flaws of Moral and Intellectual Gaps?

There are political tensions between the Western Powers and Muslim countries after the 9/11 tragedies.  The theory of "the Clash of Civilizations" has its own mythological impact. But for centuries, the Islamic world was victim of the European colonization. Its identity, culture and values were destroyed by the European imperialism and its borders were the outcome of planned Europeans polices of "divide and rule" across the larger part of the Islamic world. Muslims were subjugated to prolonged tyranny of domination and destruction. Those who convientenly blame Muslims and Islam for "extremism" and "terrorism" should rethink and read the living history for truth, honesty and justice. Western doctrines that led to colonization and terrorization of the Muslim people and their culture is unparallel in modern history. Yet, you will find across the 21st century Islamic people are open to communication, realist and compassionate to respect others and mend the bitter past for a better future and peaceful co-existence. We need to be people of reason and balanced between the obvious competing tendencies of political hegemony of any ethnicity and equality of all human beings as One before the Almighty God - a common belief and value amongst the Jews, Christians and Muslims of the Abrahamic Faith. We are living in a dangerous era of political change and exploitation and cynicism about politicians is endemic. It is a wake-up call to all believers to show their inner soul and strength that all believers stand together in unity and in peace to defeat the White Supremacy and its defined official policies and practices to purge the Far-Right White Supremacy's agenda.

Rationality needs objective reasons. Reflecting on the power of righteousness supplemented by demonstration of compassion and understanding that masses of the New Zealand, the Churches and Synegogs in NZ and Australia and public gatherings in other parts of the globe showed character of magnanimous forbearance and understanding rejecting the fallacy of Islamophobia and treacherous ambuscade of the attacker that Muslims were problematic in any rational context of contemporary affairs. We, the people, thinkers and scholars as the forbears of the message of human unity, wisdom and benevolence must reciprocate and build a universal capacity to usher message of peace, compassion and unity for the good of all everywhere in all mosques, churches and synegogs.  All intellectuals, politicians, societal thinkers and planners know the encompassing reality and imperatives of rational actions for human unity, societal harmony and peace: "if you think rationally, surely, you will find the solution."   Ferocity of killings, horrors of ethnic supremacy and religious-political animosity have no place in contemporary global affairs and are abject of degeneration and human blood should not be shed upon precarious motto of the white supremacy anywhere or by anybody.

"To be hopeful in bad times is not just foolishly romantic. It is based on the fact that human history is a history not only of cruelty, but also of compassion, sacrifice, courage, kindness. What we choose to emphasize in this complex history will determine our lives. If we see only the worst, it destroys our capacity to do something. If we remember those times and places-and there are so many-where people have behaved magnificently, this gives us the energy to act, and at least the possibility of sending this spinning top of a world in a different direction."