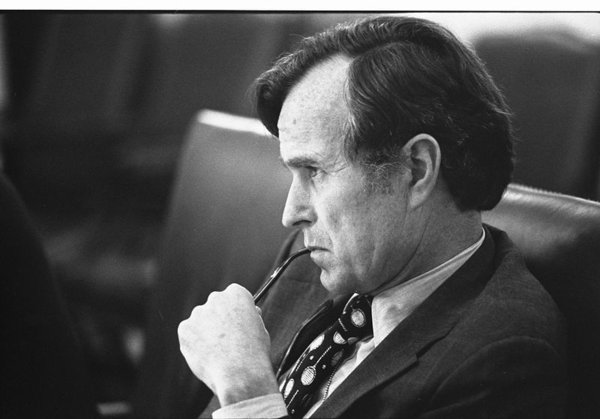 It's not pretty. It goes back over four generations - during and after WW I, closely connected to Wall Street and America's military, industrial, security complex.

George H. Walker and Samuel Prescott were dual founding fathers. Walker was a St. Louis financier, later working for Averell Harriman, a core member of US foreign policy elders known as "The Wise Men," along with Dean Acheson, George Kennan and others.

They were lawyers, bankers and diplomats, together when Truman became president in 1945, involved in creating the Truman Doctrine to counter Soviet Russia, the Marshall Plan to keep European countries from going communist post-WW II, and Cold War containment, Kennan the chief architect of containing the Soviet Union after Nazi Germany and imperial Japan were defeated.

Prescott Bush served as a US senator, Wall Street investment banker with Brown Brothers Harriman, as well as involvement with weapons and munitions producers.

In the early 20th century, the Bush family was connected to John D. Rockefeller's Standard Oil, later with Wall Street and the US intelligence community post WW 1.

Family members included a US senator, two governors, a congressman, vice-president, CIA director and two presidents, along with industrialists and investment bankers.

Prescott Bush served as a New York-based Union Banking Corporation director, a holding company for Nazis and German steel industrialist Fritz Thyssen in the 1930s and early 40s, its assets seized by Washington in October 1942 for violating the Trading with the Enemy Act.

Prescott was with Brown Brothers Harriman (BBH) when the firm had business dealings with Nazi Germany, continuing through the early years of WW II until its assets were seized.

As vice president in the 1980s, GHW Bush was instrumental in getting Washington to arm Saddam Hussein. As CIA chief, he was involved in covering up agency coups, assassinations of foreign leaders, and notable US figures JFK, RFK, and MLK.

As vice president, he was involved in secret talks with Iran, leading to the Iran-Contra arms-for-hostages scandal. With help from congressional members, including Rep. Dick Cheney, he remained unaccountable for lies, coverup and related crimes, enabling him to succeed Ronald Reagan as president in January 1989.

As president on September 11, 1990, preparing America for Operation Desert Storm, Bush told a joint congressional session that war on Iraq presented "a rare opportunity to move toward an historic period of cooperation," adding: "Out of these troubled times...a New World Order can emerge."

"Nations should develop and train military units for possible UN peacekeeping operations." America's permanent war agenda wasn't explained - nor anything said about using "peacekeepers" as imperial occupiers, along with getting NATO member states and others to ally with Washington's aim for unchallenged global dominance - endless wars its favored strategy.

In retirement, GHW Bush was considered an elder statesman, his past buried, forgotten and above rebuke - paving the way for another Bush to become president in January 2001.

Following his death, major media eulogized him. NYT editors claimed "profound differences between the 41st president of the United States (GHW Bush) and the current occupant of the White House, Donald Trump," calling the former president "gracious and modest...prudent (and) steady" - ignoring his disturbing public record.

The Washington Post quoted his chief of staff John Sununu, calling him a "great president...help(ing) (to) make America safer and the world more stable and more prosperous than ever before in history."

The Wall Street Journal quoted GW Bush, calling his father "a man of the highest character and the best dad a son or daughter could hope for."

The disturbing record of father, son, and entire Bush dynasty speaks for itself.

In an earlier article, I said behind every Bush there's a crime - the family legacy for over a century.