Matrix revealed: In the form of a modern car dealership

Matrix revealed: In the form of a modern car dealership 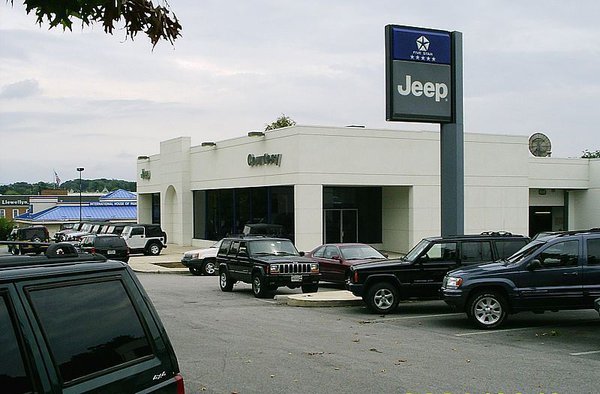 The modern dealership version cannot claim exclusivity to the matrix phenomenon. It was probably already at work when Henry Ford's national distributorship offered Model T's; you could have any color, just as long you always chose black. Matrix programming was also just as relevant too when William Durant reorganized General Motors in order for the corporation to emerge as the giant of American ingenuity and industry.

Look at GM now! The same impetus was at play when the Dodge Brothers jumped into the fray and the adjunct feeding frenzy for love of the great American automobile. In addition, consider all those fringe benefits that came with the experience: status symbol, freedom to hit the open road. Moreover, it gave the opportunity for the average Joe, Tom, or Salvador to explore the great outdoors. American version of course...

Mind you, the two bruhs had not yet invented the desirable 'Hemi' engine transplant, matched to the must have Ram pickup 'Builders' edition. The preceding I chronicled, as much needed context. That same need, forms part of a larger premise. There is none other more qualified and bettered versed in the English language to present this in proper perspective than renowned American economist John Kenneth Galbraith.

The learned professor put it this way (paraphrased): "To really get a feel for what the economy is doing at any given time, one must visit a car dealership. Step through the glass doors. Once inside the showroom floor, ice-cold reality will hit you in the face, like a slap on your rosy cheeks with freshly caught codfish.

Not really... It is the exact opposite. No matter what happens in the external environment, be it war, depression or just plain stasis, salesman, after salesman, including the entire phalanx of employees all agreed on one thing: Business could not be better! The sky is the limit, well, if you included the entire cosmos, plus the space between the black holes!" It was precisely in that self-same orbit, I entered the local Matrix Dome. Aka the county's sole Dodge dealership. Admittedly, this was not my first visit. Yet, something was afoot. For starters, a smartly dressed lass ushered me to the 'insurance desk'.

At first, I took umbrage. Gradually the angst feeling departed. She assisted though, and insisted I try their new self-brew machined coffee that seemed to flow like the endless praise that came my way, from everyone, starting with the 'car finisher' to the GM who sauntered past just one time. Just to get a feel for who it was that was well ensconced at the beginning of the tunnel-of-love for satisfied customers, er, patrons. Inside the beltway, my vantage point was spectacular; perfect in every regard. First, the young Asian lad popped his head out of his office. iPhone in one hand while the other clutched a recently pressed Starbucks latte, he winked his approval. Ahead of him, a middle-aged male seemed so sunk down in his Office Depot recliner, he gave the impression of a reincarnated Steven Hawking; replete with all the latest hardware and software attachment offerings.

The angelic being had several conversations on the run. Including, a side bar bet with the Asian lad. Closest to me, sat an operative, that I assumed was the dealer 'Ad Man'. He had to be. The white foldaway semi-collapsible table contained just about every periodical known to upright homo sapien man. In addition, the communications hardware was piled so high, he could only peek at me; though standing on tippy-toes. In return, I doffed my cap. Silly that I forgot do so earlier, on such hallowed floor. The main attraction lay at the end of the tunnel. The Sales Manager's office resided there. It was lit, just barely.

There were no signs of activity. Not even the presence of a smart phone wavering round. That all changed. In a bright flash, Brad burst on the scene. He covered the 20 meters almost as fast as Usain Bolt would run his victory laps. More important, he did not hit any hurdles. Alternatively, Brad did not knock anyone over either. Instead, he presented me the news. News that I awaited for days.

All smiles, he concluded. "You have been approved!" At, which point, he gingerly escorted me to Shar, the cashier. "She will take care of this." He though, was still clutching my right hand. I struggled to break free. A simple 'Thanks' worked. You see... I was there to collect a refund, after the dealership unwittingly sold me a 'lemon'. Did that really happen? On the drive home, my older but reliable high-mileage coupe, gave me a timely portent. The 'check engine' idiot lamp revealed itself.

Again. Not a problem. Experience told me exactly how to proceed. After pulling off to the road's shoulder, I lifted the bonnet. Yes, by all appearances, the motor and accompanying accoutrements were intact. Back inside the carriage, another message awaited. "Now connecting to OnStar" flashed along the top panel. Next, I heard my favorite ringtone. Odd, I do not own a cell phone. For good reason. No coverage in my neck-of-the-woods.