The climax of the Cold War was reached when the former American President Carter and European leaders Callaghan, Giscard and Schmidt decided in 1979 the deployment of nuclear warhead missiles with a range too short to make them start from bases in US territory but sufficient for the launch from European bases. England, Germany, Italy hosted the mobile launchers of the Pershing missiles and also the first generations of cruise missiles. The big Galaxy cargo carrying missiles were greeted in Germany by some demonstrations of protest but their arrival continued until the deployment was completed. The Soviet Union, fearing from the European territory a devastating first American strike against the bases of its intercontinental missiles, had already deployed the analogs SS20, in a much higher number than the NATO ones and positioned in the Warsaw Pact countries. 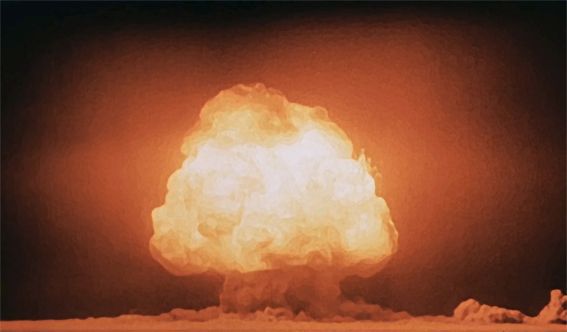 United States and Soviet Union threatened each other mainly with the great intercontinental missiles, but intermediate-range missiles were a threat from which US territory was exempt due to distance: in this case, the threat existed only for Russia and, consequently, for European countries.

The international agreements of 1987 between President Reagan and his Soviet counterpart, Michail Gorbachev, led to the signing of the Treaty on Intermediate Nuclear Forces, to the complete withdrawal of these weapons and their destruction. Both the INF treaty and others concerning different types of atomic weapons, seemed to promise the definitive removal of the nuclear war and the birth of a new world order, multipolar and oriented to a more relaxed diplomatic relations. The Soviet Union seemed still a monolithic entity and nobody suspected that in a few years it would be disappeared. The recent history is well known: the sudden dissolution of the USSR and the acute state of economic crisis in which all the former constituent countries were found (due to the pedantic application of absurd neo-liberal economic recipes by their governments) gave rise to the now finished American unipolar geopolitical parenthesis. The 9/11 internal terrorist attack was the excuse for the grand initiation of the US imperial wars and the project of conquest / destruction of Russia through the remodeling of the Middle East in a Western key, the extension of NATO to the former Warsaw Pact countries and the former Caucasian republics. Even the Balkan wars, although earlier than 11 September 2001, can be included in this "forward movement of the front" and considered in all aspects as a first attempt to rectify manu militari the Eastern borders of the Atlantic alliance and therefore of the American dominion.

The first Bush Jr. administration saw, also and unfortunately, the unilateral withdrawal of the United States from the ABM treaty, i.e. the treaty that prohibited anti-missile missiles: a very hard blow to the peace hopes that still remained in some people, as the ABM treaty had avoided until then an arms race inside the arms race. Russia immediately saw this decision as a very serious threat to its existence but apparently did not seem able to oppose an effective alternative that was not limited to diplomatic protests that Americans simply ignored.

Now the Trump administration seems seriously determined to withdraw even from the INF treaty, thus betraying the electoral promise to establish better diplomatic relations with Russia and instead handing the world to a new and worse Cold War.

Even now, the intercontinental missiles take about 30 minutes for their journey of death. In half an hour, a conscientious army officer can take the luxury of waiting even 5 minutes to see if what he sees on the screens is really the signal of a first enemy attack or the mistake of a satellite in confusion. So did, for example, Soviet colonel Stanislav Petrov in 1983, saving the world from destruction. However, in the case of intermediate-range missiles, the reaction range drops to less than 15 minutes. How many Stanislav Petrov there could be now?

I asked the well-known Valentin Vasilescu a technological assessment on the new INF issue, in the light of some structural weaknesses that are emerging in the American military apparatus.

1) Mr. Vasilescu, can you remind to our readers what you mean for intermediate nuclear forces and their technical characteristics?

A) Obligations under the INF Treaty of 1987 :  the USSR (then Russia) and the United States have destroyed all their ground-based nuclear and conventional missiles with a range between 500 and 5,500 km (short range, medium range and intermediate range).

Missiles with a range greater than 5,500 km do not fall under this treaty. They are classified as intercontinental ballistic missiles (ICBM). Under the INF Treaty, the United States has not built nor been able to place its nuclear missiles in Europe. Thus, the main beneficiaries of this treaty are European countries and Russia.

US Army destroyed their BGM-109G Tomahawk cruise missiles, based on ground in United Kingdom, Belgium, Netherlands, Germany, and Italy, range 2,500 km, speed 880 km/h, armed with miniaturized W80 nuclear ogives weighing 5-50 Kt, was part of INF Treaty. A cruise missile is a guided winged drone that remains in the atmosphere. The Cruise missile is propelled by a turbofan jet engine and flies its low altitude flight path (500 m) at constant subsonic speed.

In 2002, President of the US, George W. Bush withdraw US from the Anti-Ballistic Missile Treaty beginning the program of National Missile Defense (NMD). US deployed anti-ballistic shields SM-3 Ib/IIa, on ground, in Europe ( in Romania and Poland ), based on VLS MK-41 type from systems existing on the AEGIS cruisers of the Ticonderoga class. But VLS MK-41 can launch Tomahawk cruise missiles armed with nuclear warhead also.

President Trump's announcement to unilaterally withdraw the United States from the INF Treaty, does not seem to affect the United States. This is because the distance between the American continent and the European part of Russia is more than 5,500 km. US cruise missiles launched by VLS MK-41 from Romania and Poland travel at a speed 20 times slower than the ballistic missiles. From the moment they are launched cruise missiles, their thermal imprint can be traced by Russian satellites and could be destroyed by Russian antiaircraft missile systems and Air force.

3) How dangerous these new missiles could be for Russia and what countermeasures could the Kremlin take?

- Its motors must develop a propulsion of at least 75 000 to 100 000 kgf. In contrast the missiles that form part of the US anti-ballistic shields GBMD, SM-3 (Ib, IIa) and THAAD have a far weaker propulsion and are useless.

The only challenge President Donald Trump has left out of consideration is that the United States no longer has the rocket motors needed to build ballistic missiles. This shows that because the US is focusing so hard on creating antimissile shield, the budgetary cuts have resulted in a smaller pot of funds available for the design of new high power rocket motors.

Due to cuts in NASA's budget, most experts in the sections that belong to the special departments of Lockheed Martin and Boeing have come together and formed a company United Launch Alliance (ULA). This company buys rocket motors, assembles the components of the rockets, and creates new space vehicles that it then launches for the Pentagon and NASA to use. Thus, ULA assembles the US's most powerful US heavy rocket in service: Atlas V.  To launch, Atlas V uses two boosters with Russian RD - 180 engines. Atlas V's first stage also has a Russian RD-180 motor, produced by NPO Energomash.

Taurus I and Minotaur I are the new "light" rockets with 3 or 4 stages that Orbital Sciences Corp (OSC) has provided to NASA, using the stages SR19 and M55A1 coming from disaffected old ICMB ( LGM-118A, MX-Peacekeeper and LGM-30F Minuteman II )

In the period 2010-2013, OSC replaced the first two stages of the Minotaur I rocket with the motor NK-33. The NK-33 motors, delivered by the Russian company Energomash, are superior to those manufactured in the United States. Due to sanctions that the United States imposed on Russia in early 2014, the transfer of Russian technology (including technology from Energomash), was interrupted. The company Aerojet in collaboration with the designing office of Youzhnoye at Dnipropetrovsk-Ukraine has begun to produce the engines AJ-26-58/62. These are poor copies of the NK-33 U.  The Antares rocket transporting the US cargo Cygnus with supplies for the international space station (ISS) exploded 6 seconds after launch due to a fault in the design of the AJ-26 engine. There is a similar rocket, with a US SR19 stage (used by Taurus 1 and Minotaur I). It is composed of the fixed system GBMD (Ground-Based Midcourse Defense) and assembled by the OSC. GBMD (35 000 kgf) belongs to the Pentagon's Agency for anti-ballistic defense that operates in the bases of Fort Greely (Alaska) and Vandenberg (California). That is useless for a medium range ballistic missile.

Let us see where Russia stands on this issue of the rocket engines, which could be used for medium range and intermediate range nuclear missiles. The new Russian Angara rocket family (Angara 1.1; 3; 5; 7 and 100) use the motors RD-191. The RD-191 engine has the ability to modify the maximum traction of 200,000 kgf (100 to 30%) during flight. The nose of the engine has a gyroscopic platform controlled by computer, which allows its movement: up-down and left-right. The nozzle ensures vectoring traction, just like in case of the Russian jet fighters Su-30 and Su-35. Russia can design and build a new ballistic nuclear missile with a range up to 5 000 km in next 6 - 8 months.

Consequences :  unlike all the existing ballistic missiles, a new Russian ballistic medium range missile can be programmed to climb, descend, or make turns. The rocket may be provided also with 3-4 nuclear independent warheads. The current US antiballistic  missiles are effective only against ballistic missiles that don't change the trajectory during flight.

1. missiles SM-3 Ib/IIa deployed in Europe ( in Romania, Poland and on US destroyers and cruisers Aegis ),

Yet Romania and Poland are in a far more regrettable situation. This is because US anti-ballistic shields have been placed on their territory. Until now, the time you had to correct an error in accidental launch of an IBCM was 20 to 25 minutes. This represents the time it takes for an IBCM to travel from Russia to the American continent. However now, you have just 4 minutes (20% of the time you had before). This represents the time it takes for the IBCM to travel from Russia to Poland or Russia to Romania, a distance of around 1 000 km. From now on, Romania and Poland will become targets for 8 Mt ogives of Russian ballistic missiles, ogives that the US Shields will not be able to neutralize, and which have an enormous capacity to destroy the population and infrastructures.