The NFL is a criminal enterprise

The NFL is a criminal enterprise 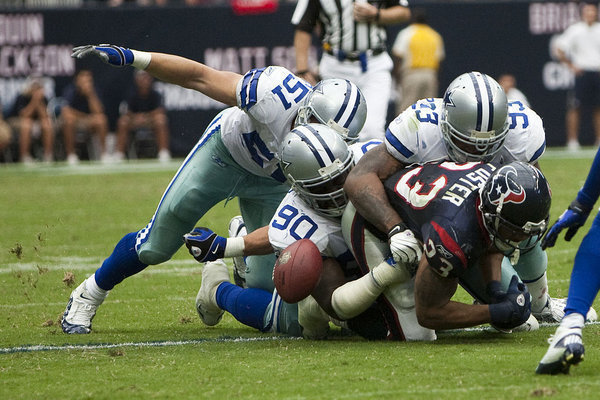 Imagine, if you will, watching one person beat another person in the head week after week until he/she suffers permanent brain damage, and perhaps even commits suicide.  Undoubtedly, you would call the person who inflicted these beatings a criminal.

Imagine further that people actually pay so they can watch and cheer as these beatings take place.  Undoubtedly, you would consider them to be accomplices.

Yet, pay people to absorb such beatings, display them in taxpayer funded stadiums, add in saccharine pontifications about "glory" and "honor," blend them with some high-profile advertisers and a fawning media, and suddenly you have a "sport."

And, despite all its pretensions about "concussion" protocols and "helmet contact rules," NFL owners know they are profiting from the damage their so-called "sport" inflicts upon its players.

This was evidenced by the fact that even though Thursday Night Football, due to the short time period between games, produces a greater number of player injuries, the NFL recently completed a five-year, 3.3-billion-dollar deal with Fox Sports to broadcast these Thursday night games.

And, if this isn't evidence enough of the NFL's callousness and greed, consider this:  from 1947 to 1960 the NFL's regular season consisted of twelve games; from 1961 to 1977 this number rose to fourteen; and from 1978 to the present day sixteen regular season games are played.

Some pundits have speculated that, after the United States Supreme Court legalized sports betting in all fifty states, the NFL might expand its regular season to eighteen games, thus increasing its revenue while also increasing the chances for players to be injured.

Under the Racketeer Influenced and Corrupt Organizations Act, to be considered a criminal enterprise, and thus subject to both criminal and civil penalties, an organization must commit two "predicate offenses" within a ten-year period.  The NFL not only meets these criteria, it has committed other crimes as well.

1.      Fraud:  Fans who attend games, networks that broadcast them, and businesses that advertise during them directly or indirectly pay the NFL to do so.  Implicit in this payment is the NFL's assurance that owners will acquire players and field teams that have the best chance of winning.

Yet, with the blacklisting (or more properly whitelisting) of quarterback Colin Kaepernick and safety Eric Reid, the NFL owners have demonstrated they are more concerned with sending a message to "uppity" players than they are with winning.  This was demonstrated by the fact that several NFL teams have admitted they consider Kaepernick good enough to be a starting quarterback.

This fraud has been exacerbated by the fact that, despite all its pretensions of "patriotism," the NFL was actually paid by the Department of Defense to "honor" the military at its games.

2.      Extortion:  To protest racial injustices in America's legal system, and other forms of institutional racism, Kaepernick and Reid knelt during the ritualistic playing of the national anthem.

In response, the NFL, at the prompting of Donald Trump, passed a "policy" stating that players must either stand during the anthem or remain in the locker room, or their team will be fined.  In addition to this, the team will have the right to fine the offending player as well.

Clearly it is extortion to intimidate someone through financial penalties to prevent them from exercising their constitutional rights.  Although some commentators claim that, as a private entity, the NFL is not required to abide by the constitution, Trump's threats-as I argued in my article I Love Free Speech; I Hate Free Speech (Pravda.Report, June 5, 2018)-to retaliate against the NFL for refusing to penalize protesting players have sufficiently intertwined the government with the "anthem policy" to ensure that the protections of the constitution do indeed apply.

3.       Involuntary servitude:  According to The New York Times, (May 2, 2018), during a trip to Costa Rica, cheerleaders for the NFL's Washington team (owned by Daniel Snyder) had their passports confiscated and were told to pose topless in front of "a contingent of male sponsors." Some of these cheerleaders were then required to attend a nightclub as "personal escorts" to some of these sponsors.  As one cheerleader said, "We weren't asked.  We were told."

But the NFL's misogyny (not a surprising tendency since many team owners openly support misogynist-in-chief Trump) does not end there.  Cheerleaders for numerous teams, including the Houston Texans (owned by Bob McNair), have sued over issues ranging from sexual harassment to unfair pay.

4.      Conspiracy to Intentionally, Knowingly, or Recklessly Inflict Grievous Bodily Injury:  While this has been addressed above, it is important to note that for years the NFL attempted to deny a link between Chronic Traumatic Encephalopathy (CTE) and football.  And now it has been discovered that CTE might not just be caused by concussions, but simply by repeated blows to the head.

5.      Conspiracy, in conjunction with State Actor Donald J. Trump, to deprive persons of their civil rights by violating the First Amendment's protection of Freedom of Speech, the Fifth and/or Fourteenth Amendments' Due Process Clauses, and the Fourteenth Amendment's Equal Protection Clause:  What makes the NFL generally despicable and hypocritical (and Snyder particularly despicable and hypocritical) is it  despises player protests against racism, and even conspires with the government to quash them, yet has absolutely no problem supporting racism, and fights vehemently against government attempts to quash it.

The nickname of Snyder's team is considered to be an opprobrium against Native-Americans, yet he arrogantly refuses to change it, and, in fact, profited from it through trademarking.  This was until the United States Patent and Trademark Office rescinded trademarks that were considered to be racially offensive.

Snyder fought these cancellations up to the Supreme Court and ultimately won when, in a related case, this court ruled that the government cannot ban disparaging trademarks.

Many critics have argued that the NFL's ban on anthem protests is simply a desire to "take politics out of sports."  Yet, as I was writing this article, Michael Bidwell, president of the Arizona Cardinals, shattered this illusion by posting on the team's website his support for Trump's Supreme Court nominee, Brett Kavanaugh.

The truth is that NFL commissioner Roger Goodell and a majority of team owners have no problem with kneeling, since, as demonstrated by their "anthem policy," they displayed no compunction about groveling before Trump.

This sycophancy also reveals their cluelessness.  As I wrote in my article The Huckabee Sanders Scam, Part Two (Pravda.Report, June 27, 2018), "You can never appease a fascist, so never attempt to do so."  This has been proven by Trump denouncing the "anthem policy" as "worse than kneeling."

The reality is that Trump doesn't give a damn about the anthem, patriotism, or the military.  Numerous videos indicate that he doesn't even know the words to the anthem; he received five deferments to avoid serving during the Vietnam war-four for college and one for "bone spurs"; and he denounced Americans who were prisoners of war during this conflict by saying, "I like people who weren't captured."

So, the NFL could force players at gunpoint to humbly bow and blow kisses at pictures of Trump, and it would make no difference.  As he told Dallas Cowboy's owner Jerry Jones, the anthem controversy is a "very winning, strong issue for [him]," and he's not about to let it go as long as he can exploit it to appeal to his fanatical fanbase.

Recently, the NFL has been trying to extend its tentacles into other countries.  While I realize that money almost always displaces morality, it is my hope that these countries will think twice before allowing this criminal enterprise to operate within its borders.

Also, in a few weeks, the NFL preseason will begin in America.  Last year many people, of all races, chose to boycott the league due to its whitelisting of Kaepernick.  Now, with the "anthem policy" and the whitelisting of Reid, it is clear the NFL still hasn't gotten the message.  So hopefully this boycott will not only continue but be expanded.

As I've stated in several previous Pravda.Report articles, since I've gotten older, I have begun to hope more deeply that there are such places as heaven and hell, because too many terrible people go unpunished here on earth.

If there is true justice, then Goodell, Snyder, Jones, McNair, Bidwell, Cincinnati Bengals owner Mike Brown, Denver Broncos general manager John Elway, and several other NFL owners, executives, and coaches will have to spend eternity on their knees with their lips permanently affixed to Trump's feckless, flatulent behind.

On second thought, maybe this punishment isn't so great, because most of these men would probably consider that to be heaven.