The future of oil 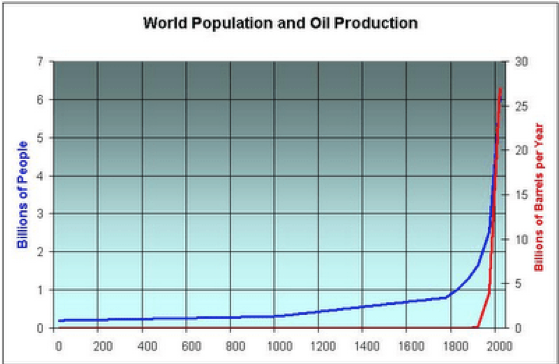 The future of oil is no great mystery, unless you listen to the western Major Media. The modern world would not survive without oil. Stop all oil production today and within five years, 80-90% of the world's population will be dead. These Population vs. Oil Production charts tell the tale. The blue line is population of the World and the red line is production of oil.

We have been producing oil since the mid-1800s. From 1900 to 2017 the life expectancy has almost doubled. Infant mortality is far lower. People today survive injuries, infections and diseases that killed healthy people all through history, until we unlocked the thousands of beneficial chemicals in oil, coal and gas. More food is produced due to pesticides, herbicides and other petro-chemicals. Livestock lives longer and healthier. Many lifesaving medicines come from oil.

Modern homes, automobiles, telephones, television, radio, computers and most of what the modern World uses, can only be invented, produced and distributed to the people because of oil. One single freighter ship today carries more goods that 100 ships could carry 200 years ago and gets to its destination in days or weeks compared to months in the 19th century and before. Today's ships are less vulnerable to storms at sea and require less time-consuming maintenance. Airplanes and helicopters can carry goods to their destination in hours instead of days or weeks and perform lifesaving rescues in all manner of extreme conditions in remote areas, much faster than getting there by foot or by boat.

Tell the environmentalists and anybody else who gripes about oil to live completely oil product free for three years and then come back and complain. Send them into the wilderness with no clothes and no tools. 95% of them will not live that three years to come back. The other 5% will probably quit whining, if they don't become babbling idiots full of parasites and diseases.

Some energy can be produced by wind, solar and water, but it is incredibly expensive and uses more oil to produce the parts and install it than it does to just use oil. The only somewhat reliable source for energy, besides oil, is water being held back by dams that could not be created without oil. And they cannot be maintained without machines and tools created by oil.

Since oil was first produced, we have gone through boom and bust cycles, but never a complete shutdown. The News is constantly hyping one great fear after another and life goes on, because oil goes on. The three necessities of civilization today are food, water and oil.

What about "Peak Oil", the idea that we are running out of oil? Don't be naïve. That con has been around since the late 1800's when Standard Oil Company's creator, John D. Rockefeller was telling people that after the oil in Ohio is gone, there is no more. He was lying his butt off.

From a report of Russian energy giant Gazprom:

"History of Oil in Russia:  1876 saw the start of commercial production on the Cheleken peninsula in present-day Turkmenistan. The rapid development of oil production was accompanied by the construction of various plants for processing crude oi, with a lubricants plant opening in 1879 near Yaroslavl and a similar facility opening the same year in Nizhny Novgorod. Oil production suffered as a result of the Russian revolution in 1917, and the situation worsened with nationalization of the oil fields by the Communists in 1920. The [Nobles] sold a significant part of the Russian holdings to Standard Oil of New Jersey, which was later to become Exxon. Standard Oil protested the decision to nationalize the oil fields and refused to cooperate with the new Soviet government. But other companies, including Vacuum and Standard Oil of New York, which was later to become Mobil, invested in Russia. The continued inflow of Western funds helped Russian oil production to recover, and by 1923 oil exports had climbed back to their pre-revolutionary levels."

The only con that may be bigger than "Peak Oil" is "Global Warming".

Most wars of the 20th and 21st centuries were and are, because of oil or gas. You only need to look at Syria, Iraq and Libya today and Vietnam 60 years ago. In World War II, the Desert Fox, the brilliant German General Erwin Rommel, was not fighting in North Africa to capture a giant sand box. Today, we have Nord Stream 2, a new export gas pipeline running from Russia to Europe across the Baltic Sea. It is a major concern that America may use violence to prohibit this pipeline. Some say it may ignite another huge war.

America's current energy plan is "Energy Dominance". That means we will produce far more oil than we need and sell the rest. The State of Alaska alone, holds enough proven and recoverable oil, to fuel the USA for 200 years. America's new trillion dollar infrastructure plans will require enormous amounts of oil. The various companies returning to America, bringing billions of dollars with them, maybe trillions, are going to require enormous amounts of oil. Our oil and gas exports will create more of a demand for the USA to produce more oil. And, rebuilding the war torn areas of the World, will require what? Oil and the willpower to do it.

The World powers today are turning from a legacy of theft, by war and trade barriers, to a World of "Peace and Prosperity" through mutual cooperation. The "G7 minus 1" gangsters haven't quite caught on to that yet. The UK, Canada, France and Germany are all too busy destroying their own countries. If we all forget our differences and respect each other's unique and valuable cultures, we can achieve that World of peace and prosperity for all peoples. Some of the wealthy will get wealthier and many will become less wealthy as we get rid of the corruption, which is happening all around us now, each day. And that process will accelerate.

Most of the poor people will see vast improvements in their lives in the coming few years. The not so poor and middle classes will grow also and be in a better position to elevate the lives of the very poor. (That is our human nature, if it is not obstructed or prohibited.)

So, what is the future for Oil? The race is on.