Kim-Trump Summit: A step in the right direction?

Kim-Trump Summit: A step in the right direction? 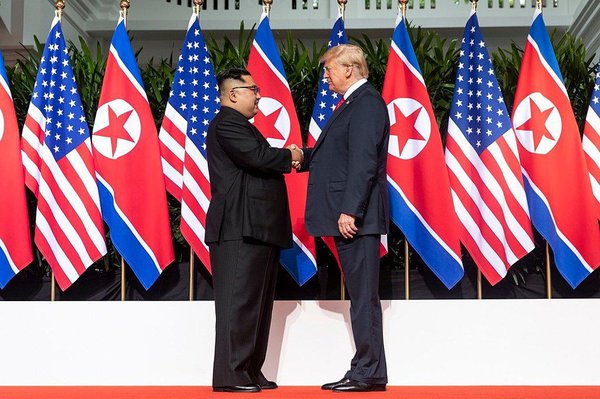 We will see whether the Kim-Trump deal will be a new beginning, or whether it will be verse two of the siren's song. Libya was verse one.

Recent history has taught us two things - that the United States of America and its sickening clique of yapping chihuahuas are serial warmongers - one look at the countries they have interfered in leaves no doubt; the second being that a Treaty, for Washington at least, is meaningless.

So whatever President Trump says to Leader Kim Jong-un's face, let time tell whether his platitudes are sincere or just another round of empty lies. One thing the USA and its yapping chihuahuas are good at - very good - is appearing credible and trustworthy, claiming the moral high ground and using the media to deride anything different as dark, dangerous and threatening.

But let us take a close look at their track record. Let us take the G7 as a shining example of political brilliance, and discover the wonderful paradisiacal world they have stitched together for us. Let us take the G7 as an example because these are the ones complaining and lying and provoking all the time, the G7 being the USA, Canada, France, UK, Germany, Italy and Japan.

The first G7 meeting took place in 1975. I began my travels in 1976. At that time, I could hitch-hike around most of Europe with the exception of Spain where nobody gave you a lift. You could travel around practically for free, relying on the goodwill of people.

You could travel by minibus across Europe, through Turkey, Iran, Afghanistan to Kabul; you could go hiking in the mountains of Pakistan; you could take the trip across North Africa from Cairo in Egypt to Casablanca in Morocco; you could wander around West Africa, through Mali, Mauretania, Western Sahara, Chad, Burkina Faso, Nigeria, Niger, Guinea, Guinea-Bissau, Senegal, where you would be welcomed by smiling villagers. You could do the Ceuta (Spain, in Northern Africa to Cape Town in South Africa trip by truck.

The notion of potential danger on any of these trips was precisely that: a distant notion of what might eventually happen but something that belonged to the what-if realm of potentialities, not realities. What you found were amazing people and peoples, memorable experiences, smiles, friendship and shared stories and cultures.

And since then? Under the enlightened dictatorship of the G7 and their yapping chihuahuas, delivered through the cutting-edge machinery of NATO and the EU, spearheaded by the FUKUS Axis (France-UK-US) and the ASS (Anglo-Saxon Syndicate), implementing the policies of the BARFFS (the $inister $ix $isters, or the Banking, Arms, eneRgy, Finance, Food, and drugS/Pharma lobbieS), what have we seen?

A systematic degrading of human rights across the world, to the point where today we do not even have the basic human right to travel around freely, unless to some plastic shithole of a tourist resort with fast food, marauding gangs of drunken youths kicking over trash cans and urinating in public.

The destinations mentioned above are downright dangerous, and instead of receiving a smile, you might get your head chopped off by some demented savage. Where religious freedom and tolerance used to exist, today Sunni and Shia are at each others' throats, Christians are gang-raped and decapitated. Workers' rights have been chipped away as the Magnificent Seven have masterminded boom and bust crisis economics, to the extent where the timetable has ceased to exist, salaries have frozen but commodities prices have risen, dramatically, having a job is considered a favor, so the worker is expected to work longer hours for less pay under threat of being thrown out at the slightest opportunity. Job security no longer exists; banks have stopped doling out loans for homes, so unless you have a substantial wad of money to use as a down payment, you can forget becoming a home owner. Rents meanwhile follow the rules of the market economy.

Commodities are rising monthly, people cannot afford to pay their energy bills, dental care has become so expensive it is out of reach for many and education follows the same rules as the high street. You want a degree? You have to pay for it. You want a good school? Go to the private sector. Nothing was done to prepare the younger generation for the digital revolution so these days they are stuck in a state of mechanical autism, unable to concentrate for more than three minutes unless they are surrounded by laptops, smartphones, tablets... with headphones blaring in their ears. They are desocialized for the classroom.

And now back to the Kim-Trump Summit. We have just seen where the Magnificent Seven have led us over the past half-century. Now let us see whether, after a Nuclear-Free Korean Peninsula, we can have a Nuclear Free Middle East. Ah right, sorry, Israel doesn't speak about its nuclear arsenal, not even the hundred-odd warheads allegedly stored in the Negev Desert.

For now, goodwill from the DPRK looking forward to peace and a conciliatory move from the USA to stop its provocative acts of insolence called war games, which are anyway only a prelude to the mass murder of civilians. Ask those who went to Afghan wedding parties.

If President Trump is good for his word, who knows what the future holds? My prediction is that there will be a period of grace, smiles and concessions. And then the subversion will begin and end when the Magnificent Seven have their colony established on the eastern border of the People's Republic of China.

So my message to Leader Kim: a courageous first step but watch your back. Invest in missile technology and anti-missile, anti-aircraft systems.