Several years ago, when I was in law school, a classmate and I were discussing topics from our Constitutional Law class.  When it came to the so-called "right to bear arms" (the second amendment), he passionately stated, "This right is an individual right, and nobody can restrict it or take it away!" 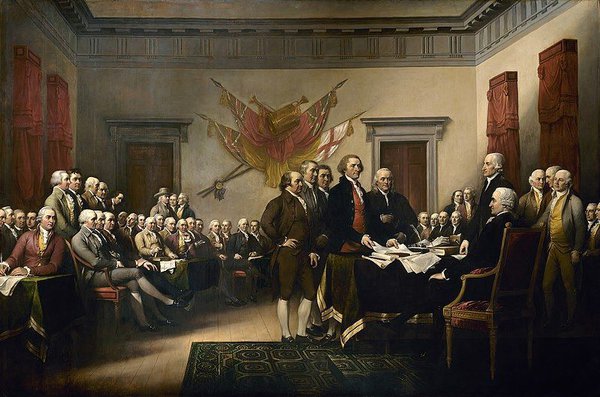 It just so happened that in the city where he was from, there was an ongoing effort to ban an adult publication, despite arguments from legal scholars that such a ban would violate the free speech clause (found in the first amendment).

When I asked him about that, he replied, "Well, if the majority of people don't want this publication, then the city should have the right to ban it."

To which I replied, "Well, what if the majority of people want to restrict or ban the sale and possession of firearms? Shouldn't the city then have the right to do that as well?"

This example is not being used to argue for or against the second amendment, but to illustrate the still lingering dichotomy often employed by those who interpret and/or rely on the Bill of Rights to support their arguments:  That the rights one strongly supports are so sacrosanct that neither the government nor the majority can restrict or take them away (absolutism), while the rights one doesn't as strongly support, or even opposes, can be subjected to exceptions, restrictions, or removal (relativism).

This tension between absolutism and relativism even affects individual freedoms, most notably the right to freedom of speech.  Supreme Court Justice Oliver Wendell Holmes once said that the principle behind the freedom of speech clause is to not just protect thoughts one agrees with but also thoughts one hates.

But in practice it is not so simple.

For example, the free speech clause only applies to the government, not the private sector.  This means that employers can (with some narrow exceptions) take punitive action against employees for their speech activities, even if they occur away from the workplace.

This is both a strength and weakness in America:  a strength because a business does not have to suffer a loss to its reputation and/or profits by being forced to retain an employee or client with unpopular beliefs; a weakness because this fear of being fired may impede employees from expressing things that need to be said.

The result is "free" speech in America is costly.  Speech that reaches large audiences is often controlled by advertisers and/or only practiced by people with access to media outlets and the financial security to withstand economic retaliation.

Three examples of this recently erupted in America: 1). The NFL ban on protests during the playing of the national anthem; 2).  Comedian Roseanne Barr's tweets about former Obama advisor Valerie Jarrett; 3). Comedian Samantha Bee's comments about one of Trump's daughters.

The result has been some vociferous debates about hypocrisy and double standards.  Many supporters of Colin Kaepernick, the now banished player who began the NFL protests to highlight racial injustice, probably felt a tinge of satisfaction that Barr's racially charged tweets resulted in the cancellation of her show.  Many supporters of Barr who believe her show's cancellation was an excessive penalty are now demanding Bee's show be cancelled.  Many people who claim offense at the term Bee used to describe Trump's daughter appear to conveniently ignore the fact that many Trump supporters, like right-wing blowhard Ted Nugent (who Trump invited to the White House), had used the same word to describe Hillary Clinton, and that Trump himself has frequently referred to women in derogatory terms.

The list could go on, but I believe these examples establish the point.

In response to this debate, one commentator argued that perhaps speech should be subjected to a "decency" standard, since "decent" speech usually carries well-thought out messages, while insults and spontaneous tweets do not.

Naturally, one problem with this is who will be the "decency" police to determine what types of speech add substance to the public discourse and what types do not.

Another problem is that so-called "decent" speech might not be powerful enough to accurately convey the threat a particular person or situation poses, or the depth of that person's evil.  History has shown, time and again, that sugarcoating the deeds of a tyrant (or a wannabe tyrant like Donald Trump) usually does not end well.

Speech must be free to recognize that far too many people who obtain power act and react from their basest instincts, and then develop rationalizations to make their words and/or actions palatable to the masses.

For example, Congressman Peter King recently stated (to a mysterious lack of public outcry) that allowing NFL players to protest racial injustice during the national anthem could segue into some of them giving Nazi salutes.

In addition to the fact King is a well-established idiot, his argument is ludicrous.  In fact, the anthem ban is more akin to Nazism than the protests themselves, because, if there was one thing Nazis did not tolerate, it was any dissent from their perverse brand of "patriotism."

In fact, when I think about the initial stages of Kaepernick's protest, the image that comes to mind is not of stormtroopers goose-stepping and saluting in unison.  It is that picture of August Landmesser, the one man in a sea of Nazis refusing to salute Hitler.

Before going further, allow me to state that I am not comparing people who choose to stand for America's national anthem to Nazis.  I am simply saying that Landmesser made a courageous decision to display his individuality during a time of compulsory groupthink, when such displays could easily be fatal.  What he did represented freedom, the very type of freedom the American flag is supposed to represent.

Hermann Goring once revealed that the true motivation behind compulsory patriotism was so it could camouflage the rise of myopic, obsequious, bellicose nationalism: "The people can always be brought to the bidding of the leaders.  That is easy.  All you have to do is tell them they are being attacked and denounce the pacifists for lack of patriotism and exposing the country to danger.  It works the same way in any country."

So when one hears Trump call NFL protesters "sons-of-bitches," when you see how easily he turned a protest against the institutional racism in America's legal system into an attack on the military and the country, and when he did this all, not because of any reverence for the flag or the national anthem, but for cheap political gain (as Trump told NFL owner Jerry Jones, criticism of the anthem protests was a "very winning, strong issue for [him]"), it raises disconcerting questions about the direction America is heading.

In fact, years ago, the American legal system, disturbed by Nazi images of intolerant nationalism and compulsory "patriotism," struck down laws that required children in public schools to salute the flag and recite the Pledge of Allegiance:  As Justice Jackson wrote in the case of West Virginia vs. Barnette, "If there is any fixed star in our constitutional constellation, it is that no official, high or petty, can prescribe what shall be orthodox in politics, nationalism, religion, or other matters of opinion, or force citizens to confess by word or act their faith therein. If there are any circumstances which permit an exception, they do not now occur to us."

Although Barnette only applies to governmental actions and actors, Trump's involvement in motivating the NFL ban may have actually transformed what appeared to be a private sector action into a government action, and by doing so made this ban a violation of the first amendment.

The "state actor" idea in constitutional law developed largely because people employed by the government, like police officers, were constrained by the protections of the United States Constitution.  For example, to search a home, a state actor required a warrant.  So, to get around this, police officers would sometimes have private citizens conduct the search.

The devastating impact of this was often evident during the civil rights struggles in the American South.  Police departments often acted in collusion with the Ku Klux Klan, and police officers were also often members of this group.  These departments and officers would often provide information to and incite private sector Klan members to attack civil rights workers, while not directly participating in such attacks themselves, thus avoiding any legal liability for civil rights violations.

This caused the law to change so that if state actors, through encouragement or threats, intermingle their activities with private citizens or organizations, then both can be exposed to legal liability for violating rights protected by the Constitution.

As Constitutional Law Professor Garrett Epps pointed out in an article for THE ATLANTIC, Trump has issued numerous demands to the NFL (such as to fire protesters), circulated threats against the tax breaks the NFL now enjoys, and has even taken credit for the NFL's refusal to hire Kaepernick-a claim now bolstered by evidence that numerous NFL teams consider Kaepernick talented enough to be a starting quarterback.

Columbia Law Professor Tim Wu adds this: "I'd say that when the president orders a private entity to censor someone, and they do, the state has acted in constitutional terms.  This is, to my mind, all about what happens when the White House commands or demands private censorship.  It has been a signature move of this administration-to order this or that private entity to fire someone for their speech, or begin [to] enforce the President's preferred speech rules, etc.  It is sort of outsourcing censorship, or censorship by proxy and I think it has begun to reach constitutional concern."

So, people of the United States, regardless of what you think about Bee, Barr, or Kaepernick and the national anthem protests, you should all be concerned that America is on the brink of tyranny and its most basic freedoms are under siege.  If you remain silent too long, you may no longer have the freedom to legally say anything about it.