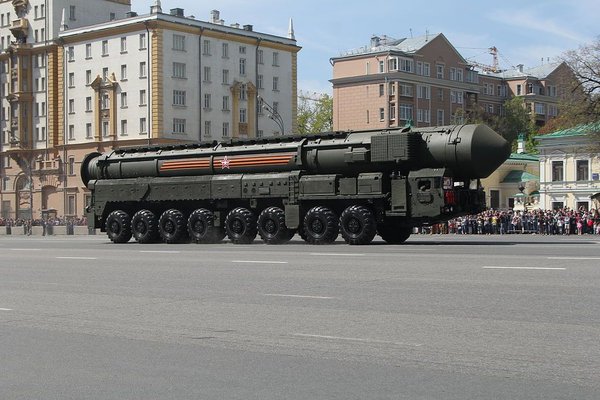 Russian President Vladimir Putin asserted in his annual speech, delivered on in Moscow, that his military has a new intercontinental cruise missile that is "Invincible." For the sake of argument, lets say that it really exists and that it is really unstoppable.

Throughout time, scientists have sought to achieve invincibility by applying ever-advancing technologies. History shows they have so far been unsuccessful. Adversaries inevitably devise methods to counter any system of offense or defense. Even President Putin admitted in his speech that if anyone found a workaround, "our boys will think of something new."

However, if President Putin, or for that matter President Trump, were to seek it, there is a solution to achieve unquestioned invincibility for their nation. The method comes from the union of social science and quantum unified field theory--not from approaches utilizing weaponry, and not from the field of politics.

President Putin could obtain invincibility for Russia if his armed forces were trained to form a Prevention Wing of the Military, comprised of Invincible Defense Technology experts. Field tested scientific studies show that large groups practicing the non-religious Transcendental Meditation® (TM) and the advanced TM-Sidhi® programs in a group twice a day generate a field effect that profoundly influences all within its vincinity. Militaries worldwide have field-tested this approach and are deploying it today.

The powerful, brain-based, Invincible Defense Technology (IDT) is aptly named. The word invincible means incapable of being defeated, unconquerable. Defense means to defend and to protect. Technology is applied scientific knowledge. The goal of IDT is to prevent enemies from arising. Once IDT is properly applied, Russia's military would become invincible because there would be no enemies to fight. No enemies means no war, no terrorism, no nuclear war and full security, as well as happy and productive lives for everyone.

In highly stressed areas of the globe, establishment of large groups of IDT experts have also increased growth of prosperity and economic incentives. Creativity and entrepreneurship increase as well. Also, on a global scale, when large groups of civilian experts gathered from 1983 to 1985, terrorism-related casualties decreased 72 percent and international conflict decreased 32 percent. These positive changes in social trends have taken place immediately after IDT was introduced. (For a research summary see: A New Role for the Military: Preventing Enemies from Arising-Reviving an Ancient Approach to Peace. Journal of Management & Social Science (JMSS), (Fall 2009), Vol. 5, No. 2., pp. 153-162.)

The IDT approach has been used during wartime, resulting in reduced fighting, reduced war deaths, and reduced casualties, as well as improved progress toward resolving the conflict through peaceful means. IDT is totally unlike any other defense approach in that it does not use violence in an attempt to quell violence.

High stress levels within any nation ultimately create enemies. If dangerous levels of collective stress are reduced by applying IDT, then leaders will be more capable of finding orderly and constructive solutions to irresolute issues that have kept them at odds for generations.

With greater civic calm, citizens' aspirations will rise, and a more productive, more balanced society will emerge. Then violence as a means for change and/or as an expression of discontent will naturally subside.

The Global Union of Scientists for Peace (GUSP) advocates the IDT approach. This non-profit organization hosted an international conference in Kiev, Ukraine last year (see: https://www.gusp.org/global-peace-summit/). Lt. General (Ret.) Vasyl Krutov, former chief of the Ukraine Anti-Terrorism Center was among the impressive list of participants who spoke at or voiced their support for the conference. Others included: President Joachim Chissano of Mozambique, who applied innovative IDT programs to end that nation's civil war; retired Ecuadorian Lt. General José Villamil, who also applied IDT to end war between Ecuador and Peru; and Mr. Mohd Khalid Naseemi, the founder and Director-General of the Afghanistan Environmental Society.

IDT is a proven way for Russia's military to protect itself and to gain global respect by deploying a simple, low cost, defense system, with minimal training needed to implement it. So far, no nation has found a way to work around it. Once an enemy becomes a friend, there is no need to fight. Differences can be settled through peaceful diplomacy.

Recent events worldwide show that IDT is desperately needed. It works quickly, and there is no better solution to prevent nuclear war. President Putin would be wise to immediately implement the program, thereby turning his enemies into allies, and creating lasting peace.

Dr. David Leffler has a Ph.D. in Consciousness-Based Military Defense and has served as an Associate of the Proteus Management Group at the Center for Strategic Leadership, US Army War College. Currently, he serves as the Executive Director at the Center for Advanced Military Science (CAMS) and lectures and writes worldwide about Invincible Defense Technology. Dr. Leffler's provocative editorial "Creating an Invincible Military" was published in Real Clear Defense, featured in Fox News and reprinted in United States Air Force Center for Unconventional Weapons Studies (CUWS) Outreach Journal," Issue No. 1274. He is available on Twitterand Facebook.