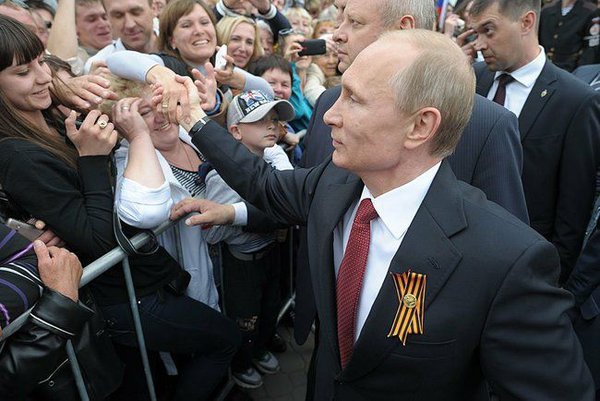 As predicted, Vladimir Putin was re-ected for the next six years with around 76 per cent of the vote, followed by the Leader of the Opposition, the Leader of the second most-voted party, Grudinin, of the Communist Party, with about 12 per cent. With 88 per cent of the votes accounted for by the two major parties, followed by Zhirinovsky's 5.6 per cent for the Liberal Democratic Party, we are well into the ninety percent range, so why this insistence in the West to talk about Navalny being the leader of the opposition? He was excluded for malpractice and even if he had run, what percentage of the vote would he have gained? He would have lost his deposit.

So first off, many congratulations President Putin on your victory, which matters in Russia, to Russians, for your policies are Russian solutions for Russian questions, Russian policies by Russians and for Russians. And it matters to the rest of the world for all the best reasons.

Secondly, why did Russians vote for Putin, and why do Russians vote for Putin? Those in the West, and especially in the Western Press, which call the Russian government a "regime", or a "dictatorship" run by a "dictator" are basically calling the 56 million-plus Russians who voted for him stupid, which is an insult to Russia and to the Russian people. The election process in this vast country went smoothly despite alleged hacking attempts by foreign agents (so much for Russian interference in foreign elections), despite Western claims of "vote rigging", as predictable as they are ridiculous.

People did not vote for Putin because he is a dictator (what dictator wins a democratic election?) or because the vote was rigged. They voted for Putin because since he has taken office, he has paid off the debt of the Soviet Union, he saved Russia from disintegrating under pressure from the West financing and aiding separatist movements trying to carve off Russia's resources for foreign interests, he stabilized the situation in Chechnya, he has increased the presence and importance of Russia as a world player.

In 2008, under instigation from the West, Georgia launched a murderous attack against South Ossetia and planned another against Abkhazia. The Spetznaz finished it. Within hours. Putin's Russia spoke out against the illegal Iraq invasion and was right - it was one of the worst Western policy disasters in History. Rather than cavort with terrorists, as the West did in Libya and then Syria, arming and aiding savages who sliced the breasts off nuns, raped little girls before and after beheading them and then played soccer with their heads, Putin's Russia conducted a succesful anti-terrorist operation, helping the Syrian people fight off the scourge of Western interference. And when the West launched its hideous attack in Ukraine, ousting the democratically elected President , Viktor Yanukovich, and overseeing a "demonstration" in Kiev in which agents were firing at both sides to start a "revolution", to blame the security forces for firing at "protesters", Russia acted with maturity, waited for the people of Crimea to deliver their verdict on rejoining the Motherland and today millions of Crimeans are receiving Russian pensions and not miserable pittances thrown at them by Kiev. And NATO lost the chance to get Russia's Navy bases.

Putin stands for Russia, for stability; Putin is trusted and admired, not feared. That is why Russians voted for him and that is why he won seventy-six per cent of the vote.

The very fact that he was elected by so many in a relatively high election turnout (just below 70 per cent) is significant. For Russia it means a continuation of his successful domestic policies. For the rest of the world, it means a development of the current geo-political situation in line with the needs of the day.

Since the very beginning it has become apparent that with the West, there needs to be two blocs, because since day #1 all they have done is encroach upon Russia, starting with their murderous involvement in the Civil War and after World War Two, when Russia and the Soviet Union gave up 26 million souls defeating the same sort of Fascist tyranny we have seen recently resurge in Ukraine and other Eastern European countries, through continued assassination attempts against Russians and Moscow's allies, aiding Fascist dictatorships, and trillions of dollars spent on sabotage and terrorist attacks.

Russia's attempts to engage with the West in a friendly manner have only met with ridicule and scorn; first they promised that if the Warsaw Pact was dissolved NATO would not encroach eastwards then when Russia complained they said it is none of Russia's business. And since then they have constantly launched provocations as listed above and then complain that Russia was the instigator. They are constantly blaming Russia for things which either have no explanation, or else do not have a clear explanation, the latest being the ridiculous allegations, or accusations, by the British government that the Kremlin was behind the attempted murder of citizens living in the UK (Sergei and Yuliya Skripal, and by association a British policeman). Why would the Kremlin order an attack on the eve of the election and before FIFA? And as regards the allegations by British Foreign Secretary Boris Johnson that the UK has "evidence" that Russia is stockpiling chemical weapons, show it now, or else STFU. We saw "your" "evidence" on Iraq - lies and worse, forgeries. Yes, forged documents trying to link Saddam Hussein to yellowcake Uranium.

The forthcoming tests on the chemical materials will show us, hopefully without any skulduggery, exactly what happened and will exonerate the Kremlin, if the truth is not covered up. Strange that it will take the experts two weeks to deliberate and reach a conclusion but the British government without any testing at all concluded that the Kremlin was involved, within minutes.

So we see the international climate as it is today. Once again, a hysterically and historically Russophobic West. So the way to halt a flood is to build a dam, or a dyke as the Dutch have done in the Netherlands. In geo-political terms, it is to build a bloc based upon credibility, meaning internal support and it means basing policy upon  strength, meaning clout. It entails creating a bloc with the dialogue "You will not meddle in our affairs" and it involves drawing red lines, as Moscow did in Syria.

The result will be continued false flag operations by the West, launching chemical weapons attacks in Syria using chemical weapons ferried there from jets freighted from neighbouring countries or those in the region, or which have been supplied to Western-backed terrorists to use and then blame President Assad, as a precursor to the West getting further involved in Syria to help their terrorists which today are being pushed back on all fronts by the Syrian Arab Army, heroically and patriotically fighting for their country and their people.

But these provocations will come up against a wall of steel. On the other side, a socially-leaning bloc will see its roots grow deeper. This bloc follows international law and does not flout it (after Iraq who believes a word the UK or USA say and after the "350 million pounds a week for the NHS after Brexit"  who believes British Foreign Secretary Boris Johnson?). This bloc forms alliances fostering development, friendship, business and cultural cooperation projects among the BRICS (Brazil, Russia, India, China, South Africa) and others who will inevitably join (credibility), and the CSTO (Collective Security Treaty Organization) (strength).

Eventually, political players will appear in the west supported by a population that does not believe the lies their media peddle as the truth, who want a world based on embracing friends and not fostering hatred and who are sick and tired of the military-industrial complex perpetuating its existence through arms contracts because selling weapons to murder people is "good for the economy" and investing in healthcare to save lives is a burden.

So when this present clique of warmongers, charlatans and shitfaced liars cease to infest Western Parliaments and Houses of Representatives, when the media starts to tell the truth and not stir up hatred and division, maybe the two blocs can come together as one and maybe then we can all start to solve the tremendous problems these internal divisions and conflicts have caused for this ailing planet.

Vladimir Putin, the environmentalist, very much at home riding through the Siberian countryside tagging tigers and bears, is a fundamental part of this counter-weight to the evils inherent in the Western system, basically a front for the BARFFS (Banking, Arms, eneRgy, Finance, Food, PharlaceuticalS lobbies) which dictate western policies. These are not representatives of the people, they pull the strings of those the people elect. Sooner or later, the People will see the Light.

So for this, the election of Vladimir Putin is more than a victory for the Russian people, it is a victory for the free thinking citizens of the world who believe that this planet and its resources are OURS, not THEIRS.