Turks and Greeks are two people that lived side by side on the same lands for centuries; they mixed, bonded ad were tied to each other with many historical and cultural bonds. The natural outcome of this long co-existence should have been a close bond, fraternity and friendship, which is the case in many similar examples around the world. However, things have usually been the opposite for these countries. 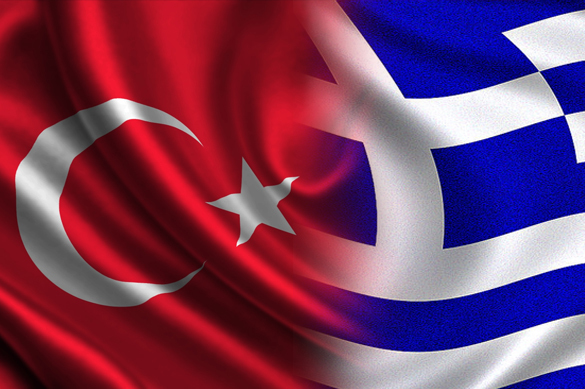 A deeper analysis reveals that the reasons behind this strange outcome have been certain circles that didn't consider the development of this friendship and alliance fit for their interests and plans. It is now a familiar habit for the said circles to step in and replay disastrous scenarios whenever an opportunity for Turkish-Greek friendship rises. The same circles have long taken every opportunity to sow the seeds of discord between the two countries, and to this end, have fueled artificial crises and conflicts, and even managed to bring the two countries to the brink of war for completely irrational and insignificant reasons.

During WWI, the plots of these secretive structures against the two countries became more prominent because they believed a Turkish-Greek alliance dangerous for their plans of domination and exploitation in the Middle East. Furthermore, continuation of the caliphate, a title preserved by the Ottoman Empire, didn't sit well with Britain, which had been making plans of dominance over the Middle East and the Islamic countries, as well as their natural resources and oil reserves.

As soon as WWI came to an end, Britain occupied Istanbul. However it didn't start a direct fight against the Ottomans and did not personally extend the occupation to Anatolia. Instead it used proxies because it was well aware that such an occupation would come with physical and moral costs. While distributing parts of Anatolia between the French, Italians and Armenians, Britain used Greece to to occupy Western Anatolia by making various promises.

At that time, Greece trusted British promises of support and invaded Izmir upon British coaxing. It even moved further into Aydin and Bursa. However, it never got the support it needed from the British. Instead, it was left alone without any proper resources to face the Ottoman army, which has been fighting overseas for the past 20 years. Inevitably, Greeks sustained heavy losses and had to retreat from Turkish lands they occupied after suffering a major defeat.

This wasn't the only time Greece was double crossed by Britain. In the Lausanne Treaty negotiations that followed the culmination of the Turkish Independence War, Britain was among the victors, but Greece, despite being an ally of Britain, was placed among the losers. Indeed, then-Greek Prime Minister Venizelos couldn't contain his surprise at this turn of the events and asked, "Why is Britain sitting among the victors, while I am with the losers despite being a British ally?.." Venizelos, without meaning to, was in fact summarizing the inevitable end of all those that trusted the British deep state's friendship and its empty promises throughout history.

Since then, the same deep and colonialist power, openly or secretly, maintained its policy of creating discord between the two countries. In the occupation of Ottoman lands after the WWI, the main driving force was no doubt Britain. Greece was one of the countries that were dragged into the conflict for the purpose of serving British interests.

Strangely, following Turkey's successful liberation from occupation and the foundation of the new Turkish state, an imaginary scenario was built where Britain was made to look like Turkey's good friend, and Greece as the arch -nemesis. This ugly scenario was supported with quite elaborate propaganda and provocation techniques as well as disinformation and gradually drove a wedge between the two countries. Turkey and Greece were not allowed to develop friendship, alliance and cooperation, which would certainly benefit both countries. Through various pretenses, this alliance, which could easily help build peace, stability and welfare in the region, was prevented from coming to fruition.

The Kardak crisis, which causes tension between two countries from time to time, is one of those artificial reasons used to prevent Turkish-Greek friendship. It first broke out when a Turkish ship ran ashore in the Kardak islets in 1996 in Aegean Sea. The crisis escalated after a dispute between the Greek and Turkish rescue crews and the countries were brought to the brink of war. However, the USA and NATO stepped in and helped solve the crisis.

22 years later, tensions once again flared on January 28, 2018 between Turkey and Greece due to the  Kardak islets. The Turkish Coast Guard prevented the Greek Defense Minister Kammenos' attempt to approach Kardak with a gunboat to throw a wreath into the island. After the warning, the Greek delegation left Turkish waters before the crisis escalated any further.

Clearly, even small islets can be used to pit two armies against each other and for warmongers to start war cries. It is obvious that neither Turkey nor Greece will gain anything from renewal of such artificial crises. On the contrary, it is clear that putting these two countries in danger by encouraging such a crisis will do nothing other than hurt them. Once again, the only party that will benefit from the resulting crisis will be the  secretive structures that consider an alliance in the region unfit for their purposes.

The same plots were also concocted  against the Turkish-Russia alliance. However, the sensible approach of both leaders managed to thwart the plot and even achieve the opposite results.

It is crucial that both Turkey and Greece act with prudence and common sense to foil these plots and be wary of provocative circles. Identifying and dismissing such agent provocateurs that have infiltrated the administration, bureaucracy and the media in both countries will be an important first step.

It is also very important that both countries maintain mutually respectful, well-intentioned, reasonable policies to counter provocations intended to stop Turkish-Greece friendship and alliance. In this context, President Erdogan's visit to Greece in 2017, which was the first presidential visit in 65 years, can be considered a very positive start for further improvement of relations.  Alliance, friendship and cooperation agreements in various areas will no doubt be a strong precaution against plots intended to turn the two countries against each other. It is of crucial importance that the countries ignore the provocations of certain interest groups and focus on rapprochement instead. The two countries are very similar to each other with their friendships, traditions, customs and life styles. For centuries they co-existed and they still do. Falling apart at times when friendship is required the most will do nothing but cause great harm to both countries and the region in general. Especially at times like this , when wars and economic crises abound in the world, it is vital to turn the negative into the positive and revive the 500-year-old friendship.