One step closer to a resolution in Syria

The recent participation and involvement of regional countries in the solution process is an important milestone in the path towards a final resolution in the Syrian crisis. Furthermore, the visible change in the attitude of the parties involved also raises hopes for an approaching peace. For instance, groups that would not even discuss the thought of sitting at the same table until two years ago came together at Sochi. Indeed, there have been heated debates and exchanges, but it was clear that all the parties involved were willing to find some middle ground. After the mostly failed Geneva talks, the Astana and Sochi talks made up for lost time and managed to bring the parties one step closer to the solution. 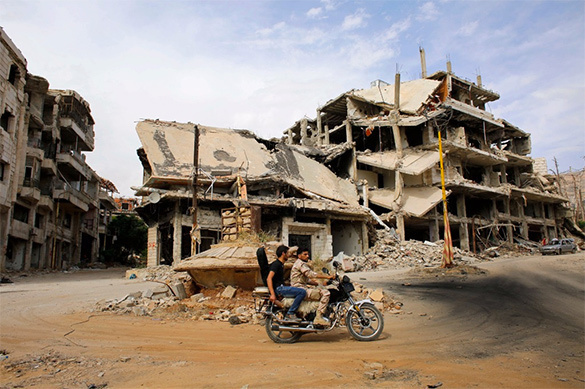 However, certain circles who have always been skeptical about the Sochi efforts, seem to be happy that the talks started on a tense note and especially after certain opposition groups left the talks due to a flag crisis. However, this certainly does not mean that the talks will fail because the opposition groups that refused to enter the country in protest against the pictures and flags of the Assad regime asked Turkey to represent them and also requested Turkey deal with the process of building the anticipated Constitutional Committee. This is an important step in terms of the continuance of the resolution talks. It is clear that meetings between the quarreling parties do not produce any results. For this reason, negotiations held between Russia and Turkey, which represent the Syrian regime and a part of the opposition respectively, are more likely to achieve fruitful results. Russia and Turkey are two countries that understand and appreciate the importance of friendship and alliance. Therefore, negotiations held under their auspices have a higher likelihood of success.

According to the reports, more than 1,500 delegates attended the congress to which Syrian government authorities, as well as the representatives of ethnic and religious opposition groups, with the exception of terrorist groups, were invited.

To everyone's surprise, the conference ended with belligerent parties meeting on a common ground. Once again, it was Turkey and Russia's involvement that made the final joint statement possible, which is crucial for a real solution in the Syrian crisis.

The final statement is perhaps one of the most important steps ever taken with regards to the Syrian problem. The statement read: "To that end we agreed to form a constitutional committee comprising the Government of the Syrian Arab Republic delegation along with wide-represented opposition delegation for drafting of a constitutional reform as a contribution to the political settlement under the UN auspices in accordance with Security Council Resolution 2254." It also said that the Constitutional Committee would include the regime, the opposition, Syrian experts, independents, tribal leaders and women. It was agreed that women should have a representation of at least 30% in the government and government agencies and that the level should be increased to 50% after a certain amount of time. It was also stated that the UN-led Geneva process would see the final agreement on the mandate and terms of reference, powers, rules of procedure and selection criteria for the composition of the Constitutional Committee. The statement ended with a call to the United Nations Secretary-General to assign the Special Envoy for Syria for the assistance of the Constitutional Committee work in Geneva.

The fact that UN representatives and European allies were invited to the talks showed that the parties were in search of a genuinely global, not regional, solution to the Syrian problem. Even though Britain and France may not seem very happy with this crucial achievement, where Russia is the main player in association with Turkey and Iran, the West's ambitions to protect Western interests weren't taken into account in Sochi. Russian Foreign Minister Sergey Lavrov said after the meeting that they informed the UN of the outcome, hoping that it would revitalize the Geneva process, and that the UN would achieve results in line with the decisions made in Sochi. All these steps clearly show that unlike certain Western allies, Russia is not trying to be in the spotlight and is not selfishly pursuing its own interests. It is clear that Russia and the countries of the region are sincerely working to build peace in Syria.

One of the most important parts of Sochi final statement was the determined stance about the preservation of Syria's integrity. Some highlights from the statement are below:

¨A strong, unified, meritocratic and national army that carries out its duties in accordance with the constitution and the highest standards [is required]. Its functions are to protect the national boundaries and the people from external threats and terrorism, with intelligence and security institutions to maintain national security subject to the rule of law, acting according to the constitution and the law and respecting human rights. ... equal citizenship irrespective of religion, ethnicity and gender...  The Syrian people alone shall determine the future of their country by democratic means, through the ballot box.¨

'Protecting the national boundaries' and 'equal citizenship irrespective of religion, ethnicity and gender' are no doubt crucial for the future of Syria. These phrases show that cantons or federal structures in the country will not be allowed and terror groups that seek to capitalize on differences in religion and ethnicity will not be given leeway.

President Putin's remarks about the congress presenting an opportunity for Syria to return to a peaceful, normal life were important. Referring to the clashes that have been going on since 2011, Putin said that conditions to close this tragic page of history have now emerged. Indeed, it is very important that guarantor countries stepped in and reached an agreement on the main principles regarding a constitution, which marks an important step in the resolution process of the Syrian crisis.  There is no doubt that the alliance of three friendly allies played a crucial role in this achievement. The three friendly countries, Russia, Turkey and Iran, represented different sides and showed that it was possible to find a middle ground.

Turkey's Afrin operation, carried out in coordination with Russia, was a show of determination in defiance of the West and particularly the USA. Necessary and justified steps taken with regards to the region and the alliance of NATO-member Turkey with Russia has shown certain groups that it was not the West that made all the decisions.

The Sochi talks and the resulting steps showed to the world that Russia was the main player when it came to Syria. It is clear that Russia's steps, made after consultation and agreement with Turkey, involves a solution that also embraces the opposition. This week, Turkish Foreign Minister Mevlüt Çavuşoğlu had once face-to-face and six phone conversations with his Russian peer Sergey Lavrov. This intense dialogue is due to the desire of these two allies to build the most positive and healthy peace process in Syria.

We hope that a constitution where all the groups of Syrian society are represented can be quickly created and country can be rebuilt after being completely purged off terrorist groups. This is going to be an achievement made possible by means of an alliance of regional countries built for the salvation of the Syrian people. Such an outcome will also quiet those circles that are keen on controlling everyone and prove wrong those who insist that 'it is good to be divided'.