I found this article on the blog "Goofynomics" by Alberto Bagnai, a well-known Italian professor of economics who has always been hostile to the Euro, to the Troika, to Brussels for a set of reasons with which I personally agree. 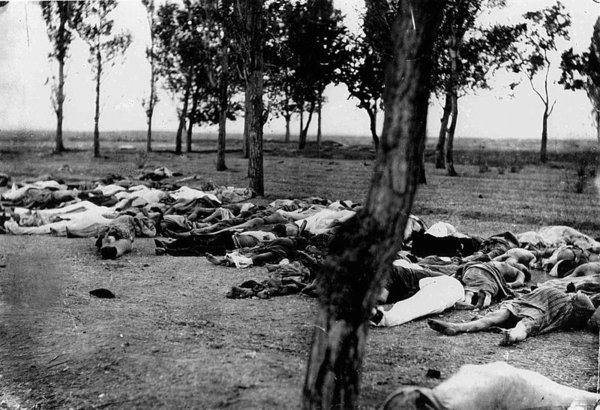 Bagnai published a letter from a reader of his blog, a letter already translated into English for the convenience of international readers.

It speaks about Greece, economic crisis, cultural genocide. The Greek readers will find it tragically interesting, but even the Italian ones should, being Italy next on the list.

This letter clarifies all too well, if it were still needed, the real nature of our modern Europe and to which "principles" it inspires itself.

I am John Smith, a lawyer from WAKDJUHLK. This is the first time I write to you and I swear to Beelzebub not to do it again. I do not wish to discuss economics, numbers and graphs; I lack the preparation. I just want to share what happened to me last night in a pizzeria.

I am at a table with friends of my girl friend, whom I do not know well. A fellow sitting next to me tells me that he lives in Athens and works for the European Commission. His working group is helping the Greek government apply the agenda of the Troika (don't worry prof, I am not going to recount the economic "reasons" that I had to hear, you know them better than I).

I was dismayed to learn that the operation is much more sophisticated and ideologically complex than the political-economic version. By the way, I have bonds with Greece and consider it my second home. I know it quite well, and whenever I can, I return to see various friends. At home I grew up on epos and Hellenism and I did classical studies.

To return to my story: the substance of what I heard was that the Greeks do not have the right to complain. To the contrary, they should thank the west (a concept I hate, but that I report) for its very existence. Greece, the Greek nation, is in fact a geopolitical invention, artfully created in 1800 by France and England to favour implosion of the Ottoman empire. "Greece was the Israel of the 19th century" [cit.]. My zealous neighbour did not say that France and England were content just to sustain the Greek revolts against the Turks, but claimed that the Greek people do not exist. The Greeks are only Orthodox Turks! Modern Greek was forged ad hoc to give them a sense of community. Greece was created as a buffer state to arrest Muslim expansion. A military outpost full of people who just happened to have the same religion: "exactly like the state of Israel" (addendum: for brevity and coherence I shall not go into what the state of Israel is or is not).

I tried to bring my stubborn dining companion back to earth, starting with linear B of the Mycenaean period, the Persian wars, Hellenism and the Byzantine empire, down to the war between Greece and Turkey and the mass deportations of Greeks from Anatolia in the early 1900s [ https://en.wikipedia.org/wiki/Greek_genocide ]. To no effect.

For him my arguments were sophisms because the history of the Mediterranean and the mobility of the populations that lived and sailed it for thousands of years make it impossible to identify the starting points in history of peoples and nations.

On the basis of "The Baltic Origins of Homer's Epic Tales"

(a wonderful book by Felice Vinci), I conceded that the "blond Achaeans" of the Iliad could indeed have originated from Scandinavian populations that descended the Vistola and Danube in ancient times (a hypothesis to take with a grain of salt), but that from that moment the Greeks had always been there. Nothing. The Greeks do not exist, they are an artifice.

In the end, disconsolate and exhausted by the effort to remain polite, I gave up.

But I learned something.

The narrative of power is attempting a noteworthy qualitative leap. It is no long denigrating the nation state with the story of lazy, unproductive, corrupt and wasteful Greeks. It is trying to cancel three thousand years of history with the rhetoric of the ipse dixit of "experts". The subjects in question (and their zealous young recruits like my dining companion) are not just sharks and mystifiers, but much worse: manipulators of history, geography, anthropology, philology and the like.

Denying the origins of a people, its history, traditions and ethnic-linguistic homogeneity (ignoring dialects) means denying the existence of that people. And where there is no people, where there is no dèmos, there cannot be democracy, but only despotism and barbarity.

In conclusion, if it is possible to manipulate Greek history, one of the oldest in Europe, with such facile impunity, then it is even easier to manipulate the history of much younger and more heterogeneous nations like Italy.

We should watch out for this because as you say, we are next.

I trust I have not abused your patience. Thank you for your attention and your time.

All the best for your work.

P.S. If you decide to publish this, please do not disclose my name.

(...I kindly advise the interested reader to have a look at the Cultural genocide [ https://en.wikipedia.org/wiki/Cultural_genocide ] entry in Wikipedia. By the way: welcome to Europe!...)