And the next stop, ladies and gentlemen, in the Middle Eastern power ride, after Iraq and Syria, is Iran. How predictable. So before the western propaganda machine gets its cogs turning, let us see exactly what this story is about and let us try to find the truth. What is happening in Iran and why? Er... nothing much... read on!! 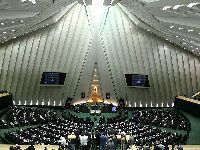 What the story is not about, ladies and gentlemen, is Iranians rising up against their government asking the West to come in and support them and perform a spectacular regime change using terrorists as they did in Libya and Syria, both bearing the hallmarks of western intrusion.

True, there is some unrest in Iran, like everywhere else,  not because of oppressive governance but because there is a high youth unemployment rate (around 20 per cent in real terms), as there is elsewhere, and the inflation rate remains high, although it has fallen to ten per cent. This comes on the anniversary of the removal of sanctions which gave rise to the hope that the economy would get moving sooner.... for some members of the population. A few, actually.

Charges of corruption have not helped provide the notion that this potentially rich country is doing everything it can to allow the wealth to filter down to the grass roots. For a few.  The "unrest" appears to have started in different locations among those not necessarily connected to any political movement and appears to be economically motivated, the focus being among the youth - over half the population is aged 35 or under. "Appears to be".  According to western sources, of course.

From my studies, that is as close as it gets to a nutshell, although the comments section is open below this article for others to refute what I say.

So, what happens next? The sensible path would be for the international community to take stock of what is happening in Iran and why, and do what it can to enable the government to restore order and deal with the grievances. Among the few thousand people taking to the streets in a population of some 80 million. And the international community must do this from an unobtrusive stance, helping but not meddling, nurturing but not interfering. In short, respecting the Iranian people by enabling Iranians to find solutions for Iranians, by Iranians.

The senseless path, which is one the West has chosen time and again, is to interfere, fanning the flames of extremism, using terrorists and terrorism as their tools, dividing societies, causing misery, violence and chaos, which engenders a crackdown, during which unidentified snipers, often foreigners, fire on both sides to create chains of reactions and martyrs and wow! we have a color revolution. Based on a fraction of the population creating chaos, probably paid by foreign sources, but not representing the Iranian People, with a capital P.

This path does not respect Iran or Iranians; Iranian society is a complex one which has seen numerous ethnic groups practising numerous religions, speaking seventeen different recognized semi-official or official languages co-existing in harmony, a society which has existed more or less as a unitary bloc since 700 BCE and these people do not need anyone or anything to teach them how to live together.

And which path shall we see? Suffice it to say, look at the book of western geo-political strategy since 1991 and read the chapters entitled Balkans, Iraq, Libya and Syria. Read the lines where the USA and its chihuahuas in Europe and the MidEast took direct measures to topple governments, successfully in Libya, if a destroyed state crawling with terrorists can be called a success, a sniveling failure in Syria, the first stepping stone to Iran, into which theater Teheran was drawn in, to make sure the war did not come to its own borders.

The Syrian project failed, the next move was and appears to be, direct interference. The leaked memo among Trump aides in December of 2017 stated just that, namely that human rights would again be at the forefront of Washington's policy. So flick through the pages to the future and do not be surprised to see "martyrs" being created in Iran, as a prelude to another attempted color revolution.

Do not be surprised to see this policy of intrusion tried and repeated once again in the Russian Presidential election, in March and watch this space as they try to prize the FIFA World Cup Finals away from Russia and give it to Chief Yapping Chihuahua, the United Kingdom.