Tillerson: The Ice-Cream Devil dancing on a hot tin roof

Tillerson: The Devil dancing on a hot tin roof 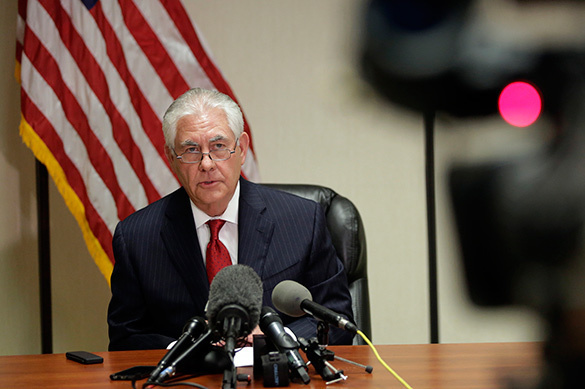 Rex Tillerson, the US Secretary of State, declared in an op-ed article in the New York Times this week that he is, and I quote, "Proud of (US) diplomacy". The analogy that springs to mind is that of a father defending his demented son who has just murdered a family of six but left one sitting in a wheelchair because he ran out of bullets.

Rex Tillerson, the US Secretary of State, declared in an opinion-editorial article in the New York Times this week that he is, and I quote, "Proud of (US) diplomacy". The analogy that springs to mind is that of a father defending his demented son who has just murdered a family of six but left a grandmother sitting in a wheelchair because he ran out of bullets.

So when Rex Tillerson, United States Secretary of State, the leader of his country's diplomacy, makes his statement about how proud he is of his country's diplomacy, after Washington insulted the international community with the insolence of Colin Powell with his lies, Condoleezza Rice with her insults, Hillary Clinton with her utter incompetence (Libya) and John Kerry with his rudeness, we have the right to stand back and take stock.

And let us take stock on his statement in the same week that the Ambassador of the United States of America to the United Nations Organization, Nimrata Ramdhawa, alias Nikki Haley, fell for a prank by two Russian comedians about Russia interfering in the non-existent elections in the non-existent state of Binomo, admitting that the USA was aware of and following the case.

Proud of a Rottweiler ripping the throat out of a child

So Rex Tillerson is proud of his country's diplomacy over the last year. So Rex Tillerson is proud of the fact that his President, Trump, launched missiles at a Syrian military base murdering Syrian military personnel and others working on the base just because someone said the Syrian authorities had launched a chemical weapons attack on terrorists, without a shred of evidence. Perhaps Tillerson would have applauded if the terrorists had won. The Syrians were fighting ISIS. And he is proud of the fact that the USA attacked those fighting ISIS? Is he daft, stupid or what?

And so how can Rex Tillerson be taken seriously when he puts terrorism, Russia and China into the same breath? And so how can Tillerson he taken seriously when he says that Trump abandoned the policy of "strategic patience"? Patience? Does that include sending Libya, the country with the highest Human Development Index in Africa, back to the dark ages, crawling with terrorists? Is Tillerson proud of that? And if he says that was the work of the previous "regime", then what has he said to counter the negative effects of US diplomacy over the past decade?

And so how can Tillerson be taken seriously when he mentions that he is proud of "diplomacy" when "diplomacy" has been relegated to the back burner and bullying, blackmail and belligerence has been used over North Korea, Ukraine, Libya and Syria and countless other theaters? What diplomacy has Tillerson used, anywhere, anyplace, any time?

The United States of America is as arrogant, bullying and chauvinistic as it has ever been. Instead of diplomacy it used coercion, threats and negative insinuations, threatening countries which vote against its hegemonistic initiatives in international organisms, cutting aid, and allegedly telling those it has corrupted that their political (or otherwise) lives are over if they do not pull their weight for the cause.

Perhaps Rex Tillerson should shut up, do some more reading and become less pig-faced insolent before he dares to don the diplomatic cape of his country. But then again, look at who he is following, and look at the record of sheer insolence of the US ambassadors to the UNO in recent years, and we see that the more you scratch the veneer of US international politics, the worse the stink.

And Tillerson stinks. An oil tycoon lost in a pond of his own shitfaced insolence. The epitaph: One foul-mouthed guttersnipe.