Jerusalem should be the capital of love and friendship

After US President Trump revealed his decision to relocate the US Embassy in Israel to Jerusalem, heated discussions began in the region, which is already grappling with intertwined conflicts in Syria, Yemen and Iraq. Since the arguments and debates have mostly focused on the issue of whether or not making Jerusalem the 'capital', most observations and analysis ended up having a political nature. However, when it is Jerusalem that's in question, purely political or national-interest based approaches do nothing other than quickly cause a stalemate. 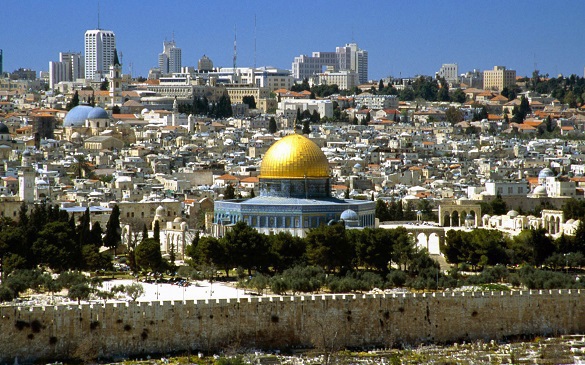 When it comes to Jerusalem, it is important to choose a different route, one that hasn't been tried so far. In order to clear this blocked path, it is important to move on from the tired political rhetoric, overused statements of the NGOs and human rights groups, and the completely ineffective and meaningless condemnations of the international organizations.

It is crucial that countries of the region, regardless of their religion, ethnicity or language, leave behind the concept of 'national interests' and unite around the principle of unconditional friendship and unconditional brotherhood on a secular, democratic and human-oriented basis. This should be done without having to resort to intermediaries that are strangers to the culture, faith, traditions, common heritage and lifestyles of people of the region, who have lived together for almost a millennium.

As people who have lived on these lands for at least one thousand years, we know each other. We are aware of each other's sensitivities. We have enough historical knowledge and culture to know that we do not need others to teach us how to live together. We can easily come together and build a platform where we can work out all our problems together through discussions. As a devout Muslim who lives by the morality of the Qur'an, I believe that this platform should be one of an alliance. Given the ethnic and religious nature of the Middle East, this should be an Islamic Union that incorporates all religions, cultures and ethnicities in a welcoming embrace; particularly, this Islamic Union should include the strong country Russia, the backbone of the region, which has made great contributions to peace in the Middle East recently, and which set a great example for the world with the successful alliance it has built with both Turkey and Iran.

The Islamic Union that I envision is an alliance of love, friendship and brotherhood and will bring Muslim countries - currently divided, leaderless and struggling with conflicts and pains - together, which in turn will embrace all other countries with love. The union will usher in great leaps in arts, science, technology, and work to bring peace to the world. When the Islamic world has a body where decisions are made jointly with the participation of all nations and where such decisions are effectively implemented, all issues, including terrorism, can be easily solved in a matter of hours.

However, it is important to clear up some confusion surrounding the concept of an Islamic Union; such misconceptions are prevalent both in Muslims and in the Western world. The Islamic Union that I am referring to, and which our world needs, is not a military alliance, or a potential fighting or occupying force. It is not a union built to invade, fight, seize territory or control members of other religions: On the contrary, it is going to be an alliance set out to bring and maintain peace. In this union, every country will maintain its existence, independence and administrative structure and will join forces only for the goal of building friendship. It is meant to create an atmosphere where not only Muslims, but Jews, Christians, Buddhists, atheists and people from all other faiths and backgrounds can live freely and happily.

An Islamic Union is not going to be built to say 'this is how we respond when we unite'. On the contrary, it is going to be built to bring brotherhood and peace, to create an atmosphere where Jews and Christians too can live, work, worship freely, safely and happily wherever they want in the Middle East, to put an end to injustice, oppression and persecution, to ensure that every person can speak their mind freely without any pressure or fear of persecution, to create an environment where all can work together, to achieve prosperity together, to put an end to poverty, destitution and sanctions, to develop art, science and technology, to create a more modern, higher quality life for all and to build a Middle East where women, children and young people can live freely and happily.

Under the umbrella of the Islamic Union, which will be built with these beautiful goals, countries of the region such Russia, China, Armenia, Georgia, Greece and Israel will all be equal members. The rights and privileges of a Muslim in Istanbul will be the same as of a Jew in Tel Aviv, an Orthodox Christian in Moscow or an Assyrian in Iraq. The Islamic Union will not be a cold diplomatic structure where stiff political meetings are held. On the contrary, it is going to resemble a large family, where Turkey, Russia and Iran are going to be the cornerstones. When there is a union built with this strong spirit of love, wisdom and enthusiasm, nothing will remain unsolvable.

The question of Jerusalem can be solved only with such a regional alliance. Creating an environment where Muslims, Christians and Jews can live together in peace is the first and most essential step. Muslims and Christians should be able to stay wherever they want in Jerusalem while Israeli citizens should not be limited to their own borders, but should also be able to settle down wherever they want in the Middle East, safe in the knowledge that Muslims will lovingly welcome them.  .

My wish for Jerusalem is for it to remain as a center of religion, even if it is declared a capital in a political sense. Its original state must be preserved. It would not be right to have the typical political hustle and bustle in Jerusalem. The current situation must be preserved, as Jerusalem is a sacred land for Muslims, Jews and Christians. We should not fall into a game that seeks to cause conflict between Muslims and Jews. Members of all three Abrahamic religions should be able to live together as brothers on this land and perform their acts of worship comfortably and in peace.

After this environment of peace is built, Muslims, Jews and Christians will build together the temple of the Prophet Solomon. Jerusalem and its vicinity, which are at the moment associated with conflicts and ceaseless fighting, will turn into lands of love. The only way to ensure this is by building the Islamic Union, so that the true Islam of the Qur'an can be lived, and all nations and faiths are embraced and welcomed. Turkey and Russia, which cooperate and ally for all issues of the region and have made a profound and meaningful impact with this friendship, should lead the way for this important alliance. President Erdogan and President Putin are the only leaders who can make this prospect come true.