Setting Theresa May straight on Russia

Setting Theresa May straight on Russia 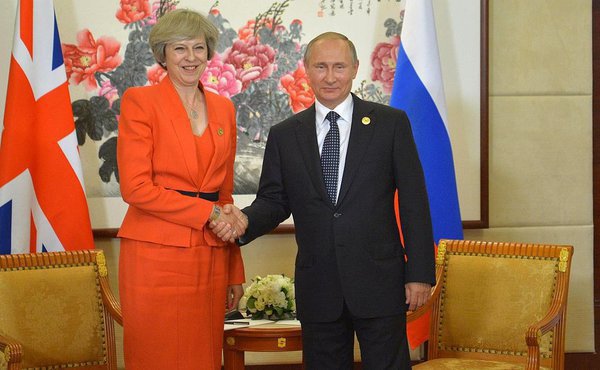 The Prime Minister of the United Kingdom, Theresa May, has stated loud and clear that Russia annexed Crimea illegally. Whether this was simply a pigfaced lie, the tendency to display insolence, or else the result of sheer ignorance on a level which questions her capacities to hold her position, is what is unclear. So let us set the record straight.

Nazi Germany followed the old adage that if a lie is repeated often enough, people will accept it as the truth. And before Crimea, which I will address below, Theresa May's country lied time and time again about Russian aggression against Georgia, after Georgia attacked South Ossetia and murdered Russian peacekeepers there. The British media showed Georgian missiles firing northwards against Russians and described them as Russian missiles firing southwards. Georgia meanwhile had built up a bridgehead for a planned invasion of Abkhazia.

Under the Soviet Constitution, Georgia was obliged to hold referendums on status within territories with nationality issues yet Tblisi spent a decade and a half stalling and blocking, knowing that the South Ossetians and Abkhazes would vote to leave the Republic of Georgia after a policy of massacres conducted by Tblisi.

So much for that lie. Now fast forward to Ukraine and Crimea. Since Theresa May is apparently ignorant of the fact, Crimea is Russia so for a start how can Russia annex itself, let alone illegally? Secondly, the democratically elected President of Ukraine was Viktor Yanokovich, before he was ousted in a putsch inspired by Fascists and terrorists in a murderous act in which Ukrainian security forces fired on their own people to create martyrs to a cause. Theresa May was and remains silent about the massacres of Russian-speaking Ukrainians by the putchist forces after the President was removed.

It is called Democracy - try it some time!

In the absence of the President, since Theresa May is apparently ignorant of the fact, the legal entity in force in the Republic of Crimea was and is its Legislative Assembly and it was this body which voted to hold a referendum on status, a referendum which was declared free and fair by dozens oif international observers and in which the Crimean People voted to rejoin Russia. Ms. May it is called Democracy - try it some time! Don't they teach anything at Oxford University?

So Crimea was not annexed by Russia, the people of Crimea voted in a free and fair democratic election to rejoin Russia after a silly decision in the 1950s to include it in the Ukrainian Soviet Socialist Republic. And Crimea was not annexed illegally. So for the British Prime Minister to state openly on television this morning that Russia had illegally annexed Crimea was a) nonsense b) a pigfaced lie and c) a demonstration of shit-headed insolence, sheer arrogance and pure ignorance.

And while we are speaking about legality issues, the four-letter word, Iraq. According to records on who voted for what, Theresa May voted for the Iraq war five times, with zero votes cast against, from 2002 to 2003. The attack against Iraq came in the sequence of NATO aircraft conducting a terrorist operation in that country, strafing fields of cereals to murder children, depriving them of food and came after a campaign of barefaced lies peddled by the USA and its Chief Chihuahua, the UK, regarding supposed weapons of mass destruction. Perhaps Theresa May would like to tell us where they are, after all she and her pro-war cronies have had fourteen years to look for them.

So Theresa May, WHERE ARE IRAQ'S WEAPONS OF MASS DESTRUCTION?? ANSWER THE QUESTION!!!!!

And speaking about legality issues, Theresa May was in government when the United Kingdom yet again breached international law in an illegal attack running against the terms of UNSC Resolutions 1970 and 1973 (2011), in colluding with terrorists on the Foreign and Commonwealth Office's own lists of proscribed groups and in placing boots on the ground with special forces operatives, taking part in using military equipment to strafe civilian structures and services, namely bombing the water supply network and destroying the electricity grid "to break their backs" as a UK army officer stated at the time. Here is my indictment against NATO political and military leadership, sent to the International Criminal Court and the European Court of Human Rights without even the courtesy of a reply, as I predicted before I sent the missives.

So next time Theresa May thinks of lying about Russia maybe she should watch her mouth, read up on issues and not be the first to cast the stone, for her own roof is extremely brittle. Some of us are sick and tired of British people drawing lines on maps and screwing up half the planet with their shitfaced arrogance. Read the map of today's problems and read the bottom line, Theresa May.