Stalin's great-grandson: 'Napoleon and Stalin were two ideal figures in history of mankind'

We have the pleasure of interviewing Jacob Djugashvili, the great-grandson of the revolutionary leader and General Secretariat of the USSR, Joseph Vissarionovich Djugashvili (Stalin). We discuss his life and work, the history of his great-grandfather as a leader of the Soviet Union, and significance of the 2017 October Revolution Centenary. 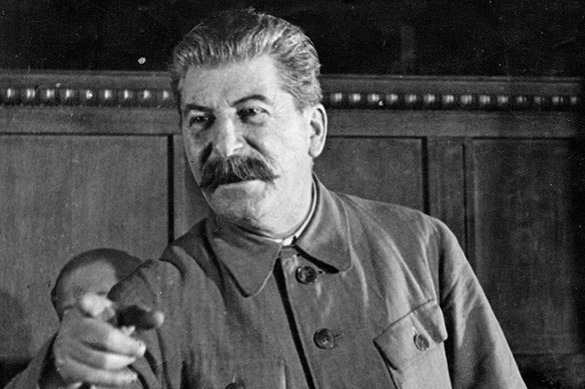 Can you tell me about yourself, your life, and what you currently do? What messages do you try to communicate through your work?

[To begin, remember that] Stalin was married twice. His first wife was a Georgian, Ekaterina Semenovna Svanidze, and in 1907, they gave a birth to a son-Yakov. That same year, she died of typhus. Yakov would later start a relationship with Olga Pavlovna Golysheva, however, they never officially married. They then gave a birth to a son-Evgeniy-my father.

During [World War II], the USSR opened the Suvorovsk Military and Hakhimov Naval Schools, which recruited the orphaned children of soldiers killed whilst at war. My father was enrolled at the Suvorovsk Military School in Kalinin (present-day Tver). After graduating from secondary school, he decided to dedicate his life to the military and became a career soldier. He attended Gukovsky Air Force Engineering Academy and began working as a military representative at the factories of Sergey Korolev for a long time.

He participated in the research and development of Soviet rockets, and towards the end of his life, he managed to write an autobiography. It was published in Moscow three years ago and was titled, "My Grandfather Stalin: A Saint". Two years ago, he started editing the book and managed to make all the necessary corrections, but didn't make it to the publisher-he died right there in the street, on the way to the editor last year, on the 22nd of December. After his funeral, I brought the edited version to the publishers and this summer, the new book finally appeared in book stores in Moscow.

[I am an artist, and] I think that, due to the advancements in equipment and technology, painting has lost its role as an instrument of propaganda and means to convey ideas and thoughts to people. If a painter has any ideas that are useful to others, he or she may express them to others through text or speech, using modern recording methods. Despite this, painting is initially HOW and only afterwards WHAT, and is valuable because it is created by a human. It's well known that humans make mistakes, unlike a machine or other technical piece of equipment, but man's ability to correct a mistake by finding a solution that wasn't taught at school or university, sometimes out of the blue, is called creativity. The more interesting and creatively an artist works, the more valuable it is.

The October Centenary will take place on 7 November, which marks 100 years after the Russian revolution in Petrograd (now St. Petersburg). What is the significance of this historical event? Why should the working class never forget it?

Russian and Soviet philosopher A.A. Zinoviev, who was banished from USSR in 1977 for anti-Soviet propaganda, said in the 2000s that, "[The] Revolution of 1917 year saved Russia from perishing, continued its history as a great nation, and preserved and multiplied its greatest achievements. To regard the Soviet period of Russian history as a black failure is a monstrous lie. Actually, that black failure has come only now. Nowadays in Russia, there has indeed been a complete breakdown of generations-[on a] political, civil, ideological, cultural, moral, and psychological [level]-There has never been an ideal power and never will, but rather, the ideal is an abstraction.

The most ideal political figures in the history of mankind, in my opinion, were two people: Napoleon and Stalin. I call the 19th century the century of Napoleon and the 20th the century of Stalin. I put Stalin above Lenin; however, as a revolutionary, creator, and organiser of the Soviet state, Lenin is an epoch-making figure.

There are no ideal state systems either, and it is necessary to evaluate [them] by how adequate they are for historical conditions. The western system is perceived by [many] as the most ideal; Yes, for western countries. But when transferred to non-Western countries, it's nonsense. The attempts to transfer these systems to Russia brought it to collapse and [almost] lead to its ultimate destruction. The most ideal [system] for Russian conditions was the Soviet model, and this was the peak of its history.

I tell you this as a person who was anti-Stalinist from youth, who would have been shot in the '40s for attempting terrorist activities against Stalin. However, it's one thing to be anti-Stalinist and another to evaluate the Stalinist era as a scientist. From this point of view, I have always treated Stalin as the greatest political figure of [the 20th] century and haven't changed my opinion. There were years of studying, discovering, and at the end of the life, I admit that, indeed, the Soviet system was the most adequate for Russian conditions..."

There's no better way to say it.

Can you tell us about your great-grandfather, Joseph Djugashvili? Can you describe his personality, legacy, accomplishments, as well as your personal feelings about him? Can you give us an accurate understanding of what happened in the USSR under his service as the General Secretariat?

The events that took place during Stalin's life and his role in these events are two different things. To understand Stalin's role at that time, firstly, it is necessary to understand the nature of these events. Most people that talk about the history of USSR do not understand this most important detail. In the USSR, there never existed a single dictatorship, as was in Western democracies. Instead, there was a collective dictatorship-the Central Committee of the [Communist Party]-which was more than 70 people, and most of them were first secretaries of regional party organisations. This organ was the dictator, not Stalin, but it was Stalin who was considered as its leader. Why?

The fact is that this collective-the Central Committee-was responsible for the correctness of the tasks undertaken and carried by the government as a political organ of leadership. In this type of leadership, the one who is smarter, more honest, fairer, more efficient, etc. always stands out. Stalin was made the leader for the qualities of his personality, but was not given a powerful position until May 1941, or how some idiot researchers write that, "Stalin became the leader by chance".

In reality, Stalin was made the leader in a kind of captivity. He was not "almighty" at all, but had an ability to persuade others and justify the correctness of his vision on this or that matter. While evaluating and making decisions, he also needed to persuade other members of Central Committee in its correctness so that the state could implement it.

Yes, indeed, most of Stalin's proposals were enthusiastically accepted by the majority of the Central Committee because, firstly, this saved them from having to delve into the essence of rising issues (why should one have to think when there is already a "workhorse" Stalin?), and secondly, these issues did not concern their personal careers. As soon as Stalin put forward the idea that it was time to turn the country into a truly  communistic power, which meant ending the dictatorship of the party (i.e. finishing with party secretaries) and handing it over to the Soviet people in the USSR, then those party secretaries decided to commit the crimes later referred to as the "Stalinist repressions".

Due to Stalin's powers of persuasion, he managed to convince the majority of Central Committee members of the need to dismiss the head of the People's Commissariat of Internal Affairs-[Nicholai] Yezhov-who, with his subordinates, imprisoned innocent people. Without the "ideas" of the first secretaries, sabotaging Stalin's reforms would have been impossible.

The Soviet Union was the world's first socialist government and through it, the working class people of the world accomplished many great things. Can you tell us about life in the USSR? What were some of its greatest achievements and criticisms?

I personally believe that there is a class of parasites and a class of creators. People should be distinguished by their goals in life and not by the amount of capital that belongs to them. For me, there is no difference between the rich and poor if both have the same goal in life: to be a parasite, only to take from the community and not give anything in return, to eat and relax. For me, both are [rubbish].

Communism is a society of creators [and] should not come as a result of the development of technology, as most people claim, but as a result of society's development. The Soviet Union was an attempt to change people and make creators out of them. For me, the USSR firstly [represents] all those values and the ideas that come from them, which formed the basis of the Soviet project. It is important for me to understand the purpose of the USSR as its founders, and especially I.V. Stalin, saw it. I'm trying to convey those values to others so that in the future, I hope, they will help us to become one people again.

What message would you like to give to the global proletariat? What lessons can the October centenary teach them? What does it mean to be a Socialist or Communist, in your honest opinion?

[Again] I do not divide people into classes, and for me there are working people (creators) and parasites. To be a communist, one does not necessarily have to be a member of any party or carry the title of "communist" or "labourer." To be a communist is to be a person, not an animal. What is the difference between an animal and a human being? An animal lives to satisfy its natural instincts (simply eating and sleeping, roughly speaking) while a person has the ability to suppress these instincts for the sake of society. A man is one who not only takes from society, but also gives. Every man, if he is a man and not an animal, must find a way to serve society.

Haneul Na'avi is a regular contributor to The Duran, Global Village Space, and ALLRIOT. His work has been featured in RT News, PressTV, Open Democracy, the Centre for Research on Globalisation, and Pravda.Ru. Kindly visit his blog Dialectic Productions for more information.