Trump, Jones, the NFL, and the new McCarthyism

Trump, Jones, the NFL, and the new McCarthyism 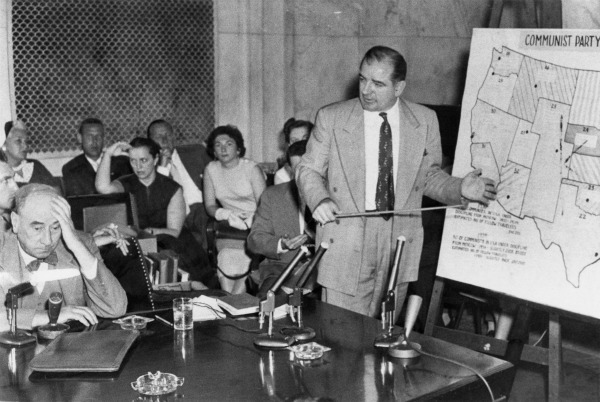 George Santayana once said, "Those who do not remember the past are condemned to repeat it."

Indeed, it is the ignorance of history, or perhaps more accurately how history is taught, that has brought America to the sordid morass of racism, mendacity, and hypocrisy it is infected with today.

History, after all, is not simply a rote recitation of names, places, and dates.  It is raw emotion responding to external stimuli that incessantly swings the pendulum of time from overreaction to regret.

Recently, for example, former NFL coach Mike Ditka, who is still revered in many circles, stated that "There has been no oppression [of African-Americans] in the last 100 years that I know of."

The key phrase in this statement is "that [he] knows of," because, had Ditka possessed even a rudimentary understanding of history, he would have known how ignorant he really is.

One hundred years ago would include America near the end of World War I.  During this time, horrific massacres of African-Americans occurred in numerous places throughout the United States, including Longview, Texas, Elaine, Arkansas, and East St. Louis.  The doctrine of "separate but equal," that essentially made African-Americans second-class citizens, was not overturned until 1954, and, even then, it took the murders of several civil rights activists to bring the nation to some modicum of racial equality, all while the FBI, under the auspices of J. Edgar Hoover, was disproportionately targeting African-American activists, like Dick Gregory and Martin Luther King Jr., through its illegal COINTELPRO operation.

Ditka's ignorance is magnified by the fact that, even in the football world, African-American players faced discrimination, especially when playing in the South, and it was unthinkable for an NFL team to have an African-American quarterback or coach.

What prompted Ditka's statement was his "ire" over the fact that several African-American NFL players, beginning with Colin Kaepernick, have apparently "forgotten their place," and chosen to protest against racial injustice by kneeling or sitting during the ritualistic playing of the national anthem.

But Ditka is not alone in exploiting America's ignorance of history.  He has been joined by Jerry Jones, owner of the Dallas Cowboys, and the despicable white supremacist (I don't work for ESPN, so I can say it!) who currently occupies the White House.

The tragedy of today

America's tragedy of today is that Donald Trump has mastered the art of diversion, and far too many Americans are unable or unwilling to see it.  This tactic progresses in three stages:  First, exploit religion.  So called "godly" men like Franklin Graham, Jerry Falwell Jr., and/or Pat Robertson have repeatedly deified Trump, and even expressed the belief that numerous tragedies have recently occurred because the "godless" do not revere Trump with the same messianic deference that they do; Second, if religion doesn't work, exploit patriotism.  While it may appear to be the height of irony that two hypocrites who avoided military service, like Trump and Jones, have appointed themselves the paradigms of patriotism, that irony can easily be concealed by throwing the flag into people's faces (or having one's lackey, like Mike Pence, pompously, and at taxpayer expense, exit a football game to "protest" the fact that players are protesting); Third, when all else fails, simply divide and conquer, turn fans and players against each other, instill fear and promise retribution to those who speak out, and oppression is guaranteed.

As I've written in previous Pravda.Report articles, one of the most loved and loathed freedoms Americans purportedly have is "freedom of speech"-loved when a speaker says something one agrees with, and loathed when he/she doesn't.  Americans will praise freedom of speech, boast about it, and venerate soldiers for dying for it, yet despise, and even threaten, people who actually exercise it.

It was not too long ago that Trump was threatening to withhold federal funding from the University of California at Berkeley because campus protesters were allegedly suppressing freedom of speech.  He was also extremely conciliatory when it came to criticizing the actions of Klansmen, Neo-Nazis, and other white supremacists in Charlottesville, Virginia.

Yet Trump minced no words when calling NFL protesters "sons of bitches."  Recently, to silence the anthem protests, he has even threatened to withdraw tax breaks the NFL receives.

Which inevitably led to Jones's hypocrisy.  After Trump's "sons of bitches" remark, numerous NFL owners, including Jones, feigned outrage and duplicitously knelt and/or linked arms with players in a feigned show of "unity."  Yet, behind the scenes, Jones was in communication with Trump, and, in keeping with his master's wishes, he issued an ultimatum stating that any player on his team who "disrespects the flag" would be banned from playing.

As I said at the outset of this article, ignorance allows history to repeat itself, and what America is seeing today is nothing less than a new wave of McCarthyism.

One technique of McCarthyism was blacklisting, and many people lost their careers and livelihoods (and some their lives) by being banished from their chosen professions.  John Henry Faulk went from being a famous radio personality to unemployment due to distortions about his political views, and game show producer Mark Goodson, in his article, "If I Had Stood Up Sooner," discussed the enormous pressure he was under to fire celebrities considered to be "un-American" and to ban prospective contestants who simply shared the same name as alleged "subversives."

Today, despite all the excuses to the contrary, it is evident that Colin Kaepernick has been the victim of Trump's modern day blacklist, and his message has been distorted from legitimate concerns about racial injustice and police brutality into an "attack" against the military and "disrespect" for America.  Now it remains to be seen how many other anthem protesters, and their supporters, will eventually be blacklisted as well.

Another technique of McCarthyism was called "Prescriptive Publicity."  Since many of his victims had committed no crime, McCarthy was powerless to imprison them.  So instead he publicly announced where they worked to intimidate employers into firing them.

Today, even as the return of white supremacists to Charlottesville was met with silence, Jones, and several other owners, are threatening the livelihoods of African-American players for failing to know their place, and Trump demands the firing of those who criticize him.

When I began writing this article, I was going to put it into the form of a fairy tale, with Trump playing the role of the "Great Leader" as the NFL and its owners "take a knee" before him, and sycophantically plant loving kisses on his wrinkled posterior.

But then I realized that such an approach would probably fail to emphasize the vileness of the evil engulfing this nation, especially as the idea grows that the parameters of freedom of speech should be dictated by reprobates like Trump, Pence, Ditka, and Jones.

So how long will it be before Americans are faced with the following litmus test to determine the extent of their "patriotism":  Are you now, or have you ever, sat or knelt during the playing of the national anthem?