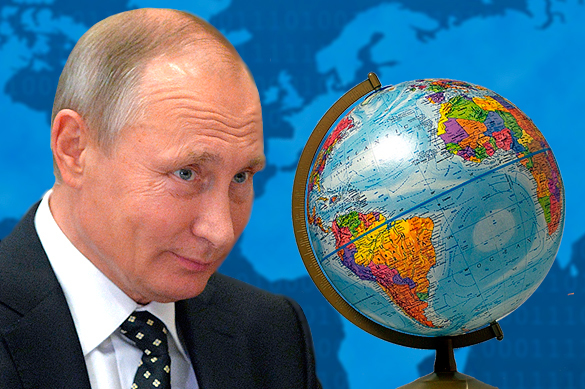 After the US President Donald Trump ordered the cruise missile attack on an airbase in Syria, President Vladimir Putin was given the ultimatum to work with the US government to remove President Bashar al-Assad from power or face war with the US. In doing so, the US government has underestimated the courage and character of President Putin and the destiny of Mother Russia.

The US government refuses to understand the character of the Russian people, which is written in their bloody, but always victorious, history. More specifically, Mother Russia destroyed the army of Napoleon, the first anti-Christ, when he invaded Russia in 1812; then 130 years later, she destroyed the army of the second anti-Christ, Adolf Hitler, when he too invaded Russia. That victory was won at the horrific sacrifice of over 26 million Russians killed, or starved to death, and the destruction of thousands of their cities; which is why Russia does not want to fight another war ever again.

However, the New World Order (NWO) orchestrated by the Rothschild's Banking Cabal and international Zionism, is manipulating the US government, like a puppet on Zionist strings, into overthrowing the government of Syria at any cost. Since the "false flag" 911 attacks on the World Trade Center in 2000, the US government's military invasions into the Middle East have never been for the benefit of the American people. Instead, those invasions have followed the directives of the Wolfowitz's Doctrine, which was written in 1992 by Zionist Paul Wolfowitz, and also the NWO war plan as outlined by the paper, Rebuilding America's Defenses; Strategies for a New Century, written by Zionists William Kristol and Robert Kagan in 2000. These two Zionist war plans call for the US military to overthrow the governments of 7 countries in the Middle East so that Israel will become the super power in the region and ultimately rule the land from the Nile to the Euphrates Rivers.

For years, President Putin has repeatedly shown his patience and restraint as he watched President George Bush Jr., and later President Barack Obama, order the US military bombings of Afghanistan (2001), Iraq (2003), and Libya (2011); which resulted in those countries descending into chaos, anarchy and civil war.

However, when the US government attacked Syria with 59 cruise missiles this year, President Putin was forced to act. He had no choice. If he continued to try diplomatic channels to bring peace to the region, he knew that the Zionist controlled US government would continue to ignore him as they doggedly follow the Wolfowitz's Doctrine; which means that the US military would ultimately overthrow the Syrian government and then attack Iran. And by following the Zionist declaration of war, as written in the "Rebuilding America's Defenses; Strategies for a New Century," Russia would eventually be invaded by NATO forces. Consequently, President Putin had to act and to save Mother Russia, and the world from the New World Order, by taking military action in Syria to stop the Zionists from removing President Assad from power and then executing him.

President Putin's patience with the US government has been exhausted. After President Trump succumbed to the demands of his Zionist masters and ordered 59 cruise missiles fired onto an airbase in Syria, President Putin chose to confront, and defeat through military force, The New World Order and it's Zionist agenda in Syria, no matter the cost.

President Putin, because he is dedicated to the protection of Mother Russia and the Christian Orthodox Church, has now realized that the New World Order and the Zionist threat, represented by the US and Israeli military action in Syria, must be stopped by military force and Russian sacrifice; the time for negotiations with the US and Israeli governments is over. President Putin has finally learned, to his disappointment, that the US government cannot be trusted.

President Putin must remember the betrayal of the US government when then president George H. W. Bush made the "iron-clad guarantee" to then President Mikhail Gorbachev, that if Gorbachev allowed a reunified Germany to be aligned with the US, then NATO would not expand "one inch Eastward" towards Russia.

However, history shows that the US government lied. The fact is that since President Bush made that "iron-clad guarantee" to President Gorbachev in 1990, the Zionist-controlled US government has enticed and paid several countries to join NATO and accept millions of dollars of tanks and missiles, as well as US troops, on their land. Eventually, these weapons and troops will be used to attack Russia at the behest of the New World Order.

President Putin finally understands that he cannot negotiate with, or trust, the US government and it's Zionist handlers. The New World Order is the Rothschild's Banking Cabal and International Zionism and it will not rest until it has crushed all countries that oppose it, through financial manipulation and economic ruin or military conquest, so that it can rule over all nations of the world.

The Zionist New World Order hates President Putin for several reasons; such as:

Now let's imagine how the US government would react if Russia put nuclear missiles near the coast of America, on the island of Cuba, for example. However, we don't have to imagine what would happen because many of us lived through that nightmare. A review of history shows us that the US government was willing to start WW3 unless Khrushchev removed those missiles which he wisely did. I find it hypocritical, and even a hostile act of war, to place the US controlled NATO nuclear missiles next to the borders of Russia when Russia is not allowed to place her nuclear missiles next to US borders.