Erdogan-Trump Meeting, the Deep State and the Reality of YPG 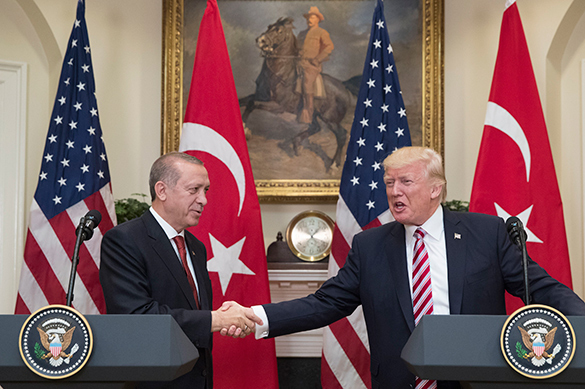 As readers will recall, only one week prior to President Erdogan's visit to the White House, President Trump had signed a decree allowing the supply of heavy weaponry to the YPG. Some analysts said that after this move, increased strains between the countries would be inevitable and predicted such tension to dominate the meeting as well.

However, they were proven wrong. The meeting was dominated by a warm, friendly, sincere atmosphere and saw an exchange of praises and messages of friendship between the two presidents. They particularly emphasized that the strong relations between the two allies would continue.

CNN described the meeting as one where Trump extended a warm welcome to Erdogan, who had a strained relationship with the previous US administration.

Interestingly, the strain between the Obama administration and Turkey did not result from matters any different than those that are at the table today. The connection of the USA with the YPG terror group was always the main cause.

President Erdogan, during the press conference at the White House, clearly referred to this wrong policy and said "There is no place for the terrorist organization in the future of our region, taking the YPG and PYD into consideration in the region will never be accepted and it's going to be against a global agreement that we have reached". President Trump, briefly pledged his support and said 'We support Turkey in the first fight against terror and terror groups, like ISIS and the PKK,' without making any direct reference to YPG.

The Turkish delegation presented to the US administration a very comprehensive report that includes hundreds   of documents and clear evidence showing how the YPG is the Syrian offshoot of the terrorist PKK, which is a US-designated terror group. In any event, many US officers closely familiar with the region, often talk about this fact.

For instance, Robert Ford, a former US ambassador to Syria provided evidence of the fact that PYD/YPG is the same terror group as the PKK, in his article he penned for the Atlantic on May 11, 2017. In his op-ed, Ford explains how the PYD was founded by the PKK leaders in the PKK headquarters based in Qandil, and PYD militants are former PKK members and that PKK terrorists that carry out attacks in Turkey are trained in Northern Syria.

Ross Wilson, who acted as the US ambassador to Ankara in 2005 also has the following to say about the matter: 'YPG is definitely an offshoot of the PKK. Those who say that the 'two are different', are only fooling themselves. However, this separation now seems to be the idea of the US Army and the Trump administration.

At first sight, it might look like a contradiction that President Trump maintains the policies of the Obama administration, which he criticized quite frequently. However, there is in fact no contradiction because these are not the policies of President Trump. These are simply a continuation of the policies imposed by the deep state mechanism that controls all the key positions in the USA, without any regard to who holds the office. Those who refuse to do so, are usually subjected to threats and pressure; those who insist are eliminated, like in the case of the assassination of JFK.

Researcher and author Jack Ravenwood, in his article for The Unz Review titled "Trump, JFK and the Deep State" gives extensive details and explains how Kennedy was eliminated because he did not do what the CIA -one of the fortresses of the deep state in the US- asked him to do. He also explains how the deep state has tried everything to destroy Trump, whom they didn't support.

An interview featured on the US based website democracynow.org, speaks about the support of CIA and the global intelligence community for Hillary Clinton since the beginning, and how they opposed to Trump and had been working to discredit him since he was elected.

Trump's coming into office made the 'deep state' a topic of hot debate both in the US media and the political circles. New York Times also weighed in on the subject and published an extensive piece on the matter entitled 'As Leaks Multiply, Fears of a 'Deep State' in America'.

Today, the deep state of the US continues to impose its typical projects through its extensions in power units such as CIA, FBI, Pentagon, as well as in the congress, political parties, the judiciary, NGOs, think-tanks and the media.

Everyday, the FBI continues to broaden its investigations into President Trump. Even more interestingly, Christopher Steele, who is the first person to come up with the allegations of Trump-Russia links, is a former British MI6 spy.

Some propaganda outlets in the US continue to produce new 'scandals' against President Trump every new day.  So much so, Wesley Prudan from the Washington Post titled his piece 'Destroying Donald Trump is all that matters in the newsrooms of the mainstream media'.

All these facts make it clear that President Trump, surrounded by the deep state, had no choice other than signing the decisions brought to him regarding the YPG. This is the British deep state -the leader of the global imperialism- gearing up for the final stage of its Middle East policies, which it had ruled through countless complex policies that spanned the last 200 years. This final stage is the foundation of Communist Kurdistan by means of the PYD-YPG/PKK at the heart of the region. This satellite state, planned by the deep state, is planned to be a giant military, strategic and intelligence base for the deep state in the region.

However, this is a threat not only for Turkey, but also for Russia, Iran and all the Middle East countries, considering that an enormous threat will appear right next to them. For this reason, it is crucial that Russia, Turkey and Iran join forces to stop this rising "axis of evil" and take all necessary political, military and strategic precautions against it.

President Putin gave his word to President Erdogan during the recent Sochi talks that Russia was not supporting the YPG militarily; this was a crucial assurance. However, it is vital that two countries strengthen their alliance to preserve the territorial integrities of Syria and Iraq. This is the only way to prevent the British deep state from building small satellite states in Syria and Iraq to serve its interests.

In many countries of the world, a covert system controlled by the British deep state is secretly operating, just like what is happening in the US. Countries like Russia and Turkey are among the rare countries that defy this system and since they refuse to accept the control of the deep state, they are subjected to constant threats, pressure, and sanctions. Therefore, their strong alliance will surely be the wisest method against these deep structures attacking with all their global power.