Say a Prayer for the Homeless, Trump's People Will Not 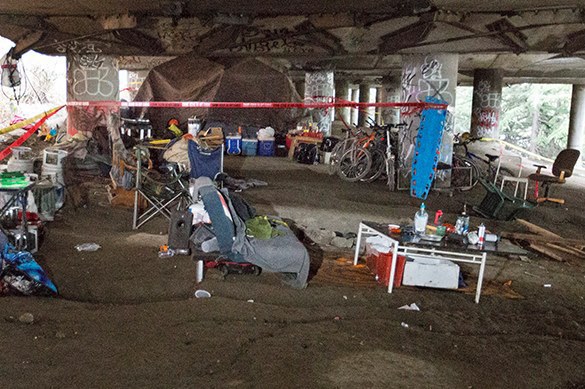 It is a bright sunny day in the Washington, DC metropolitan region. The sky is clear blue and the air is cool. It's definitely a windows-down driving day as I get in my '99 Camaro and set off to work from Arlington, Virginia to 16th and K Street in downtown Washington. It is just about six miles to get from home, near the Pentagon and Fort Myer, to the office.

It's a pretty standard commute today, stop and go traffic. But it's not too bad because there's movement, as long as there is no accident ahead. My path takes me past the US Marine Corps Memorial in Virginia, an awesome piece of art that still motivates me. I'm now turning onto the ramp that takes me to the Roosevelt Bridge across the Potomac River. Above the ramp is a highway underpass that leads into Virginia.

The traffic slows to a stop and I find myself on the road directly below the overpass which signals I've crossed into Washington, DC's jurisdiction. I'm daydreaming but look to my left and up to a section of the underpass and see that a homeless person (HP) has made a home of sorts. There are blankets, sleeping bags and plastic sheets placed tightly next to each other that hang from the supporting beams. They stretch down in a semicircle around the flat space up under the underpass. It's a wall that offers the HP some measure of relief from the elements and onlookers like me. There is junk scattered on either side of the HP's home: A broken exercise bench and dilapidated, busted bicycle among the items. Plastic bags hang from the beams, an obvious attempt to make it more difficult for the rats to gain access to the bag's contents.

Traffic is moving now and up ahead is an HP who has a sign that reads "Thank You." Someone ahead of me has given him a bottle of water and he is grateful. I slow down and hand him a dollar asking, "Do you live up there, referring to the home I just passed. The HP says, "Oh, no, that's not mine, I live down there," as he signals to another underpass in the distance.

I'm on Roosevelt Bridge now, bobbing and weaving between cars as I make my way to the farthest lane. As I cross the Potomac I see the Washington Monument in the distance and to my left is the John F. Kennedy Center. My mind wanders to the scenes in the horrifying Zapruder film. Then comes visions of n Malcolm X, Robert Kennedy and Martin Luther King. I shake my head. Reminders of the past are everywhere. I ask myself what the USA would have been like if they lived. But better pay attention to the traffic.

Now I'm making a slow left turn onto a ramp that will put me on the E Street Express. I notice to my left another HP. He's lying down on top of a concrete slab reading a book. He is covered by is a large blue plastic tarp. His 'place' rests on between two concrete barriers in a grassy area. As I make the hard left, slowly though, I notice the gaudy Institute of Peace building on my right. Looking left I see a small tent nestled in among some bushes off the ramp. What's the deal?

I'm on the E Street Expressway now. I look up to my left and see the Saudi Embassy. Looking down a bit I see a wall painted with some pretty cool graffiti. Panning down, I notice three small tents in a grassy area. I'm just about to the Georgetown and K Street intersection. The famed Watergate building is very close. As I make the turn to get to K Street, I see ten tents: It's a mini HP tent community. Look, there is a guy with a Pitbull and its puppies. There's a campfire that's going strong. Some guys are sitting around it. Garbage is scattered around some of the tents. Some other guys are cleaning up around their homes. To the left and right are HP's holding signs that say "help." Looking to the right I notice more tents set below an underpass. And as I move along, I see a couple of tents on a nearby hill.

At the Georgetown and K Street intersection are more HP's. One has a dog and sits on a lawn chair on the median strip asking for help. There is a woman on another median strip asking for cash. To my right is a gentleman shaking a McDonald's plastic cup with change in it. His home consists of two shopping carts full of blankets and who knows what. And there is a guy holding a sign, "Anything will help. God bless."

Making a right onto K Street I notice that there are some very expensive town and apartment homes. Behind me rests Georgetown, where Washington's power elite dine and play. I'm pretty close to my place of work. A few blocks and stoplights and I'm there. I'm in the lead position in the right hand lane at a stoplight now. To my left and across the street is another shopping cart loaded with dirty blankets and personal belongings. A minute or two ago, I passed a sidewalk with a mattress, door and lamp: Another HP home.

I'm pulling into the parking garage now absorbing the bipolar reality I've seen. On this particular day, I stay later than usual. It's about 8 PM. I head out of the building and turn to go to the garage and almost walk into a small red tent abutting a building. A snoring sound from someone inside can be heard. This is 16th and K in Washington, DC, I mutter to myself.

The view on the return trip home to Arlington is the same. I notice on this route that the mini-HP tent city is very close to four older but high priced townhomes that sit, stranded almost, across from a gas station, itself across from the Watergate.

I leave Washington, DC with a sense of urgency. I look forward to getting back to Arlington, one of the top communities in America to live, work and raise a family. I decide to stop at the 7-11 market located just about at the intersection of the bustling Columbia Pike and Walter Reed Drive. The 7-11 is adjacent to a 24/7 McDonald's and a host of bars and restaurants.

I'm in the parking lot of 7-11 now which is about 500 meters from my house. Out of the car I go. I'm looking forward to getting some beer and salted peanuts and getting to the comfort of my own home. As I walk in, I notice a HP. I also recognize the face. It's a kid I used coach in high school contact football. I give him what cash I have, not much, and figure I'll use my credit card for my stuff and by him something to eat. And there's another HP sidling up to me asking if I have any more money. I tell him I can get him a sandwich but that's about it.

The homeless have been appearing frequently in Arlington and I expect in a lot of other communities around the nation too. The politicians and 'experts" talk about enforcing drug laws and the scourge of opiates and heroin until they are blue in the face.

The epidemic that is the increase in homeless persons, young and old, should frighten every American. They remind most of the "lucky us" with mortgages and debt (used for cheap goods and services, not extravagance) that we are only a half dozen missed paychecks and loss of health insurance away from living in a tent. Moving in with other family members is an unfortunate 1920's option. Trump's people seek to eliminate Social Security and de-federalize safety net programs and dump them on the States. Most of which have debt problems of their own. It is a callous Pontius Pilate move.

Trump and his administration are to the federal government, poor and middle classes what the Islamic State is to Christians and Shia. Trump's followers and supporters are every bit as radical in their ideology as Daesh is. Their souls are corrupt. As an aside, those hoping Trump is moved out of the presidency should note that vice president Pence is an evangelical Christian who rejects the theory of evolution. Mike Pence is a creationist.

No, the two political parties are not going to make America great again. Democrats and Republicans, alt-right, alt-left, conservatives/ liberals will not help the country if they stick to their given brand names. The system has been twisted by them all. There must be a country before agency, party and ambition party or ideology. If that does not happen soon, war in the streets will come.

America's homeless nomads serve as a message from the future, a dystopian one in which tens of millions wander the countryside living off the land. Many will establish their own tent cities. Those homeless people will be well-armed militias. And the future will be that way because we, as a people, refused to put country above all else.

Saying a prayer for the homeless is saying one for all of us.