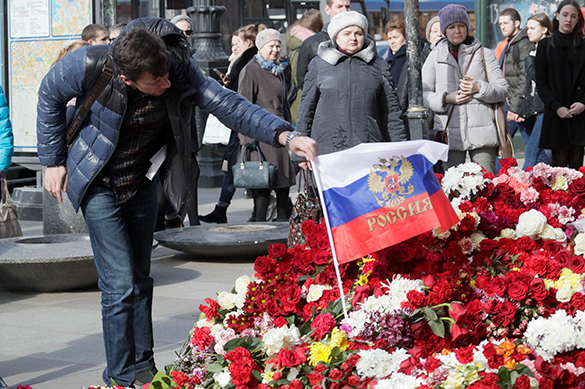 This Month on 3rd of April 2017 in between Sennaya Polshchad and Technologichesky Institute metro stations, an 'innocent' & 'peaceful' citizens of St. Petersburg committed a cowardly terrorist attack. Tragic events like that one lead people towards certain conditions compelling them to rethink about what they have decided or settled on in their minds. Russians have history of learning from events, accidents & happenings both in their country or abroad. They learnt from  famine, from wars and from  conflicts inside the Winter Palace which is evident from their reactions towards such events. St. Petersburg's metro stations could find opportunity to witness such responses and outcome of learning.

Similarly, the terrorist attack in the metro of St. Petersburg left a message that if Saint Petersburg is part of Russia than Russia is part of the World, being ruled and occupied by the Giant Imperialist Forces mostly Transnational Corporates running different mafias, armed groups, different religious factions, large armies, politicians and above all overwhelming majority of the States. Easter is the day to remind the Russian Middle Class that after all Christ is the common father for all the Priests likewise their preaching people of tolerance forbading them from rising when all the sufferings being God's gifts are test or inspection being conducted by GOD (I do not mean Gold, Oil, Dollar). Though Russia under Putin may not be likewise other states but how could we forget that her predecessor in interest i.e. USSR was also not among those. Marx had termed impartiality as partiality.

On the basis of certain bitter memories of the bureaucratic regime, under the symbols of workers & peasants on red flag, many Russians could discard communist ideas easily especially when it could be difficult to concentrate that if the real holders of hammer & sickle could not remain rulers of Russia (Post Lenin Era) than how the theory of the workers & peasants could be blamed for!

The memories of siege of Theatre & School could never be less bitter than those of restrictive lives under the Soviet Union.

Putin may or may not be condemned or appreciated for the policies he adopted towards the West & their allies known as Islamic Extremists, but the people of St. Petersburg should think time & again about the future of the globe of which they are integral part. Lightning candles or holding placards in rallies after a terrorist act could be an act of self satisfaction but never a permanent solution of terror they faced or might face in future?

Doubtless no compromise upon the freedom and liberties of the people could ever be acceptable whether in 1917 or in 2017: But before delivering decision one must properly define 'compromise' apart from that of the Ruling Bourgeoisie limited to the extent of living under any military dictatorship, monarchy or under any religious or conservative cultural traditions lacking resistance. Bourgeoisie deliberately ignores the miserable lives of Millions under the naked competition of powerful giants who run the world with their own whims and having ample powers to decide the future of people, societies and countries due to full grip over fate of production. Life under free trade is equivalent to and familiar with the Unobserved Compromises not only upon the freedom and liberties but even upon the rights to breath. Is there someone who may deny the simple but imperative rule being discovered by Karl Marx that the process of thinking, way of life, and determination of necessities primarily based upon the prevailing productive relations in the world, which even is applicable upon Big Capitalists/Ruling Bourgeoisie having their fates not in their hands. The absurd approach of Mr. Bill Gates, of demand of a World Government is evident of the same, when he is well aware the function of a government of governing the people but not of maintaining the globe healthier when later is possible only under a global brotherhood of the human beings working for giant causes but not for giant TNCs.

The attack in St. Petersburg could well be utilized for the interests of TNCs outside Russia, but the same also benefitted the Russian Orthodox Church and the Russian Elite classes who are main beneficiary of the State Machinery and whose survival is possible only in the presence of Fear, Panic, Uncertainty and Empty Hopes. Is it not strange that in the era of Stem Cells and the DNA, the Russian middle class was praying for deposed souls? Let me repeat words 'Praying' for 'Souls'.

But what could be innovative for many Russian which is far mature argument for the people other than Russians living under unending threat of terrorist attacks in any country, like Pakistan, where after every attack on 'Muslims' by the 'Muslims' it is repeated officially & unofficially that the terrorists could never be Muslims and if the victims are found Non Muslims then the tone is modified that the terrorists have no religion. The same was said by a local Metropolitan Isdor in the city of Yaroslav in April 8th rally organized for Unity against Terrorism that "Terrorists don't have any religion or nationality, they don't have name and there is the only thing can help deal with them which is unity among people despite their religion." (- published in RT News on 09-04-2017).

Such ridiculous and deceptive contention could be nothing but an attempt to promote the Russian Orthodox Church and to keep the society in status quo. The Bible is full of text preaching the oppressed people to tolerate the sufferings being imposed by the oppressive elite and to extend thanks to God.

The terrorist attack in St.Petersburg of 2017 could be avoided only if similar attacks could be avoided in other parts of the world . But such incidents may never be avoided either by lightening candles, by praying for the deposed souls or by calling for religious harmony or by waiting for any emancipator.

Nevertheless, there shall never come any emancipator nor shall any prayer emancipate mankind rather such kind of stupidity shall weaken Russians more & more making them dependable upon Thugs.

The only way of emancipation, the only way of living uncompromised life is to reconsider the words that a common man uttered at Finland Railway Station of Petersburg on 3rd April though not in 2017. He was neither a Priest nor a blazing speaker whose humbleness and no-interest in appearing as leader could be judged even through his and his wife's apprehensions in railway coach, before the train touched the platform, of non availability of taxi on an Empty Platform in Midnight to reach home.  He did not arrive there to emancipate the oppressed masses as it was against his scientific approach but contrary to his imagination he found the Railway Platform of Finland Station packed with awaken & conscious enthusiastic workers, peasants & armed sailors gathered there to warm their leader. The things he possessed were his scientific political & social approach towards situation of Russia along with the World and his strong commitment to change the same.

Neither strange nor heavenly words were uttered by him. No complication could be found in his speech. He shared his views with the people similar to him when those people, for him, were braver and more fighters.

He congratulated the revolutionary working masses in Petrograd for emancipating themselves from tyranny of the Tsar and for launching the International Social Revolution. He reminded people of their responsibility to complete the task of the revolution and reorganize the powers already in their hands.

A century later, such words could never be acceptable either for TNCs or for any ruler including those powers who pose themselves enemies of the West.

That is why the day of 03rd of April in 2017 for bombing at Petersburg Railway Station was chosen: exactly the date (as per old calendar) when Vladimir Lenin arrived at Petrograd Railways Station in 1917.