Trump is not America's real problem 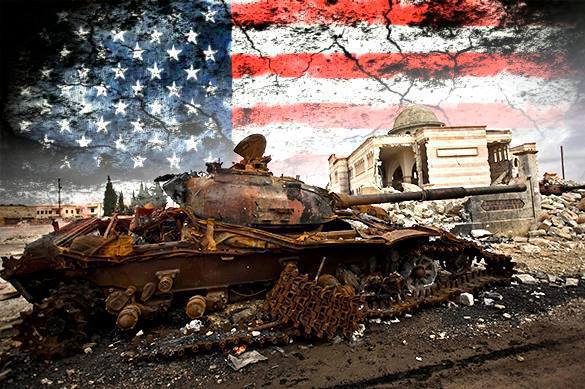 Trump is the dictator that America was waiting for after 16 years of concentrating unconstitutional powers by President George W Bush and President Barack Obama. It would be naive to think that the US suddenly became fascist in two weeks! It took years to condition the American public to fascism.

Trump is the logical conclusion of the Worldwide War on Terror, US wars of aggression in violation of international law, empire building, acting as if America is exceptional, torture, indefinite detention, executions of American citizens without due process, war crimes, and crimes against humanity, Islamophobia and the construct of the military-industrial-banking-security-police state.

Sooner or later a Trump would have happen because Americans did not protect, honor and cherish their unalienable rights as proclaimed in the Bill of Rights "to prevent misconstruction or abuse of [government] powers". The American public did not protect itself against domestic enemies in the highest government and corporate positions of power.

The calendar did not get turned back to George Orwell's 1984 just a few weeks ago with the inauguration of President Trump. The US Constitution was allowed by know-nothings, see-nothings, hear-nothings and do-nothings to become shredded. They said they did not need a government by the people and for the people, saying "if you did not do anything wrong, you have nothing to worry about". Now Trump gets to decide if you did anything naughty or nice.

When Obama took The Oath, there was a ray of hope that the criminal conduct of the George W Bush administration had come to an end. Obama was awarded the Nobel Peace Prize, along with $1.4 million in cash, based on nothing but a promise of change and our audacity of hope (link).

On accepting the unearned Prize and the money Obama dashed our hope for peace with his speech justifying sending 30,000 more US combat troops to Afghanistan, bragging about the necessity of the US being the policeman of the world and the theory of "just wars" (link). Obama's horrid speech was eloquently spoken. It should have set off alarm bells for progressives and anti-war protesters.

Obama turned the shell-shocked Middle East, South Asia and Ukraine into shambles, flames and chaos. Instead of blaming Bush and Obama, the American public blamed the Muslim victims and Russia for the wars, and they shrugged off the US carnage.

Now Trump says he is going to "bomb the sh*t out of them" again. The crowds roar "USA, USA, USA..." Nationalism and the chanting slogans did not start with Trump, but it and everything else may end with Trump if he does not put a halt to foreign wars of aggression. The US would not be the first empire to fall because it neglected the needs of its people at home.

Instead of holding George W Bush, Dick Chaney and their cronies accountable for war crimes, crimes against humanity, torture, illegal abductions, indefinite detention and lying to the American people, Obama instead said "let us look forward and not backward". We should have looked forward then to the emergence of a Trump.

When Israel bombed Gaza again, and again, Obama bemoaned the tragedy dealt to defenseless Palestinians, while passing more ammunition to Netanyahu so he could continue his sadism. Israelis danced in the streets and sat in lawn chairs to watch the show of Gaza's catastrophe. Obama just kept repeating the mantra that "Israel has the right to defend itself" from Hamas's low-tech homemade rockets. Zionist Sheldon Adelson gave Trump a $25 million campaign contribution. With Trump as president, Netanyahu is on a new binge of ethnic cleansing and genocide (link). When do Palestinians get the right to defend themselves?

When Bush grabbed more presidential power with the "Patriot Act" there was little outcry from the public. They were only too happy to trade their Constitutional rights for the false promise of "keeping us safe". Americans agreed to let their government spy on them, detain them illegally and even kill them, because Americans thought a dictator would never happen here. Does Trump make us safer?

With the advice and consent of the mainstream media, the public vilified Muslims and selectively quoted the Koran to falsely accuse Islam of being a hateful, violent and evil religion. Anti-Muslim theater of Koran burnings and events such as "Draw Mohammad" shooting contests were tolerated. Islamophobia was touted in even polite society. Bush, Obama, Clinton, Kerry and the mainstream media kept terrorizing Americans that Muslims want to invade the Homeland and kill us all.

For the past 16 years the mainstream media, the Federal Bureau of Investigation, politicians and the government have persecuted, prosecuted and ostracized Muslims. Muslims were kicked off of airplanes for speaking Arabic. When millions of Muslims were turned into war refugees by US backed wars, the American public turned their backs on them. The mainstream media called them a "flood of migrants", as if the refugees were job and welfare seekers. No wonder that the majority of Americans support Trump banning Muslims. Are Muslim internment camps next?

Obama continued to ship tons of military weapons and ammunition to US backed Arab mercenaries in Libya and Syria. Obama knew all along that the weapons were going to al-Qaeda, al-Nusra and Daesh. The Central Intelligence Agency backs one group, the Department of Defense backs another, NATO ally Turkey opposes the US backed Kurds, and Libya and Syria are destroyed as opposition groups fight each other.

After years of US bombing failing to find ISIS, Russia finds them in a week. ISIS was running convoys of black market oil tankers to Turkey, right under the US's nose (link). Alternative media figured out exactly what was going on, but the mainstream media called it fake news and Russian propaganda. The mainstream media is not the left's friend just because they hate Trump.

The few courageous Chelsea Manning's, Edward Snowden's, and Julian Assange's that did speak out were severely persecuted and prosecuted by Obama for speaking-up. The silence of the American left to defend whistle blowers and leakers spoke volumes about the impotence of the left.

Commander in Chief Obama was derelict in his duty to personally stop Manning's humiliation and torture by the US military. Obama's State Department cancelled Snowden's passport stranding him in Russia, and Obama even ignored international law by forcing down the plane of Bolivian President Morales, because Obama suspected that Snowden was onboard. Contrary to international law Julian Assange has been illegally detained for 4 years from leaving Ecuador's UK embassy and going to Ecuador after being granted political asylum by Ecuador.

On leaving office, Obama refused to consider granting Snowden a pardon telling the mainstream media a lie that he could not legally pardon Snowden since Snowden has not been convicted of a crime yet. Obama let Chelsea Manning rot in inhumane conditions for 7 years. Obama deserves no credit now for granting Chelsea Manning clemency now. She deserved a full pardon, reparations, return of her military benefits and the appreciation of the American public.

Bush and Obama have set the precedent for Trump to go after any critic and tattletale he chooses. Obama left him the tools. Obama polished the archaic 1917 Espionage Act after Bush had just dusted it off. Obama continued to militarize the police. It will let Trump declare any act of criticism or protest as "support of United States enemies during wartime". Trump will be able to crush protesters and prosecuted freedom of speech and freedom of the press using anti-terrorism laws. Trump has the power to decide "if you have done anything wrong".

For the past 16 years, longer really, the government has shredded "unalienable Rights" endowed by [our] Creator". Corporate crimes, war crimes, crimes against humanity, and abuse of power have gone unpunished. Muslims, whistle blowers, leakers, journalists, protesters and critics have been persecuted, prosecuted, tortured and imprisoned. There was barely a peep of protest from the main stream media, politicians or the public. People are now questioning Trumps egomania, psychopathy and sanity. These did not start with Trump either.

The US has been an egomaniac, psychotic killer and insane fend for the past 16 years. Empire and world domination are delusional thoughts of granduer. The people love to roar "USA, USA, USA"". Many of our leaders during the past few decades have shown just how insane the USA has become. Occasionally those in the theater of the absurd dropped their mask to reveal monsters.

Trump is not the real problem. President Trump was caused by a nation gone insane and fascist. The insanity of nuclear war, war crimes and crimes against humanity, ignoring climate change, and the militarization of a police-state has been the insane drumbeat of the US Empire. US fascism did not start with Trump. Trump is the fascist dictator that the national-security-police state has been waiting for.

David William Pear is an progressive columnist writing on economic, political and social issues. He is a regular columnist for The Real News Network, Op Ed News, and an editor for OEN. His articles have also appeared in Truth Out, Consortium News, Russia Insider, and other publications. He can be contacted at [email protected]