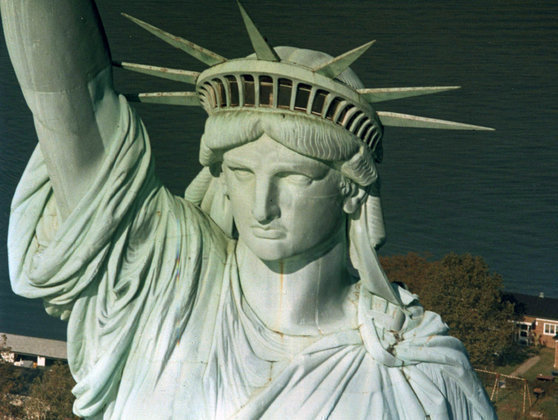 And so it came to pass that on the 1st month of the 20th day in the year of our Lord 2017, Emperor Twitteritus Trumparonious, born in the 6th month of the year of our Lord 1946, improbably snatched the reins of the glorious American Empire from Queen Hilliarious Clintoniosis whom the empire's military commanders, media propagandists, and many citizens hoped would rule over them. Queen Clintoniosis was guaranteed victory by all the most powerful soothsayers of the land and the court jesters of the day variously known as 'comedians and journalists.

So it is recorded.

The political philistines labeled Trumparonious a buffoon, sorely lacking the appropriate temperament and manners to govern the most powerful Empire the Solar System has ever seen. Trumparonious had emerged from the dingy swamps of New York City's real estate underworld, conniving his way to fame and fortune. The Emperor fell hard too. His fame and fortune crumbled under him and he loathed having to meekly appeal, through his legal counselors, to the powerful money changers for credit.

But alas! The Emperor arose from the ashes, denounced his naysayers and joyfully entertained the Empire's citizens through television shows making many millions aware of the Trumparonious brand prior to his divine run for the seat of the American Empire.

Little known to Queen Clintoniosis was that the Emperor was a master of the communications medium in all its forms and had many millions of followers who eagerly flocked to him. 'Experts' in the seats of power in Washington, DC, and New York City would come to decry these citizens as uncivilized and racist troglodytes who were best left to rot in West Virginia; Detroit and Flint, Michigan; and the baleful hinterlands of the Empire.

But, oh! Emperor Trumparonious came to the suffering in their hour of need and promised them rebirth and rejoicing if they would place their souls in his hands and elevate him to the throne. Those same souls had previously given themselves over to the Obamites, Busholites and to the Queen's husband, Emperor Billious.

And look! How Queen Clintoniosis, proconsuls, the rich and legions of the Empire did underestimate the Emperor Trumparonious. He now rules the land and the world!

And it came to pass that once on the throne, all of the Emperor's scurrilous  enemies and vengeful 'experts' came to kiss his feet and ring at his tower kingdom in New York City. See how they endear themselves to him now, to serve the one they mocked as a fool. Who, now, has the last word?

Look at his disciples! How pure they are! Disciples worth billions and millions and some of the finest former military commanders from the Empire's legions now follow, work for him. Nay, the wealthiest should govern, should they not? Is this now not the world of Plato on whom the Emperor is the expert? And see how the Emperor is troubled by Plato's 5 regimes. He seeks Oligarchy but knows that the benefits of Tyranny are many, particularly law and order.Would not Crassus of Rome rise from his grave if he could and praise the Emperor? Would not Crassus tell Emperor Trumapronious to turn on the disillusioned precariat of the land and crush them as he did to Spartacus and his minions?

The facts are these: The Emperor was born in the 6th month of the year in the 6th year of the 1940's. When in oration he moves his forefinger to the thumb making a circle with the other three digits in a vertical position revealing the 3rd six completing the beastly number 666. Further the Emperor was born on the 14th day of the 6th month of 1946, a day marked by a total lunar eclipse.

No one in the Empire dared utter the words, "The Emperor is the anti-Christ and his disciples the anti-Disciples." The foolhardy journalists who have questioned the Emperor's beliefs and judgement have come to a bitter end or have vanished.

And woe unto those who say that Putinious of Russia contributed to the Emperor's ascendancy! Look how the political philistines in the US Senate and House play their treacherous anti-Putinious game. A pox on their houses!The Emperor is wise, indeed. Hundreds of gold plated statues of the Roman God Jupiter now dot city parks and community centers around the land. In 2017, Trumparonious decreed that Jupiter should be the state religion as it was through much of the Roman Empire.  So it was written and so it was done.

But there were troubles and whispers of plots and conspiracies during the Emperor's rule. Perpetual wars and class, economic, and cultural fragmentation weighed on the minds of the citizens. But know this! The Emperor Trumparonious is studious and knows well of Caesar's end.

And it is said that someone with indestructible words caused the Emperor and his disciples to tremble in fear.
The one who said centuries ago, "Again I tell you, it is easier for a camel to go through the eye of a needle than for a rich person to enter the kingdom of God," returned.

It is not known how the Emperor fared and history flowed on.

John Stanton is a Virginia based writer