Saakashvili – Lost at Sea in Odessa 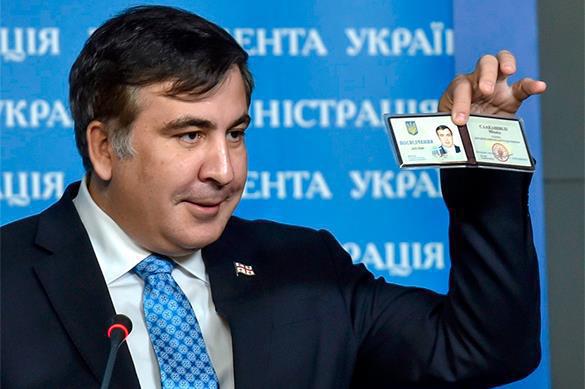 As he stood by Odessa's port, readying to deliver a resignation speech, as governor of Odessa, which would launch a broadside against Ukraine, Mikheil Saakashvili looked considerably older than his 48 years. He looked a very long way indeed from the once dashing figure, electrifying the global political scene with pledges to bring Georgia into the sphere of modern Europe.

In fact, he bore more than a passing resemblance to Michael Henchard, the main character in Thomas Hardy's 'Mayor of Casterbridge', worn down by successive failures, as he issues a weary 'I am to suffer, I perceive'.

Saakashvili prides himself on being an educated man, speaking five languages - but it's unknown if he's a fan of the work of titan of English literature, Thomas Hardy. If he were, he would have recognised his 18 month tenure as the governor of Odessa beset by the kind of foreboding background Hardy used to set the mood for tragedy to come. In October of 2015, coming on for six months of his reign, a civilian passenger boat capsized in Odessa, with the loss of at least 12 lives, the worst maritime disaster of its kind in post-Soviet Ukraine. Saakashvili rushed back from his trip to the western Ukrainian city of Lvov to be there, but there were already comments at that time that it would be better if he hadn't bothered.

Almost exactly a year later, in October of 2016, Odessa was lashed by extreme storms, leaving at least three dead, again, the worst of its kind in post-Soviet Ukraine. Meanwhile, Saakashvili's own time at the helm of Odessa lurched from crisis to disaster to catastrophe, before on Monday he walked the gangplank.

There may be not be an image quite as iconic as Saakashvili eating his tie upon realising he'd misjudged his South Ossettia military action of 2008, but his ill-fated time in Odessa leaves a legacy of embarrassments, memes, unfulfilled pledges, and the feeling that almost everything he touched there turned to failure.

His appointment on May 30th 2015, came somewhat out of the blue. Saakashvili had been an enthusiastic cheerdleader for Euromaidan, but in the aftermath of that, had actually moved to the USA, Williamsburg, Brooklyn. February of 2015 saw him called to Ukraine, initially sitting on a fairly inconsequential advisory panel for a couple of months at the start of the year, in April he turned down the chance to become First Vice Prime Minister of Ukraine, stating his unwillingness to rescind his Georgian passport to take up Ukrainian. But then May, suddenly everything had changed. The former close ally of George W. Bush was hurriedly rolled out a Ukrainian passport on May 29th, appointed governor of Odessa.

Tbilisi native Saakashvili was the first non-Ukrainian by birth to be named to head of what is in effect a provincial government. The post was made vacant largely because previous incumbent, Igor Palytsia, was an ally of oligarch Igor Kolomoisky, with whom Poroshenko had had a very public falling out, before effecting a purge of those loyal to him.

According to Poroshenko, his old friend (from university days) Saakashvili "has proven with deeds, not words that he can not only give birth to creative ideas, but also put them into practice." He added Georgia's ex-president had changed his country "in the direction of transparency, effectiveness, anti-corruption, appeal for foreign investors, fair justice, protection of citizen's rights, democracy," something Poroshenko "would like to see very much" in Odessa.

And so it was, the man who made a venomous hatred for Russia one of his calling cards, calling Russians 'barbarians', and personal vendetta against Putin 'I hate Putin', was appointed governor of a city in which pro-Russia demonstrations would easily outnumber pro-Ukrainian, before the brutal events of May 2nd 2014, the burning of Trade Union House with mass loss of life on side of pro-Russian protesters, and subsequent campaign of repression against them.

Saakashvili's appointment saw him posting an 'I heart Odessa' status on his Facebook, and indeed the US were so happy with the appointment they promptly offered to foot the bill for the salaries of Saakashvili and his team. In the city which was once considered the fourth city of the Russian empire, Saakashvili started out by making the obligatory big noises about plans to make Odessa the most powerful port in the Black Sea, and so forth.

Yet, the man known as 'Misha"s professed love was never reciprocated by locals - he met with a decidedly choppy response from Odessites, from the start, with the sea residents, famous for their laconic sense of humour, taking to hanging ties on landmarks around the city. July of 2015 saw anti-Maidan activists marching a goat through the city with placards declaring 'Saakashvili Go Home', and activists stating:' Activists continued their protest campaign a few days later, this time launching a giant red balloon featuring his image and the phrase 'Mishiko Go Home!', complete with a large red necktie dangling from his mouth. Then in August of 2015, an actual statue of Saakashvili, taking the role of dog to Obama's master, appeared on the city's iconic Primorsky Boulevard.

Meanwhile, on the more serious side, reports emerged of Saakashvili, along with being wanted by his own country's prosecutors for embezzlement, abuse of power and politically-motivated attacks, also wanted for murder in Georgia.  Things only got worse with the appointment of his team, a self-consciously 'star-studded' line-up looking more akin to the judging panel on a tv talent show than those capable of managing a port-and-resort city of 1 million which had derived much of its former prosperity from hundreds of thousands of yearly Russian visitors.

The appointment of Maria Gaidar as deputy governor, a glamorous, young Russian opposition figure, was one Saakashvili likely thought would be a hit. He even stated she was ready to rescind her Russian citizenship, and apply for Ukrainian. However she fell at the first hurdle, when refusing to say that Ukraine was at war with Russia in interview, attracting the ire of Ukraine's media, and Euromaidan supporters who had trumpeted Saakashvili's appointment as a triumph. Ukrainian parliament member and former deputy governor of Dnepropetrovsk Borys Filatov, famous for his "we will hang the scum" line regarding Crimeans seeking independence from Ukraine, responded harshly to Gaidar's stance

"They simply don't give a **** about our country. They are making money here. Or are fulfilling their sick ambitions. Or are training themselves 'on cats.' Choose the option for their motivation yourself," Filatov posted on Facebook.

Then there was Saakashvili's obsession with Yulia Marushevska- activist and aspiring actress best known for her part in Euromaidan promotional video 'I am a Ukrainian' in February of 2014. She spent most of her time after that appearing on chat shows speaking about that, until Saakashvili seemingly spotted her political potential, making her third in command in his team. It's unclear what she did in her months in this job, but in any case, in October of 2015, Saakashvili promoted her to Customs Chief for Odessa, in charge of the biggest port insert.

Saakashvili's other appointment to deputy,  Afghan war hero Vladimir Zhmak, also had no experience in civil service, something an enthusiastic Saakashvili saw as a plus, posting on his Facebook that their lack of experience was a good thing because my goal is to bring new, fresh, uncorrupted, competent people."

What happened? Gaidar's tenure was an unmitigated disaster, alienating even those who had supported Saakashvili, with her backing out of taking Ukrainian citizenship, resigning in a hail of protest in May of 2016.  Zhmak signed off in July of 2016 with a cheerful 'Goodbye Odessa' message on his Facebook. Marushevska has proved incompetent spilling into inept in her role as customs chief, embroiled in endless internecine conflict, with Odessa's port practices stuck in the past, and revenues actually decreasing by 30 percent, while in Ukraine as a whole, revenues were reported as up 21 percent. Marushevska is now reported to be considering her own position.

What were Saakashvili's other big ideas for reform? Fire everyone, call them all 'useless', employ new and untested people. Unfortunately for Saakashvili, his new people turned out to be just as, if not more 'useless' than their predecessors, and he failed in making any headway in his 'war against corruption'.

Initial, PR-winning stunts, such as his taking public transport to 'touch base with locals', petered out. By October of 2015, locals who'd opened precious wine in honour of his appointment were beating a path to his door to berate him. And after his candidate for mayor, Alexander Borovyk, was defeated, by Gennadiy Trukhanov (who Saakashvili had frequently, publicly slated), in October of 2015, Saakashvili largely withdrew from the Odessa scene.

Meanwhile things had quickly unravelled for Saakashvili with other government figures. In December of 2015, at a government meeting, he got into a heated argument with interior minister Arsen Avakov, that ended with Avakov throwing a glass of water at Saakashvili, who retorted that Avakov was a "thief" who would go to prison. Avakov later described Saakashvili as a "bonkers populist"

Even a western media inclined to be more than benevolent to Saakashvili had long changed their tune on him, by the time of his resignation. Polish press were writing in February of 2016, that 'His work so far has failed to bring any spectacular successes in any of the priority areas of activity.' This article in Foreign Policy, from October 2016, painted a prophetic pictured of a man defeated. The Ukrainian press were stronger still, a Ukrainian writing in October of 2015 that Saakashvili was 'dull' and 'stank'.

The writing was on the line in May of this year, when Saakashvili gave an interview to Shaun Walker of the Guardian, calling Ukraine's government a 'bunch of mediocre people', with 'no vision for reform', and openly criticising his former ally, Poroshenko. The article predictably made waves, causing Saakashvili to issue a statement that Walker, his 'longtime friend', had 'clearly perverted' their conversation. Walker, however, stuck by his article, with dictaphone recording to back it up.

Much of what Saakashvili said in his resignation, blasting the Kiev government, singling out President Petro Poroshenko, saying he had been complicit in obstructing various reforms, had clearly well fomented when he spoke with Walker in May. But the vitriol had only increased with the passing of months, as he blasted: '"What difference for Ukrainians does it make who will treat them like dirt: Poroshenko or Yanukovych; what difference who will steal from them?"'

Having made some effort to speak Ukrainian during his tenure, Saakashvili reverted to the Russian he knows better for his signing-off salvo. Saakashvili's taking on the role in Odessa was largely motivated by his desire to escalate his personal (somewhat one-sided) battle with Putin. He leaves the post, with harsher words about the man who employed him, Poroshenko. He leaves with almost all of his much-vaunted reforms, and project, having ignominiously failed. As Walker wrote 'The sad demise of Saakashvili and his bold new vision'. He wrote that in 2008. Time moves on, but Saakashvili's 'bold new visions' always seem to end the same way.

And so it is, like Michael Henchard, after another failure, Saakashvili sets off again.