Hillary Clinton fell on her own sword 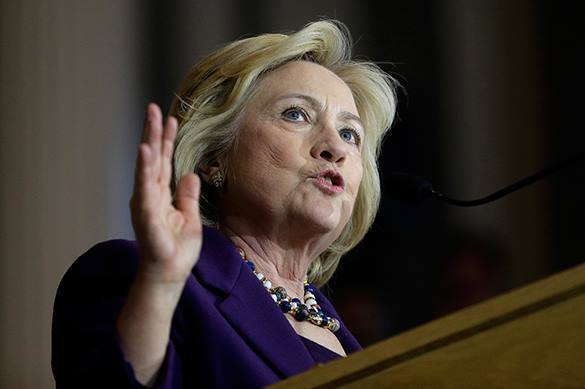 Although there are protests throughout America decrying the election of Donald Trump as the new, US President-elect the world should be thankful that it was not Hillary Clinton. Had she been elected, it is highly likely that the world would soon be engaged in WWIII.

The Clintons represent the 'old establishment' and the US electorate has finally had their fill of Washington regulars, their constant war-mongering, their threats, and their never-ending desire to make this world its own oyster. As a result, the backlash against Hillary combined with many negative, personal factors to defeat her life-long ambition of becoming the first, female US President and half of the first husband-wife team of presidents.

The Clintons have many skeletons in their closets which they would rather have others (particularly voters) never hear about. One of Hillary's many skeletons was portrayed in a novel entitled, 'Primary Colors' by Anonymous (author Ed Klein), which alleged that on many occasions she physically assaulted her husband, Bill, and is allegedly a 'spouse beater'. This was supposedly based on witness accounts. The alleged assaults took place after revelations of his many escapades with other women and young ladies.

As President, Bill Clinton, further sullied the Clinton name by his impeachment which followed his sordid sexual activities with intern Monica Lewinsky and which occurred in the White House during his tenure there. After he left the White House, stories of Bill Clinton's sexual promiscuity continued to circulate, fill the tabloids, and haunt the family.

Hillary Clinton's email scandal dogged her throughout the entire campaign and may still lead to her prosecution, if not pardoned by President Obama before he departs office on January 20th, 2017. Her careless use of a private email server for classified, government documents and information may have contravened federal law and leaked valuable information to unfriendly, foreign governments.

Recent investigations into the Clinton Foundation, formed after Bill Clinton left the White House, have revealed that it has not only enriched the disaffected of the world - according to its mandate - but has also enriched the Clintons themselves by tens of millions of dollars.

The most recent revelation from Wikileaks that Chelsea Clinton used money from the Clinton Foundation to pay for part of her extravagant wedding has firmly tarnished the family name from top to bottom and projected its image as one which is thoroughly corrupt, and contemptible.

Had Hillary Clinton been elected as the next US President, the world would almost surely soon be thrust into World War III with its unfortunate end-result for the inhabitants of this planet. Hillary's hatred toward men - especially men like Vladimir Putin with power and authority - represents everything she hates in this world. And, as a representative of the tired, old, Washington establishment hell bent on American, global hegemony, Hillary Clinton would most certainly push Putin's Russia into a nuclear war just to prove her point, to 'save face', and to maintain the US self-image as 'the' world authority in all aspects of life on this planet. This authority, of course, would be backed up the military might of the United States with herself being the Commander-in-Chief.

Hillary's unwillingness to accept opposing views - especially those of a man - was shown toward her Republican adversary, Donald Trump, throughout the presidential campaign. Her constant, smirky, condescending manner toward Mr. Trump produced in her a false belief that her 'superiority', experience and expertise in foreign affairs were sufficient evidence to all Americans that she was the 'only choice' and 'right choice' for America.

Today, in the streets of America, protestors are not only protesting against Donald Trump's victory but unwittingly against the basis tenets of democracy which they supposedly espouse. Having a new, President-elect - selected by the people - has badly divided Americans instead of uniting them.

With all polls prior to the election showing a clear and decisive victory for Hillary, pollsters did not foresee the determination of the 'silent majority', the power of the secret ballot, and the many 'closet supporters' of Donald Trump who are also highly dissatisfied with the direction America is taking.

The American people have spoken, and it was not in favour of Hillary.