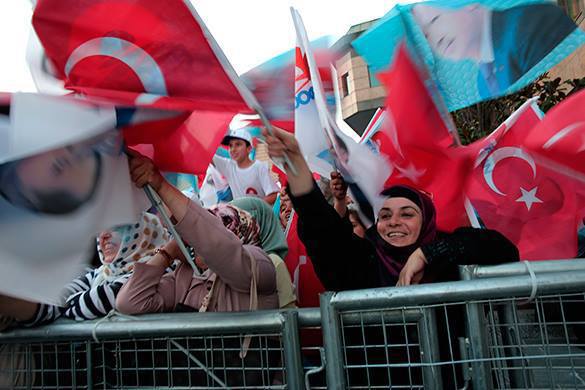 July 15th began like any other ordinary Friday but turned out to be a bitter experience for the Turkish nation as a minority group that had infiltrated the Turkish Armed Forces attempted a coup to overthrow the elected government. I can honestly say it was a dark night for Turkey but the courageous Turkish people turned it into a bright and sunny morning for our country. The Turkish people witnessed unpredictable atrocities they have never thought possible; tanks ran over civilians, helicopters fired on people, the Turkish Assembly was bombed and unarmed people were shot in the head while trying to rescue the wounded. Turkish soldiers would never partake in such wickedness; it was the work of a small fraction of traitors that infiltrated the Turkish Army.

Coups have always paralyzed our country in history

As Turkish citizens who have experienced numerous coups, memorandums, and post-modern coups, we know perfectly well that they are always doomed to failure. It would be fair to note that some foreign circles have played roles in these attempt in history. For instance, the British Deep State has always endeavored to rule the world and historically, it has indeed taken control of all the countries in the world save only twenty-two. As a policy, they aimed to take control of lands that they thought to be beneficial either in terms of strategy, or oil reserves or trade opportunities. If they do not succeed in this undertaking, their Plan B is to cause strife in that certain country and make the region unstable. As a result of this tradition, when disorder occurs in a region the deep states would like to take control of, they immediately take measures to support the local army. Just like in this last coup attempt, the British Deep State has had a hand in coups in Turkish history including the ones during the time of the Ottomans where twelve out of thirty-six sultans were overthrown by military coups. Therefore, we will never allow plotters take control of our nation anymore.

How the Turkish nation united during that night

That night, the Turkish nation was united and showed a single stance. Turkish people were on guard every night  for an entire month  following the failed coup attempt and on August 7th, Turkey held a rally of unity in which - in Istanbul alone- more than five million people attended acting as a single spirit. The leaders of the three main political parties of Turkey and the Commander of the Turkish Armed Forces were present in the rally, as well. The rally started with a recital of the Qur'an and followed with standing in silence and prayers for those 240 people who were martyred during the attempt. No party flags were waves nor political slogans were shouted. It was a rally of love, unity and brotherhood.

Who denounced this failed coup attempt in Turkey?

In point of fact, Turkey did not receive any satisfactory support from countries considered to be its close allies, especially from the West. On the other hand, President Putin and President Rouhani made phone calls to President Erdogan to show their support against the coup attempt. It was encouraging for Turkey to hear positive messages from its neighbors whom Turkey sees as close friends. True friends show themselves during times of hardship and these gestures will never be forgotten. Iran's top diplomat, Javad Zarif, called his counterpart, Turkish FM Mevlut Cavusoglu, several times during the night of the coup attempt; as all of Turkey was awake that night, so was Mr. Zarif to indicate his support to the Turkish nation. Their quick reaction and condemnation of the attempt, is something only true friends and true brothers would do for one another and Turkey will always appreciate this beautiful deed.

There was  a very intense series of meetings for Turkey following the failed coup attempt in regards to the new links with the Russian Federation and Iran. First, the Prime Minister of Georgia and then the President of Kazakhstan came to Turkey, then President Erdogan made his historic visit to St. Petersburg to meet with President Putin for the first time after the plane crisis at the end of last year. Prior to this meeting, President Putin had a meeting in Baku with President Rouhani and President Aliyev. Foreign Minister Zarif was the first politician from Iran to make an official visit to Turkey after the failed coup attempt; the timing of this visit was significant. It is again an important sign from Iran in backing up Turkey, which is going through these difficult days. Many of the western journalists and analysts viewed these two meetings with Russia and Iran as a shift in Turkey's foreign policy given the insufficient show of support from the West. The meetings were not limited to these alone and Foreign Minister Cavusoglu paid a surprise visit to Tehran after one week. Additionally, President Putin and President Erdogan met in China on September 5th during the G20 summit. We have started to see the positive consequences of these official meetings quite swiftly.

The cooperation of Turkey, Russia and Iran will make a major effect in the region

The rapprochement between Iran, Turkey and Russia, particularly after the failed coup attempt in Turkey, is a major gain for not only these countries, but also for the region.  Turkey, Russia and Iran will continue be allies just like in the past. Indeed, soon Turkey, Iran and Russia officials will hold a meeting in Baku as a sign of their approval in this alliance on all sides.

The Caspian Sea region is homeland to a majority of Muslims other than the Middle East or North Africa. It is considered to be a buffer zone between the West and the East and Russia and Azerbaijan are strong allies establishing the stability in the region. Russia has attained a deep-rooted place in the Middle East throughout the years and strives for ensuring integrity of Iraq and Syria.

There are also many economic and trade issues and energy projects both countries seek to undertake in the near future, which I will deal with in another article. However, above all else, what matters most is the unity between two nations. Showing that they are on each other's side when the other is in need is a great sign of loyalty: Unity means strength, unity means brotherhood, unity means friendship. Despite the horrible consequences and the wounds it inflicted, the coup attempt has brought with it a pleasant outcome: Unity.