Things you are curious about regarding the coup attempt in Turkey 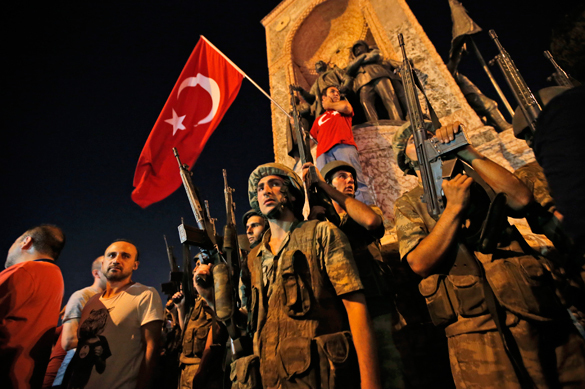 July 15, 2016 was a historic day for Turkey. A minority group that infiltrated the Turkish army attempted a coup to overthrow the elected government. Coups always bring pain and suffering; however this coup showcased a level of tyranny that is almost incomprehensible. Turkish people witnessed unimaginable atrocities they have never seen before. Tanks ran over civilians, helicopters fired at people, the Turkish Assembly was bombed and unarmed people were shot in the head. This was a monstrosity that Turkish soldiers would never partake in. It was the work of a small group of traitors that permeated the Turkish Armed Forces. Our army is a very sacred organization, and is the pride of our nation. Turkish soldiers would never point their guns at their own people, or side with tyranny or coup plotters. Our people repelled this attack in unity with our police and soldiers and foiled the plot against our country.

On that night, our people made every effort to keep their democracy alive and our people were victorious. However, some in the Western media did not give accurate information regarding the coup attempt let alone support the innocent Turkish citizens risking their lives in their endeavors against this tyranny. Therefore, my goal here is to give accurate information with regards to the events that people outside Turkey might wonder about. This would be the most befitting step to take for those who would like the opportunity to understand the real events in Turkey before passing any judgments.

What Turkish people think their future will be like

Turkish citizens have been on patriotic duty for eleven nights in hundreds of squares around country with Turkish flags in their hands regardless of ethnicities, faith, and political views. This shows that in the future the Turkish nation will be striving more consciously to protect its unitary structure and to better its relations with neighboring countries to form a unity. Our aim is to have a more modern and  high quality Turkey. As we are approaching to form a new huge bloc consisting of Russia and Turkic countries, the solidarity and compassion of Islamic understanding will be leading this strategy. Beauty, secularism, modernity, aesthetics, art, and science will prevail amongst all nations to help them overcome the obstacles they might face in the process of forming this structure. Such communities tend to be more progressive, avoiding hateful rhetoric and policies while respecting the opinions of everyone.

This coup attempt drew the Turkish nation closer; brotherhood and solidarity increased and a compromising culture and attitude carried the day. All the political parties that once used to debate with vastly different opinions and ideas, for the first time after a long period started to take joint actions against this attempt. The summit President Erdogan held by inviting all the political party leaders can be considered a symbol of democracy and a spirit of reconciliation. I'm proud to say that they are very likely to continue to work on the same side for the sake of our bold nation. Our nation is like a well-built wall, standing against any kind of threat for the welfare and preservation of our country.

How Turkish people consider the actions of President Erdogan

A president elected by its people is to respect the choice of the people; that is a fundamental principle of democracy. The Turkish nation realized that these coup plotters disrespected their own choice and embraced the democratically elected president and the government. President Erdogan is a modest and moral person. Whoever he is confronted with, whether a coup plotter or any other with ill intentions, he is persistent in his stance to protect his country and his people and fears nobody but God. This has been a severe test for him as well and he took up his position with dignity. When we take into consideration previous coups in Turkey, we notice vastly different unwanted scenarios. During this attempt President Erdogan used strong language to indicate his strong stance to protect the national will and unitary structure of our country.

Considering the new evidence obtained through investigations regarding this coup, the coup plotters that infiltrated the army had a thorough plan that had been a part of their agenda for a long time. In terms of human psychology, people are generally prone to feeling bored or dissatisfied with the status quo. This psychology is also present with regards to how people might feel about governments.  They might be quick to blame the government when they feel that certain issues are not being addressed or in their favor. Governments themselves also wear down over time. Considering that AK Party has been in power for fifteen years, the coup plotters might have foreseen a plan to topple the government by imagining that they would make alliances with the people:  This has been the model in other parts of the world. The coup plotters thought they would find support from the people because people are usually in search of a change in order to better their economic situation. However, they fell short of considering the patriotic characteristic of our valuable people and their devotion to democracy and the plots backfired since the entire Turkish nation resisted altogether and foiled this attempt.

Why most Western countries did not denounce the coup attempt

It was US Secretary of State John Kerry who was the first to comment on the coup attempt in Turkey by saying, "I hope there will be stability and peace and continuity within Turkey." This was not a satisfactory statement of denouncement by a country considered to be a close ally of Turkey when the people were facing such an enormous challenge. It is interesting and somewhat obtuse that condemnation messages from the US authorities came after the coup attempt was thwarted. Many people and some journalists analyzed it as if they were expecting to hear some victorious news on how the coup plotters succeeded in their agenda and that the inevitable change happened. In a joint press conference Kerry and EU High Representative Mogherini warned Turkey to be respectful vis a vis democracy, human rights, and fundamental freedoms. They also notified Turkey of its exit from NATO and how Turkey could also endanger the process of becoming an EU member should they not be compliant with the requirements of these institutions. These were not the initial statements Turkey was expecting to hear from countries it considers as its solid partners and friends during a difficult time.  As an alternative, if Turkey acts together with Russia and Iran, it will have broad opportunities to make significant moves regarding Syria, energy policies, the Black Sea security policies, and the Straits policies.

A big test for the Turks

Consequently, this has been a big test for Turkey and the Turkish people succeeded. They have shown their solidarity as one body to the entire world to foil this ugly occurrence. People from all demographics whether they are religious, secularists, Kurds, Turks, Arabs, Sunnis, Shias or Alawites, risked their lives and used their bodies as shields to protect their democracy and freedom. This is the time for us to act in unity and never allow any tyrant to take democracy away from this nation.