Way back in the 50s (even before then), from Truman on up to Ronald Reagan, 'godless communism' and its domino effect was every U.S. administration's avowed public enemy numero uno. How ironic! The times certainly have changed. Worldwide, there are only a handful of dye-in-the wool 'true' communist regimes left to bully. 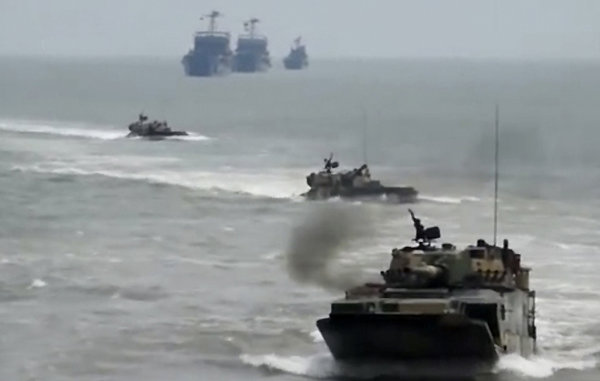 Even little Cuba, the communist isle parked at America's doorstep alongside the Florida Keys, is now having cordial relations with the White House. Not all Cubanos were pleased. One in particular, the Big Daddy of the Revolution lashed out. When he was not verbally lambasting the disingenuous Obama on State TV, Fidel Castro tirelessly scribbled his budding angst. In many op-ed diatribes the nearly 90 year old arch nemesis excoriated the 'lame duck' American president at will.

Farther afield, in the Middle East, America no longer fears communism; not in the least. Its military-industrial complex has starvation concerns. Those consumption worries have nothing to do with food either; but it has everything to do with energy. They fear being squeezed out of the cheap supply source for Arab and Persian oil. That and the impending collapse of the U.S dollar as the world's reserve currency were prime enough motivators for Washington to go to work overseas in the Middle East.

Without provocation the Pentagon chicken hawks set in motion their regime change war game plans. Starting in the 1990's with Iraq's Saddam Hussein, legitimate heads of state were deposed. Reason: America, ahem, the U.N. adjudged them to be despots. Libya fell next in line at the new millennium's start. Colonel Muamar Gaddafi had to go. It mattered little that the sovereign leader was hunted across the dunes like a desert rat. When captured, the Libyan Colonel was summarily murdered. His cold hearted killers spilt his innocent blood on the hot sands without a hint of moral compunction. Their orders were never to arrest him for trial.

DOA meant just that: dead on arrival; not dead or alive. The world must not forget: Gaddafi posed no threat to anyone. Now the global (America) elite have targeted Syria's President Bashar al-Assad for elimination. He, like Hussein and Gaddafi before him, is not cooperating with the American hegemony's grand scheme: spread 'real' democracy to the tribal lands. If color revolutions fail to bring the desired results, then resort to Plan B: intervention through war even while diplomatic back channels are espoused as getting underway. Then after the 'shock and awe' blitzkrieg assault America and/or its surrogates are primed and ready to launch Phase II: 'win the hearts and the minds' of the captive peoples during the armed occupation period. What America did not figure in was the fact that not everyone agreed with its worldwide democracy spreading crusade. Assad had friends; powerful ones in the Kremlin.

He could count on Russia's courageous President Vladimir Putin. With his successful and timely rescue by aerial bombardment of Syria's rebel factions including ISIS in the north, President Putin laid to rest any aspirations that ousting Assad was going to be anything but a cakewalk. Putin was wiser. Russia too was targeted by America. However, President Putin and Russian people are not going to lie-down. Resolute of mind and spirit, together they are one tough domino; they are every bit solid as granite. Dynamo is a better word. U.S. Once riled, the Russian military armature can be tightly wound until the energy harnessed is sufficient to crush the enemy.

What a colossal shame and utter disaster if America and its proxy vassals in NATO were foolish enough to test the efficacy of the Russian stand on principle and thus safeguard their sovereignty. The U.S. mischief was not confined to the Middle East. Europe was another playground for their proxy wars; a rich prize that America could not let escape from its clutching hegemonic tentacles. The armed coup in Ukraine was their conduit to draw closer to Russia; to within a stone's throw or missile launch away. Now Rumania has cooperated (was coerced). With the installation of the U.S. Aegis missile defense system, America conned another poodle; one willing to sacrifice its own security by acting as a bridgehead when the U.S. chicken hawks decide to launch an attack on the Russian Federation. South America too is succumbing to suffocation by economic strangulation as U.S. hegemony expands there. First the oligarch U.S. hedge fund criminals file the paperwork. Using financial chicanery these white collar criminals deprive the legitimate states of their own capital. Then without legal recourse the defendants are forced to surrender their natural resources. Argentina, Venezuela, Chile and now even the once solvent Brazil have all fallen victim to the IMF 'approved' lending practices.

South Africa too has been hoodwinked. The corrupt leaders take bribes from any source that gives legitimacy to their state villainy. America has obliged. In time the lenders will have extracted a hefty profit. For posterity, the U.S. hegemony and its game of dominoes show no signs of abating; this is especially true if clueless crook Clinton is elected. All seven continents are infected. Big or small no country is safe. Just ask China. A Donald Trump Presidency could slow things down; that all depends on Congress; if they will implement his 'America First' policies. Hope stops there though. Makes you wonder who the communists really are.