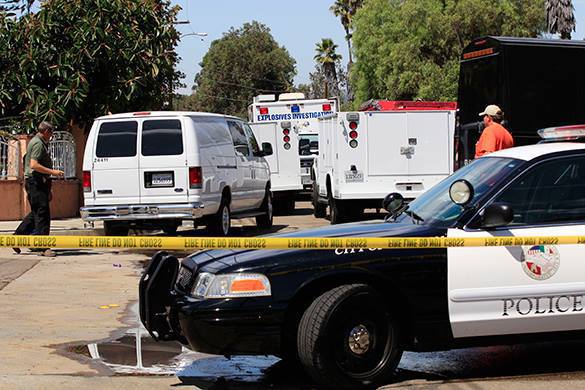 The police routinely do surveillance on suspects. We all know that.

The New York Times featured an article on June 10th, 2016 titled "United States of Paranoia: They See Gangs of Stalkers" which casts doubts on whether gangs could commit crimes like stalking, harassing (and worse) against targeted individuals (TI's) and repeatedly tries to plant seeds of doubt that TI's may be mentally ill, delusional or psychotic.

We don't know how many people are suspects because the police won't comment on ongoing cases. Ditto for Federal law enforcement and intelligence agencies. Dr. John Hall, a documentary film maker, author and expert on gang stalking, estimates that hundreds of thousands of Americans are currently being targeted, gang stalked and worse.

We don't know how the police or Federal agencies do surveillance on people because they won't say how they do surveillance. On occasion, there is news about people who were indicted that reveals surveillance went on for years, that undercover officers masqueraded as underage girls online or as sexy young adults preying on lonely (or excitable) young men. Undercover officers pretending to be religious, frequenting Mosques, asking nosy questions, offering freebies all around, free food, free drinks, free cash, free vans, free weapons to religious people, who pray often, yet live in economically cratering parts of the US.

There's Congressional testimony from intelligence agency personnel about "dark arts" and "honey traps." The specifics on how exactly they do surveillance (aka their "dark arts") on suspects is sketchy at best.

TI's describe being gang stalked, harassed, many times a day every day, abused, terrorized, brutalized, tortured and many TI's memorialize other TI's who were killed. Descriptions get graphic and detailed, some with a unique vocabulary like "directed conversations," "gas lighting," "mobbing," "street theater," "man in the middle attacks," "sleep deprivation torture" and so forth.

"Mobbing" is often at work when several co-workers have agreed to become police informants (snitches) and they mob, surround and simultaneously bully a co-worker creating a hostile work environment. Some TI websites and groups mention mobbing in other contexts like stores or in public, suspects get enveloped by a swarm of irritating and menacing undercover officers (or informants).

One suspect from New York reported being menaced by pit bulls. When he left home in the morning, there would be 3 pit bull owners, chatting with each other, with their pit bulls blocking the front door. Followed by the subway entrance being blocked by 3 other pit bull owners with their pit bulls. Followed by horribly disfigured people getting onto the same subway car at the next stop, with handlers, then loudly describing the pit bull attacks that left them so disfigured. Then, the subway exit being blocked by 3 pit bull owners with pit bulls and so forth.

Street theater is when police bosses plan out skits for undercover officers (or informants) to act out in front of suspects. One suspect reported about several such skits. For example, a couple of undercover officers, one with a camera, the other with chalk drawing outlines like of corpses on the sidewalk while his partner snapped photos with flashes of the chalk outlines. PsyOp is synonymous with street theater.

Sleep deprivation torture is undercover officers (or informants) making loud noises all night, so that suspects cannot sleep. Often the loud noises come from a nearby home, rented by the police to do surveillance, like loud music all night long. Other loud noises described by suspects include loud TV's, prolonged chain sawing, power drilling, jack hammering and the like.

Some suspects report intensive sexual harassment and assaults. One suspect in New York reported years of more than 50 prostitutes a day stalking, harassing, assaulting and at times, attempting to rape. None of the prostitutes wanted money from their target. It's widely known in Manhattan that certain Federal agencies have stables of prostitutes on their payroll because of the United Nations and Wall Street (and apparently for some suspects too).

For some, being harassed (assaulted, etc.) by so many prostitutes every day might sound hot. Pick the ones you want, or pick all of them for sex, for free.

How long? One "suspect" reported being under "surveillance" for over 50 years. Long story short, his mother was some sort of Fed tasked with seducing a foreign leader (known for promiscuity) and getting pregnant. She succeeded and came back to Manhattan. 9 months later, she delivered at New York Presbyterian Hospital. The agency arranged an adoption and the natural mother got her $1 million in cash. (Moments later, outside the hospital, she was robbed and murdered.)

Anyway, the child was adopted by undercover officers, raised in a wealthy suburb on a block where many other undercover officers lived. He's been under 24/7 "surveillance" throughout his childhood, teens, young adulthood and middle age years to present. Other targeted individuals (suspects) routinely report having been under surveillance for decades.

Gloria Naylor, an award winning author, reports in her book "1996" how a spat with a well connected neighbor led to her being declared a "suspect" and being put under intensive "surveillance" complete with harassment, stalking by surveillance teams, psychological abuse and torture, sabotage to personal belongings, loud noises, sleep deprivation torture, being threatened, menaced and terrorized 24/7/365 and worse.

The police and Feds absolutely refuse to provide data on how many suspects are guilty and how many are innocent.

Widely published data reported that over 90% of the suspects incarcerated at Guantanamo were innocent of any crimes. They were imprisoned, without trial, tortured for years, then released. Because they're innocent.

The Feds still refuse to apologize to the innocent people they falsely imprisoned and tortured for years at the Guantanamo torture camp as surely as the Feds still continue their lingering military occupation of Occupied Guantanamo Bay, Cuba.

It was also widely reported that the Feds murdered some of the innocent suspects at Guantanamo, then tried (unsuccessfully) to make their murders look like suicides. It's still unknown, however, how many innocent suspects under surveillance the police and Feds have murdered. Some TI websites report names and other facts about targets (suspects) who died under suspicious circumstances.

The practice of placing suspects under surveillance has increased throughout the history of the United States. The biggest increase has been 2001 to present.

There are too many unanswered questions about surveillance of suspects. Inquiries can be done by County Legislatures, City Councils, State Assemblies, Congress and investigative journalists to reveal how suspects are picked, how long are suspects put under surveillance, how exactly is surveillance done and how many suspects are found to be innocent (e.g. 90%, 95%).

Suspects (targeted individuals) have reported that surveillance teams have broken laws, committed misdemeanors, felonies, civil rights violations, human rights violations and crimes against humanity. Reports of serious crimes should be investigated. The people who do surveillance should be well policed. Anyone doing surveillance who has committed crimes needs to be held accountable: investigated, arrested, tried, convicted and imprisoned for their crimes.

A step forward in fighting such abuses and crimes is increasing accountability, oversight, audits and placing effective checks and balances on police and the Feds. One small step forward would be hearings at local, state and federal levels on the scope and extent of the problem.

If more than 90% of suspects are innocent of any crimes and large numbers of people have been labeled suspects and put under surveillance for decades, then discussion in the press, County Legislatures, City Councils, State Assemblies, Congress and the media-at-large needs to also turn to how these "suspects" can be apologized to and how can they be compensated for what was done to them.

It's a truism that everyone is a potential criminal just as everyone is a potential terrorist. Yourself included. You are no longer innocent until proven guilty in the USA. You are guilty until proven innocent (and that could take decades, or a lifetime, or longer). If you see nothing, hear nothing, say nothing and do nothing while the number of "suspects" rises from tens of thousands to hundreds of thousands to millions, then who is going to speak up or do anything for you when you become a "suspect" and get put under 24/7 "surveillance" for years? Or decades. Or the rest of your life.