Should Russia Worry Over a Fourth Reich?

Something has tipped the balance. News from Berlin that Germany will be a geo-strategic competitor with Russia, rather than a partner, has Moscow and other capitals to the east worried. According to the news, an upcoming government security policy guidebook in pre-publication by the German Defense Ministry, singles out Russia as one of 10 major challenges for the central European nation. The report from Die Welt tells of the document casting Russia in a similar light with terrorism and event the refugee crisis.

In what is seen as a major downgrade of Germany's policy toward Russia, the newly discovered document is a dramatic shift in detente. The paper puts Russia in the same policy basket as right wing extremism, international terrorism, the refugee situation, cyber-attacks, and even climate change. The dogma of these documents is damning, for anyone with a moderate bone in their body. According to Germany's top political newspaper, the document authors condemn Russia for; "hybrid instruments to blur the boundaries between war and peace" and"undermine other states", and essentially "militarizing" social and other media. The wording of the German news magazine report is more concise, the Germans are most afraid of, "the pursuit of power by the Russian President Vladimir Putin."

These allegations are dangerously close to the line where freedoms are concerned. The wording of official policy skirting freedom of media and thought, cannot be underestimated here. According to the report from RT, the White Paper in question was leaked earlier, and contained provisions allowing German armed forces to be a part of a so-called "Pan-European Military Force", a move many chided as a "Merkel Army" or Fourth Reich. Billed as a replacement for NATO, this theorized force has only two logical opponents. In police mode, the refugee situation is ostensibly one foe. Russia, of course, would be the other mainline threat to such a European army. That is, of course, unless Berlin has broader military ambitions.

But what's ominous about these documents has little to do with a new militarism in Europe. The paper targets not only Russian media, but pro-Russian ideas. The vague language of Die Welt, is not really so vague:

"As a special challenge is the use of digital communication to influence public opinion, including the realms of the unknown targeted control of discussions in social networks, and the Manipulation of information on news portals."

The strategy paper proposes giveing the Federal Security Council (BSR) expanded powers and responsibilities, which has caused many experts to warn of Germany once again becoming a "police state". The documents pointedly extend the reach of the Bundeswehr [Armed Forces], as well as the Ministry of Defense of Germany. The premises of this document have been under study and scruting at the government level for many months now. This document entitlled; "New power, new responsibility: Elements of a German foreign and security policy for a changing world," was published after deliberations by 50 leading politicians, journalists, academics and military and business figures mulled over what Germany's forthcoming roles should be. The group discussed a more aggressive German foreign policy alongside the government-aligned Stiftung Wissenschaft und Politik (SWP, German Institute for International and Security Affairs) and the Washington-based think tank German Marshall Fund (GMF). Reading that document, factoring in what we've learned from Die Welt, it's not hard to form the conclusion that German leadership has been bent on more conflict, rather than less, and for some time. The chart below reflects how serious Germany's leadership's views are. As you can see, Russia is drifting far left as a strategic partner, somewhere east of Vietnam, and other nations labeled "challengers" to Germany. 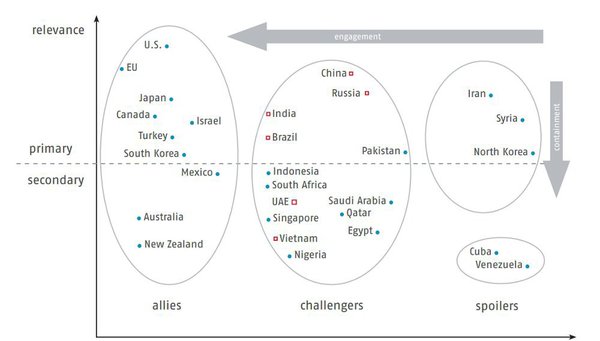 Furthermore, the reach of this study indicates not only a German reach toward regional control and/or militarism, but a global one as well. Note the "spoilers" group consisting of nations far moved geo-strategically from Germany. Another disturbing aspect of these documents is the suggestion of a "new order" of things, referred to several times as a "liberal order". Given what we have seen from western leadership over the last decade, this aspect is grave indeed. Quoting from the document concerning German competition:

"Inevitably, this will lead to competition and conflicts in Germany's relations with the new economic and political power centers of the world: struggles about influence, and access to resources, but also about the architecture of the international order as well as the validity of the norms on which it is based. It is in Germany's interest to ensure that they are directed into peaceful channels. This will require an adaptation of the international order, which currently still reflects the post-war distribution of power. The new powerswill have to be appropriately represented there - if only to prevent the formation of new blocks which might challenge the liberal order (the beginnings of which can already be seen). In this process, some challenger states could become real partners for Germany, but it is also conceivable that some will opt for confrontation. Here, Germany will have to combine engagement and containment in concert with other like-minded states."

The only point of divergence from these two separate studies is the recommendation from the latter that Germany remain a partner in NATO. Of course, this is largely due to the nature of the institution performing the latter study, but the wider implications of longstanding strategy planning along these lines is clear. German leadership's intentions should now be called into question, for any of the following reasons:

These and many more questions present themselves. Mrs. Merkel, her colleagues in government, the media in Germany, business, and especially the NGOs seem to collaborate in ways unheard of two decades ago. With Germany now in sharp focus, many are considering just why Merkel invited the hundreds of thousands of refugees into her country, only to turn up the heat on them by passage of the new "Integration Law", which regulates the refugees' rights and responsibilities? In the extreme, it would seem the west has created a pressure cooker aimed at a redux of 1930s ultra nationalism. Maybe this is a stretch, but creating a common enemy like Russia, amid an economic disaster, and adding in an internal threat paved the way for cataclysm before. Judging from the discussion by Ukrainian Ambassador to Germany, Andriy Melnyk about this "white paper" on the German Ministry of Defense's website, it appears Ukraine is adding a significant voice to the conversation.

In conclusion, like transatlantic partners to the west of Berlin the German leadership exhibits a flair for hypocrisy these days. I find it alarming that in the same meetings Merkel and her ministers discussed this new refugee integration law, the "digitalization" of society was also discussed. This report hints at the coming legislation to "govern" digital activities. Reciting a quote from a Wall Street Journal story we discover Mrs. Merkel has formed up a "task force" akin to government internet trolls (I guess) to hunt down transgressors. Facebook, in turn, seemingly offered to hire veritable bounty hunter organizations to keep tabs on social media. Here's the "task force" quote:

"German Justice Minister Heiko Maas said after a meeting with Facebook executives in Berlin that the ministry would coordinate the creation of a task force with Facebook and other Internet competitors to evaluate whether inappropriate content flagged by users falls under freedom of speech or is illegal under German law."

So now the reader can understand the concern many have over these developments. Underneath the public's scrutiny here in Germany, lawmakers and strategists plan and plan for the masses, sometimes in a Machiavellian way, policies with very long reaching and dramatic effects. I am reminded of this paragraph from the Nurembourg tribunal, whenever I think of European political tragedies:

"Why of course the people don't want war. Why should some poor slob on a farm want to risk his life in a war when the best he can get out of it is to come back to his farm in one piece? Naturally the common people don't want war neither in Russia, nor in England, nor for that matter in Germany. That is understood. But, after all, it is the leaders of the country who determine the policy and it is always a simple matter to drag the people along, whether it is a democracy, or a fascist dictatorship, or a parliament, or a communist dictatorship. Voice or no voice, the people can always be brought to the bidding of the leaders. That is easy. All you have to do is tell them they are being attacked, and denounce the peacemakers for lack of patriotism and exposing the country to danger. It works the same in any country." - Hermann Göring, founder of the Gestapo, and Adolf Hitler's Reichsmarschall