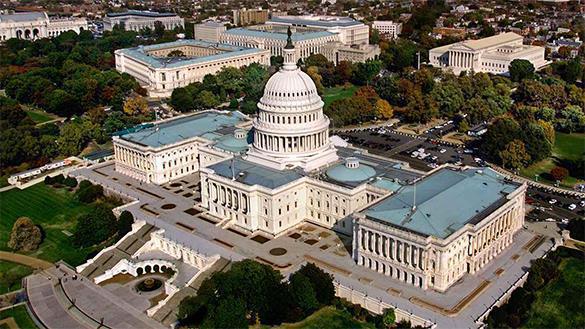 "When the United States goes to war they will introduce a war economy. This means sacrificing everything for the army and war purposes - and misery for the population. How can there be a self-sustaining economy for the United States? In times of peace you have 10 million unemployed - and this in a time of relative prosperity; during crises you have 13 to 14 million unemployed. Moreover you must export. To do this you must import. What? Products that will ruin your farmers, who are even now being supported artificially? No, there is no possibility. Instead, it is necessary to organize a kind of fascism - an organized control of the misery, because what is fascism except the organization of misery for the people. The New Deal tried to do it in a better way but did not succeed, because at that period you remained too rich for a fascist misery. However you will become poorer and poorer, and as a result the next New Deal will be in fascist form...

"Capitalism in the United States is running head on into those problems which impelled Germany in 1914 upon the road of war ... For Germany it was a question of 'organizing' Europe. For the United States it is a question of 'organizing' the world. History is taking mankind directly into the volcanic eruption of American imperialism...The United States cannot enter a world war, or even make serious preparation for it without assuring first the full domination of the Latin American countries...Washington will not permit...a rebellious attitude. The armies, of course, have a world purpose, but the immediate step is first directed to South America to teach them to obey. For the United States, Latin America is like Austria and Czechoslovakia was to Hitler - a springboard to the larger things...Washington will name the terms." Leon Trotsky

Just about one half of the year 2016 is in the world's history books. The 16th year of the 21st Century, a century that was supposed to usher in a new era of democracy, opportunity, "green thinking", and income for all, has thus far been a bust for much of the citizens of the world. Some 40.8 million displaced people roam the continents of the world due to the effects of climate change and the fallout from varying degrees of conflict/war ranging from the War on Terror and War on Drugs, to covert-overt regime changes in Brazil, Ukraine, Egypt, Paraguay, Iraq, Libya and Honduras. Syria remains a work in progress.

US economic statistics mask a crumbling economy and infrastructure. The US is tempting fate with the "up yours" brinkmanship with Russia and China. US encirclement of these two countries with ABM batteries, the training of militaries in countries bordering the two behemoths, and the propaganda campaigns waged against them may not turn out well for anyone on the planet. Russia and China are certain to, legitimately counter each escalatory measure. That's what nations do when threatened.

Some of the hot words at 2016's midpoint are brinkmanship, uncertainty, privatization, austerity, suicide, fascist, destabilize, threat, security, hybrid war, propaganda, disparity, racist, displaced, shootings, sanctions, and discrimination. Sides are being taken, and must be taken. Centrism/compromise appears dead: Fascist Right or Neoliberal Left are the options. This seems to be a worldwide disease. In the US presidential election, for example, its Donald Trump representing the former and Hillary Clinton the latter.  In the end, Trump may prevail simply because voters want to "see what happens."

The view from the precariat in the US demonstrates the plight not only of millions of Americans, but many more in similar situations around the globe: Economic and social life is bleak and American officials/office seekers, like their counterparts the world over, are repulsive and indifferent.  At the website More Crows than Eagles, this is extraordinarily well-said in a piece titled The Unnecessariat:

"Clinton doesn't give a s*** about me. When Clinton talks about people hurt by the economy, she means you: elite-educated white-collar people with obvious career tracks who are having trouble with their bills and their 401k plans. That's who boomed under the last president Clinton, especially the 401ks. Me, or the three guys fighting two nights ago over the Township mowing contract, we're nothing. Clinton doesn't have an economic plan for us. Nobody has an economic plan for us. There is no economic plan for us, ever. We keep driving trucks around and keep the margins above gas money and maybe take an odd job here or there, but essentially, we're history and nobody seems to mind saying so. Trump doesn't have an economic plan for me either. What Trump's boys have for me is a noose- but that's the choice I'm facing, a lifetime of grueling poverty, or apocalypse. Yeah I know, not fun and games- the shouts, the smashing glass, the headlights on the lawn, but what am I supposed to do, raise my kid to stay one step ahead of the inspectors and don't, for the love of god, don't ever miss a payment on your speeding ticket? A noose is something I know how to fight. A hole in the frame of my car is not. A lifetime of feeling that sense, that "ohhhh, shiiiiiit..." of recognition that another year will go by without any major change in the way of things, little misfortunes upon misfortunes... a lifetime of paying a grand a month to the same financial industry busily padding the 401k plans of cyclists in spandex, who declare a new era of prosperity in America? Who can find clarity, a sense of self, any kind of redemption in that world?"

Yet, "that world" is precisely what neoliberal vultures like Hillary Clinton and her corporate sponsors on Wall Street, in Hollywood and the Defense Industrial Base/Pentagon,  on the editorial pages of the Washington Post and New York Times, and in the many Associations and Think Tanks on the East and West coasts seek. It's the same story in the countries of the European Union. Trump seems to endorse much the same with his call for cuts in Social Security (at least in Europe there are mass movements like Nuit Debout are trying to resist "that world.")

But to "fight the power" is tough, even in the US Homeland: Look what happened to Flint and Detroit and to pensions, food assistance, and military veterans returning home from war. And when the neoliberal gangs decide that the government of a country needs to be reigned-in, resistance is often futile. And if the gang leader in charge is the United States, the fight is lost cause.

The US remains the dominant global power and, as such, can shape cognitive environments and physical terrain using its extraordinary instruments of national power (INP's): Diplomacy, Intelligence, Military, Economic, Finance, Law Enforcement, Information and Human Capital. There is a symbiotic relationship between the US government and private sector (academia, media, NGO's, telecommunications, etc.) elite who design and execute strategies, operations and tactics meant to maintain the supremacy of the INP's and, hence, America's supreme position in the world. And, there is, of course, dumb luck like having the Atlantic and Pacific moats protecting fortress USA.

The Honduran government fell in 2009 in a US supported coup. That country's social and economic fabric has collapsed. Brazil faces a similar plight: Rousseff-Lula supporters will not take the situation lightly. Consider the neoliberal financial forces at work behind the coup in Brazil and US links.

According to Telesur, the "Free Brazil Movement (MBL) is a far-right collective of young people that believe the solutions to the country's economic problems are based on free-market policies. Fabio Ostermann and Juliano Torres, two of MBL leaders, were educated in the Atlas Leadership Academy, linked to the Atlas Economic Research Foundation, financed by the notorious U.S. businessmen the Koch Brothers. Furthermore, the brothers have millions of dollars invested in the oil industry, which could explain their interest in destabilizing the Brazilian government and Petrobras. Another of the leading groups, Students For Liberty (EPL) - working together with the MBL - is the Brazilian associate of an organization with the same name in the U.S., also financed by the Koch Brothers.

Furthermore, investment banker Hélio Beltrão Filho, the national head of EPL, inherited shares in Grupo Ultra, one of Brazil's largest holdings. Grupo Ultra provided logistic and financial support to the right-wing military coup in 1964. A third important group involved in the protests is VemPraRua (Come to the streets), which has become the center of controversy in recent weeks.  After several journalists investigated the group, revealing that its financial support came from the Study Foundation, which belongs to Brazil's richest individual, Jorge Paulo Lemann. Lemann is owner of AmBev, the biggest beer production company of Brazil, and owns the Burger King franchise in the country. The businessman has denied taking a stand in Brazilian politics and claims the foundation's director used it for political purposes. Rodrigo Telles, who runs the foundation, is also an AmBev shareholder...many government supporters see the move as part of a coup, similar to what occurred in Honduras against Manuel Zelaya or in Paraguay against Fernando Lugo."

John Stanton is a Virginia based writer. Reach him at [email protected]