Key facts about homosexuality misrepresented to the public 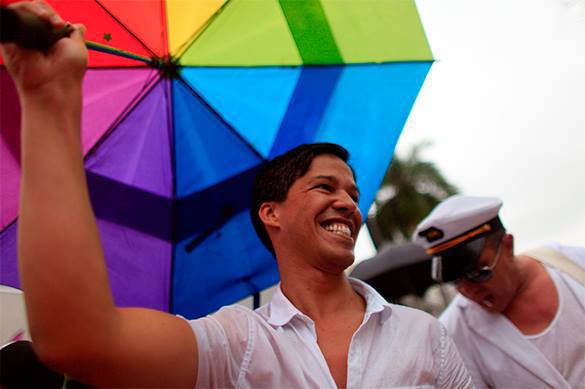 Families are the fundamental building blocks of society. In order for a society to flourish and remain healthy, the family should consist of a father and a mother who are able to produce and give rise to children. However, there is a rising trend in many Western countries, which is intrinsically in contradiction to what is considered a normal society: same-sex marriage. As of late, being modern and classy in society requires freedom, which is definitely true, but according to the changing western cultures and values that includes acceptance of same-sex marriage. Furthermore, many activists promote homosexuality as another human rights issue that must undeniably be protected. Some endeavor deliberately to oppose religious values and merits while some are misguidedly following them in order to be hip, modern, trendy and in tune with their notion of what a new modern culture should consist of. They are usually unaware of the damage it is imposing on society, especially on children and the young generation.

Accordingly, homosexual activists use every opportunity they get in order to spread their homosexual lifestyles both within their communities and outside their communities. The media seems to be the leading tool used to disseminate and justify their argument. Homosexual lifestyle and those promoting such rights are increasingly finding support and legitimization in the US via Hollywood movie and television shows, TV programs, reality shows, fashion related shows, news reports, columns, music videos, books, magazines and the list goes on. They intend to portray homosexual behavior as quite ordinary, healthy, and culturally hip. To intensify their argument, some activists depict homosexuals as very healthy, fit, good looking, classy, and successful people with executive professions within communities and societies. With the effect of these tools supporting the culture of homosexuality, 20% of Americans claim TV has shifted their opinion on the side of new form of marriages. Regrettably, in film and in the fashion industry people support homosexuality in order to get higher positions. The fact is however that reshaping marriage and marketing homosexuality are a grave danger to society via morality, physically and economically.

I feel it is important to remind the readers why I write this article. As a matter of fact, the purpose of this article is to remind young people not to fall into this brainwashing trap and to keep the strong spiritual values to have for an honorable life; in this way the members of society who pay heed to morals will respect them in the appropriate way. Therefore, it is everyone's responsibility to disclose the heinous and abhorrent acts that are deemed to be in compliance with this "new way" of life style all wrapped up in the name of human rights. Most importantly, homosexuality is strictly forbidden in the divine religions (Koran 7/80-82, Bible Romans 1/24-28) and in the stories of the holy books people who engaged in such indecency mentioned in the holy books were penalized (Koran 15/68-75, Bible2 Peter 2/6-10).

Considering the matter in terms of morals and ethics, we encounter a higher rate of child molestation in same-sex couple households. It is a moral obligation to protect the interests of helpless children in our society. Extensive researches show that children of same-sex parents are more likely to experience sexual confusion and to engage in homosexual activities themselves that will eventually cause them to suffer from psychiatric disorders, substance addiction, sexual assault, suicide, and sexually transmitted diseases such as AIDS. In the US alone, government investment in the domestic response to HIV has risen to more than $24 billion per year.

For this reason, it is alarming to view the statistics in terms of same-sex marriage and the increase in the number of children they adopt. For example, 94,627 children live with homosexual couples in the US and the estimated total number of children living with at least one homosexual parent range from 6 to 14 million. Similarly in the UK, as of March 2015, the number of adopted children by gay parents skyrocketed in the last 12 months reaching a record high. There have been many recorded cases of sexual molestation of boys by their homosexual parents and many more unrecorded because they are ashamed or afraid to report it. Thus, it is important to note Pavel Astakhov's - Russian Ombudsman for Children's Rights - evocative comments regarding the molestation cases of same-sex couples in an interview: "Russian orphans always attracted foreign perverts because of accessibility. The foreigners were simply coming and taking children for money." In conjunction with this report, Russia made some adjustments on adoption of Russian children by foreign families banning American citizens from adopting Russian children in 2012 and in the following year the State Duma passed a law that banned the adoption of Russian children by foreign homosexual couples. It makes us wonder about the psychological trauma these little children suffer. The first step to overcome this situation is to train children in terms of this threat they may experience. Children starting from the age 4-5 should be informed very meticulously regarding this issue; they should learn to take the necessary precautions to protect themselves and never hesitate to report the sexual abuses they undergo as it is not their fault and not an act they should be ashamed of.

In order to receive acceptance and compassion from society, homosexuals argue with some illogical excuses to justify their indecent acts such as claiming they have high estrogen levels or that they are genetically born that way. Yet, all these assertions have been refuted through scientific studies. There is no significant difference of estrogen or testosterone levels between homosexual and straight men. Also researchers have not found any supporting evidence that people who are homosexuals are somehow genetically dispositioned to be so. There is no genetic evidence whatsoever. Eight major studies of identical twins in Australia, the US, and Scandinavia during the last twenty years all conclude the same point, that homosexuals are not born genetically that way. It should be kept in mind that even if they were right, none of these would justify their indecent behavior. A person may be born without any sex or with two sexes or with some physical sexual defects but they do not constitute justification to behave in an indecent way. A person is responsible to keep their chastity on every occasion in order to live an honorable life.

Everyone should feel the responsibility to raise public awareness in order to have a better social and living environment by considering the examples and evidence enumerated in this article. It is crucial to inform and educate people about the serious negative effects of homosexuality on them and their environment. Besides, the activists should end promoting it as if it is something enviable because the truth is indeed on the contrary. However, it is important to stress that I am completely against violent and barbaric actions against homosexuals since what we are opposed to is only the abnormal acts they do. Therefore, people of good should join forces to protect against the damages which homosexuality inflicts on society as a whole.