Is the Clinton Foundation the Dulles Brother's Sullivan and Cromwell? 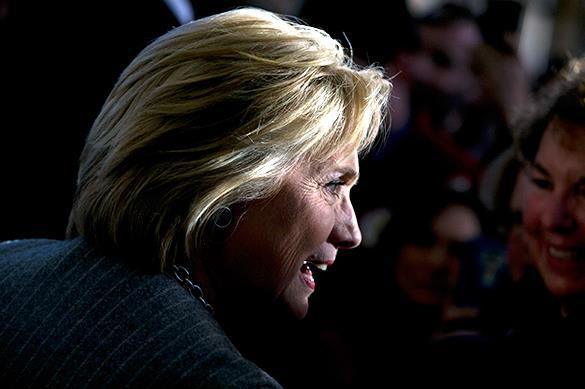 According to Counterpunch editors Alexander Cockburn and Jeffrey St. Clair:

"The desire for secrecy is one of Mrs. Clinton's enduring and damaging traits...Befitting a Midwestern Methodist with a bullying father, repression has always been one of Mrs. Clinton's most prominent characteristics. Hers has been the instinct to conceal, to deny, to refuse to admit any mistake. Mickey Kantor, the Los Angeles lawyer who worked on the 1992 [presidential] campaign, said that Hillary adamantly refused to admit to any mistakes. Since Vietnam, there's never been a war that Mrs. Clinton didn't like. She argued passionately in the White House for the NATO bombing of Belgrade. Five days after September 11, 2001, she was calling for a broad war on terror..."I'll stand behind [George W.] Bush for a long time to come", Senator Clinton promised, and she was as good as her word, voting for the Patriot Act and the wide-ranging authorization to use military force against Afghanistan...Of course she supported without reservation the attack on Afghanistan and, as the propaganda buildup toward the onslaught on Iraq got underway, she didn't even bother to walk down the hall to read the national intelligence estimate on Iraq before the war."

As Secretary of State, Hillary Clinton instigated and legitimized the overthrow of the Honduran government in 2009 not all that unlike the 1954 Guatemala Coup engineered primarily by CIA Director Allen Dulles, supported by Secretary of State John Foster Dulles, and with the glowing approval of President Dwight Eisenhower.

In a March 2016 interview with Amy Goodman on Democracy Now, Greg Grandin, a professor of Latin American history at New York University, discussed the fallout from the 2009 Honduran Coup. "I mean, hundreds of peasant activists and indigenous activists have been killed. Scores of gay rights activists have been killed. I mean, it's just-it's just a nightmare in Honduras. I mean, there's ways in which the coup regime basically threw up Honduras to transnational pillage. And Berta Cáceres [a prominent Honduran activist assassinated in 2016], in that interview, says what was installed after the coup was something like a permanent counterinsurgency on behalf of transnational capital. And that was-that wouldn't have been possible if it were not for Hillary Clinton's normalization of that election, or legitimacy."

In an April interview with Dana Frank, professor of history at the University of California, Santa Cruz, on Democracy Now, Frank indicated that President Obama had basically turned over Central and South America to Hillary Clinton. Frank then said this: "I think it's really about the U.S. pushback against the democratically elected governments of the left and the center-left that came to power in Latin America in the '90s and in the 2000s-Venezuela, Bolivia, Argentina, Ecuador, Chile, El Salvador, all these countries. And Zelaya was the weakest link in that chain. He, himself, did not come out of a big social movement base at the time of his election, certainly since the coup. And I think they were-the U.S. was looking for a way to push back against that. There's a very important military base, U.S. military base, Soto Cano Air Force Base, in Honduras. And Honduras has always been the most captive nation of the United States in Latin America. So, I think they were testing what they could get away with. And they got away with it. It was the first domino pushing back against democracy in Latin America and reasserting U.S. power, in service to a transnational corporate agenda."

It's Not Your Country or Life

The 1954 coup that ousted Guatemalan President Jacob Arbenz from the presidency had the same rationale as Hillary Clinton's 21st Century Honduran effort. David Talbot, writing in the must-read book The Devil's Chessboard: Allen Dulles, the CIA and the Rise of America's Secret Government, noted that Arbenz's mistake was antagonizing the United Fruit Company by attempting to "expropriate acreage from the United Fruit Company's large holding that were not under cultivation, and [Arbenz] had offered the multinational corporation fair compensation for the seized land."

But United Fruit had powerful connections in the Eisenhower Administration. John Foster Dulles had long been a legal advisor to United Fruit for many years. Both brothers held shares of stock in the company. Robert Cutler, head of Eisenhower's National Security Council, was the former chair of United Fruit.  Walter "Beetle" Smith, former CIA director and close friend of Eisenhower, would end up on the United Fruit Board of Directors after the coup. Even Eisenhower's personal secretary, Ann Whitman, was affiliated with United Fruit: her husband was its publicity director. Other violent overthrows of foreign governments and the destruction of their societies for crass business and career interests would be coated by Allen Dulles in layers of red paint; that is, Communist red paint. Murder, extortion, coups, wars, torture, oppression, censorship, lies, theft, profits, racism, threat exaggeration and evil leadership would be legitimized under the guise of national security during the Cold War.  Just so.

According to Talbot, "By the time the bloodletting had run its course [in Guatemala], four decades later, over 250,000 people had been killed in a nation whose total population was less than four million when the reign of terror began."
For many years, the Dulles brothers were ensured the support of the gatekeepers in banking, finance, media, the military and the US Congress through relationships made and sealed during World War I, the interwar years, and World War II. The Nazi's would serve the Dulles brothers well in their private and public roles. Allen would direct the merger of the CIA with some of the worst elements of the defeated Third Reich. John Foster-who while at Sullivan and Cromwell pushed back against closing its satellite office in Nazi Germany-- often advocated that nuclear weapons should be viewed as conventional weapons. In some sense, the two brothers seemed to possess the same zealousness and cruelty of the Third Reich.

Near WWII's end, Allen protected Nazi intelligence chief for the Eastern Front, Major General Reinhard Gehlen, from war crimes trials and would later merge Gehlen's operatives and network into the CIA's operation. Gehlen would become the first chief of West German intelligence (BND) and hold the position until 1968.  Allen also cut clandestine deals with other Nazi's-government officials, bankers, scientists, researchers, et al--through various operations like PAPERCLIP and SUNRISE. Nazi expertise was used in experimental brain/cognitive modification via ARTICHOKE and MKULTRA. Talbot speculates, chillingly, that Allen was connected with the assassination of John F. Kennedy and not only via his critical role on the Warren Commission. Talbot documents the frenetic activity at the ex-CIA director's residence in Georgetown, Washington, DC, prior to 22 November 1963. He also notes Allen's encampment at "The Farm"-a clandestine training center on the CIA campus-from 22 to 24 November 1963.

It's a Good Day for Someone Else to Die Hard

According to Consortium News, when Hillary Clinton was asked about the death of Muammar Qaddafi, Libya's deposed ruler, at the hands of a mob, she said, "We came, we saw, he died." That's a comment Allen Dulles--or a psychopath--might have made. That's worrisome in a world in which President Hillary Clinton may become a reality. Her penchant for war, secrecy and cover-up, Yale pedigree and alumni network, corporate connections from Wall Street to London, fealty to Israel, shapeshifting Republican/Democrat persona, and the use of the Clinton Foundation as a sort of non-profit, quasi-government, global intelligence/networking agency makes comparing her with the Dulles brothers-and their public/private lives, not as crazy as it first seems. The Clinton Foundation has initiatives in dozens of countries throughout the world. Its connections in international corporate board rooms and the principals of foreign national and local governance give it access to information/intelligence. It is also involved in US domestic political campaigns indirectly through its donors.

For example, one of the Clinton Foundation's board members is Frank Guistra. According to a 2013 Huffington Post article, "Clinton was borrowing [Giustra's private jet] to begin a four-day speaking tour of Latin America that would pay him $800,000...Frank Giustra was forming a friendship that would make him part of the former president's inner circle and gain him introductions to presidents of Kazakhstan and Colombia... Giustra's self-serving philanthropy also took him and Clinton to Kazakhstan in September 2007, as documented in a January 2008 New York Times investigation... Within two days [of the beginning of the trip], corporate records show that Mr. Giustra also came up a winner when his company [UrAsia Energy Ltd.] signed preliminary agreements giving it the right to buy into three uranium projects controlled by Kazakhstan's state-owned uranium agency, Kazatomprom,"...The monster deal stunned the mining industry, turning an unknown shell company [UrAsia] into one of the world's largest uranium producers in a transaction ultimately worth tens of millions of dollars to Mr. Giustra....Just months after the Kazakh pact was finalized, Mr. Clinton's charitable foundation received its own windfall: a $31.3 million donation from Mr. Giustra... Within a year and a half, Giustra sold off his stake in the Kazatomprom joint venture for $3.1 billion, which he had originally purchased for $450 million."

In a 2015 Washington Post piece, the governor of the Virginia, Terry McAuliffe,  "More than 175 contributors to the Clinton Foundation and to Hillary Rodham Clinton's 2016 Democratic presidential campaign have dug deep into their wallets for McAuliffe (Democrat), often giving prolifically despite little or no connection to Virginia...Among them is an Omaha database executive who lavished so much corporate jet travel on himself and the Clinton family that shareholders forced him out. A Hollywood media mogul with a singular interest in Israel. And an Argentine-born energy tycoon who recalled visiting Richmond just once - flying in and out years ago with Bill Clinton, his Georgetown classmate. Of the $60 million McAuliffe has raised for his two gubernatorial bids, inauguration, political action committee and the Democratic Party of Virginia, nearly $18 million has come from contributors to the Clinton Foundation or to Hillary Clinton's current campaign."