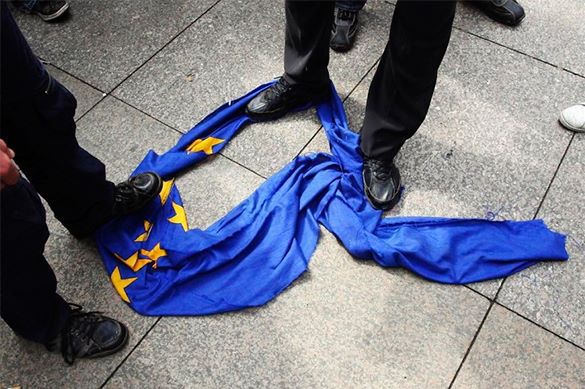 The handing of Ewald von Kleist's prize to the former French foreign minister Laurent Fabius became what the press described as "the pivotal moment" of the security conference in Munich. A good half of the world's leading politicians stood to attention as the wars in Syria and Ukraine (the two countries where Mr. Fabius was most actively involved during his stay in the ministry)  continued to collapse. In fact, the recent resignation of Mr. Fabius was accompanied by so many perks and honors, that one is tempted to ask: do the European creators of the numerous Western-made paradises in Ukraine, Libya, Syria and the Balkans really deserve all of their numerous "golden parachutes"? In France, Fabius will be heading the Constitutional Council - the body now charged with providing a normative base for tightening the screws after last year's terrorist acts in Paris. The counterterrorist measures are expected to include all sorts of restrictions, including stripping the unwanted people of their French citizenship - a measure which only Brezhnev's Soviet Union was capable of previously.

During his tenure, Mr. Fabius proclaimed that Bashar Assad, the president of a sovereign country called Syria, "did not merit to live on the planet Earth," Mr. Fabius also was one of the "guarantors" of the agreement on separation of powers between the Ukrainian president Yanukovich and the radical Ukrainian opposition in February 2014. The agreement was nullified by the Western-supported violent mob of Maidan in a few hours after being signed, but that did not seem to bother the "guaranteeing" Mr. Fabius in the least. Ukraine was plunged into chaos and civil war, but Mr. Fabius continued his career unperturbed.

After all, Laurent Fabius is not alone - there are many other former foreign ministers in Europe which destroyed whole countries, but which now enjoy not just comfortable lifestyles, but also important advisory positions.

The former British foreign secretary Jack Straw, who strongly pressed for the invasion of Iraq in 2003, later became Britain's Lord Chancellor, the Leader of the House of Commons and even Secretary of State for Justice. All of this - despite Straw's admitting that the decision to invade Iraq would "haunt him until the end of his days."

Somehow, it is always the critics of the invasions who lose their jobs (such as a former BBC journalist Andrew Gilligan, who accused the government of "sexing up" Iraq's nuclear dossier). The perpetrators of the invasions get fatter and fatter jobs, publishing "sexed up" memoirs, like Mr. Straw who recently published his "Memoirs of a Political Survivor." Pity that not all of the people whom Mr. Straw "democratized" in Iraq have survived...

But the most active figure among the foreign policy "has beens" is Carl Bildt, the former Swedish foreign minister and the former UN's High Representative in Bosnia and Herzegovina in 1995-1997 (he became the de facto top person in Bosnia-Herzegovina after that country became a Western protectorate as a result of the Dayton agreements of 1995). The results of Mr. Bildt's stewardship of the Balkan conflicts are dubious to say the least (with recent protests in Bosnia and hundreds of thousands of refugees still unable to return to their old homes all over the former Yugoslavia). However, Mr. Bildt is now actively advising the new Ukrainian regime, which he actively helped to install during the Maidan "revolution" in 2014. And his advice seems to have just about too much resonance in the Ukrainian elite.

In January 2016, the idea of appointing Bildt to the position of the prime minister (replacing the unpopular Arseny Yatsenyuk, nicknamed Yats and put in his position by Victoria Nuland) - just days ago this idea was actively floated in the surrounding of the Ukrainian president Petro Poroshenko and in the Ukrainian media. On January 26, Bildt kindly turned off the offer, saying that Ukraine "already has a good prime minister." This response puzzled  a lot of observers, since Mr. Yatsenyuk's rating has been in single digits for a number of months, with one of the Rada's deputies even once trying to remove Yatsenyuk from the Rada's dais by grabbing his prime-ministerial balls. See here.

Nonetheless, the question remains: why did the former "master of Bosnia" suddenly become so popular among the Ukrainian nationalist circles? (Mr. Bildt was even made a member of Ukraine's "anticorruption bureau" by president Poroshenko, who obviously believed in Bildt's telepathic ability to see through the Ukrainian crooks from his native Sweden.)

One of Mr. Bildt's strong sides in the eyes of Poroshenko could be his support for the "Croatian" variant of solving Ukraine's minority problem. In 1995, Croatia, who had been forced to put up with the presence of a Serb enclave on its territory (named Serb Krajina), conducted a military operation against the enclave, ethnically cleansing it and making it a part of Croatia in all senses. The attack was facilitated by a truce which Croatians had signed with Belgrade three years earlier and by the brinksmanship of Western diplomats (including Mr. Bildt), who made sure Serbia's leader Slobodan Milosevic would stay neutral during the conflict.

In Ukraine, parallels are often drawn between Serb Krajina and the two Russian-speaking regions in the east of the country, which proclaimed themselves Donetsk People's Republic and Lugansk People's Republic and which maintain close ties to Russia, unlike the rest of Ukraine. So, Bildt's advice for Ukraine, which he pronounced in Kiev, sounded pretty ominous: "The territory occupied by Serbia was returned to Croatia, and now no one remembers about this conflict." Bildt did not mention that three Croatian generals were tried by the International Tribunal for the former Yugoslavia in the Hague for their atrocities committed during this "return of the occupied territory" in 1995.

In order to make his thought even more clear to Ukrainians, Bildt pronounced the following phrase during his visit to Kiev: "You can do the same, and this will be in the interests of Ukraine, Russia and European security." The trick, in Bildt's opinion, is just to catch the moment when the Russian president will be looking the other way, away from the embattled Russian-speaking republics in Ukraine.

So, Mr. Straw, Mr. Fabius and Mr. Bildt. This is the kind of people who have been heading the European diplomacy. Everyone can see their results - countries destroyed, people displaced and killed. And everyone can see the kind of lives which they are leading after their resignations - very different from the lives of their displaced, insulted and dispossessed victims.