Trump: Watch Your Back! 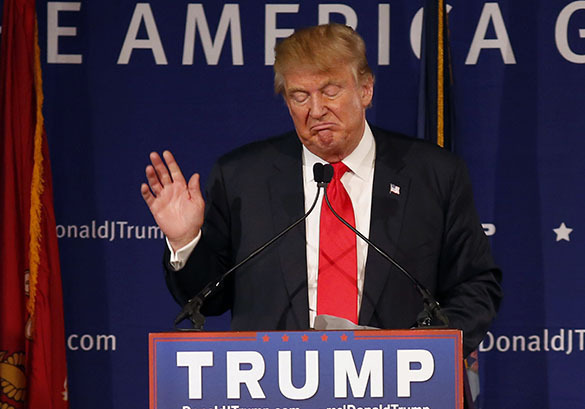 Well it appears that Donald Trump almost won the final Iowa debate he didn't even attend because of some problems with Fox News and one of their media attack dogs. Today he was within an ace of winning the Iowa Republican Caucus. Should this snowball continue, then the GOP establishment can't stop him, the media elites can't stop him so what happens next?

To put my cards on the table for readers, I'm a libertarian/conservative political commentator and financial expert with some liberal views on social issues. I know and first supported Rand Paul as I did his father Ron before him. I decided a few months ago that only someone financially independent of the corrupt political establishment of both parties could hope to have any real impact to create the desperately needed political change in the closed two-party monopoly of the United States. So you can assume that I am a lukewarm supporter of Donald Trump.

I have often written that you can do anything reasonable and within the law and say anything you choose in the United States and get away with it except when you have the public support to threaten the ruling power elites that control both political parties, big business, the establishment think tanks and the media. Well now Donald Trump has shown that the emperor or gatekeepers that really run everything and control information flow and public opinion appear powerless and impotent in the face of the Trump political blitzkrieg.

Party Elites Have Always Chosen The Presidential Nominees Until Now

Remember historically the power elites behind the scenes usually could care less which party won the presidential contests because the differences in views and governing are only cosmetic for public consumption. Candidates and the entire political process are usually carefully crafted to give the false impression that voters really can make a difference.

If you carefully look back over the last 50 years, races are either too close to call where either party can win and both candidates are controlled or are landslides where the winner is never in doubt and the more extreme loser on the left or right never really has no a chance to win.

At this time, the presidential election in 2016 is somewhat unique in that Bernie Sanders has some political momentum on the Democrat Party left and a small chance to beat Hillary Clinton especially when you take into account her potential legal problems. So this race can go either way and like him or not, Bernie is not an establishment-approved candidate but surprisingly neither is Donald Trump.

Normally this would not be a problem because if there is some question as to the winner in one party, then the other party candidate is usually a controlled shoe-in but not this election cycle. Right now it appears that Donald Trump, another outsider could possibly win the Republican Party nomination for President. Therefore 2016 is unique in my lifetime in that an outsiders on the left and right have a chance to win their respective party nominations and the Presidency and this is uncharted waters in the American body politic.

So What Happens Next?

Well the dirty tricks and character assassination will continue in an attempt to eliminate either the non-establishment Democrat Bernie Sanders or the leading GOP likely candidate Donald Trump. There is also some talk of a "Ross Perot style" doomed third party presidential campaign by Michael Bloomberg, the popular billionaire former mayor of New York City. But if neither Sanders nor Trump are defeated then what course of action is open to the power elites because there has never been an outsider elected President of the United States in the last 50 pus years.

Will A Crazy Lone Wolf Assassin Come In From the Cold?

I am not a conspiracy theorist but these are desperate times not seen in the United States since Vietnam conflict. Both the right and left now hate Washington political leadership, our foreign policy failures in the Middle East have doomed the petrodollar that has been a major contributor to dollar strength and prosperity in the United States and our debt load growth is unsustainable. Times are tough and we should look back at a similar time in American history to get an idea of what could happen now in the US presidential election.

Note this is not a liberal or conservative contest and leaders like Ron Paul are permitted to speak the truth about the Federal Reserve, power politics and foreign policy without threat or risk but his support was limited. He did not have the ability to win the presidency or have a major impact on future government policies or programs. Donald Trump does and here is why I am warning Trump to watch his back.

Think back to the dark days of Vietnam when America was similarly divided but without the end of empire hegemony and economic threats of today. Remember the assassination attempt on George Wallace on the right, John and Robert Kennedy in the Democratic Party center and Martin Luther King on the left? Each of these leaders had the ability and public support to change and dramatically impact the US power structure and they were all shot.

Each had an exploding mass appeal and all but Wallace were shot fatally thus ending their insurgency against the political establishment. To this day, the public is fed the fallacy that we have the guilty perpetrators and while we certainly have some of the crazed individuals that might have pulled the trigger, no broader conspiracy has even been highlighted for obvious reasons. I fear this horror of political assassination has the potential if not probability of happening again in 2016.

Contrary To the Mainstream Press Accounts, There Is Nothing Unique About Trump's Popularity Among the American Electorate

They just don't want to address the real reasons either for his popularity or why he is leading in the GOP presidential contest. Trumps popularity is simply an American manifestation of the response to the decline of the Middle Class and open immigration that is increasingly finding their employment, family and religious values cornered and marginalized by both parties playing to a lethal combination of the establishment left and right as well as big business.

We have already seen this backlash phenomenon in Europe with anti immigration and EU party growth in the populist anti-European right. From Nigel Farage with the UK Independence Party to Marine Le Pen and the National Front in France to the 40% of Germans who say Chancellor Angela Merkel should resign over her failed policy for Islamic refugees fleeing their destroyed homelands.

Putin's soaring popularity rates in Russia despite economic difficulties clearly show Putin is also on the new patriotic, my country first paradigm. These new movements threaten the Washington world order and represent real discontent and change and are more populist and right wing than before. Increasingly disenfranchised citizens are looking for leaders who love their country and support traditional values rather than platitudes about open immigration, jobs going elsewhere and the triumph of global big business at the expense of small independent local business entities.

Therefore 2016 is likely the year of Donald Trump in the United States if he survives the election process and becomes President. He and his advisors obviously have a thorough knowledge of American history especially rough economic times that the US will go through due to the coming death of the petrodollar system and our crippling national debt load as well as an understanding of the growth of patriotism and rightwing populism in Europe

I urge Trump to buy the best private and loyal protection services available in addition to Secret Service protection as a presidential candidate. It only takes one successful lone wolf with extremist views to take you out of the presidential race and if the powerful special interests are determined to prevent you from becoming President this might be their last chance to stop your election.

I join tens of millions of other Americans who believe that Trump may well be America's last chance to restore economic sovereignty and financial security to the United States. In addition to an America First foreign policy respecting the national resources and historic areas of influence of other great nations, America must have a President willing to make the hard decisions necessary to roll back the debt levels

Our last good president was probably President George H.W. Bush during the period 1989 to 1993 and since then we have suffered through the incompetence of Bill Clinton, George W. Bush and Barack Obama and the real America is no more.

So Trump, watch your back and be safe as we watch this unique political race unfold in the United States. Times certainly are changing in 2016 and I hope for a better America and government more accountable to the people. I'm sad and concerned to state publically that your safety and survival are paramount for this to take place.

Ronald Holland is the author of several books as well as numerous special reports and hundreds of articles on finance, investments, history and politics. He speaks and moderates frequently at financial and free-market conferences and has developed Swiss oriented financial products in the US and Switzerland and his lived and worked in the US, Switzerland and Canada. He was head of a bank trust department, president of an investment firm licensed in 47 states and involved in resort real estate marketing and sales. He consults with a wide range of individuals, corporations and entities. Ron Holland can be contacted on his blog if you have any questions or comments.