Mr Janis Sarts, director of NATO's "Strategic Communications Centre of Excellence" (Stratcom), basis in Riga, has declared that Russian nationalists are to blame for the rise in racism in Europe. Of course we have known all along that NATO specializes in conspiracy theories (and in bombing defenseless civilians), but the drivel emanating from its Latvian branch is just the height of stupidity. 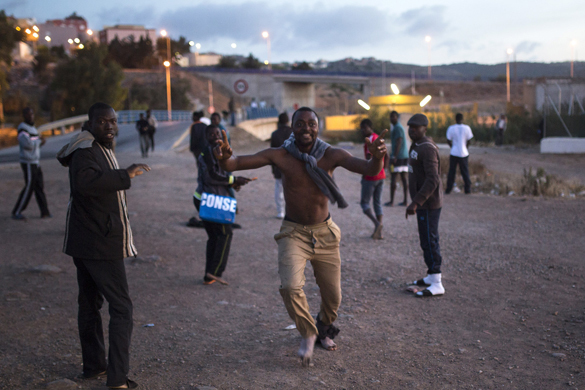 What Stratcom calls "racism" is mostly the reaction of desperate members of the European native middle and underclasses to the tsunami of refugees currently flooding their neighborhoods. (On the one hand the US deserves admiration for its rapidity and perseverance in recruiting and training hundreds of little European Quislings to carry out orders from Washington. On the other hand, the US government displayed its usual hubris and general lack of knowledge about the world in selecting just the wrong people, Mr. Sarts being a case in point.)

Seldom in history have ruling elites shown the extent of contempt of the current EU political class towards its constituents.. Since 2008, when Europe was plunged into a crisis that is becoming more serious by the day, governments have been cutting budgets. It is especially the spending on social programs, housing, health care and education that has been cut most drastically. But it was no problem to spend countless millions on bombing Libya back to the Middle Ages, it is no problem to spend millions in arms and training for ISIS, Al Nusra, Al Qaeda and other terrorist gangs across the Near East. Nor is it a problem to outlay billions of Euros to buy a US fighter plane (JSF) that is about the most inferior kind of military hardware ever devised by US technology (and that is no mean feat in itself!).

In the meantime, the elderly in Western Europe have their pensions cut, retirement age has been increased to 67 years, the elderly and sick can only get a shower once a week, and there is hardly any personnel left to take care of them. Unemployment is rising consistently (currently 50% for young people in Italy, Greece, Spain) and there are no signs or even serious expectations of improvement. Except for the rich, who are becoming richer as the poor are becoming poorer and the middle class is dwindling. To put it succinctly: the welfare state in Europe is being dismantled.

And then, in the summer of 2015, all of a sudden, out of the blue hundreds of thousands of "refugees" decide to come to Germany, Austria, the Netherlands and Sweden. Chancellor Merkel extends them a warm welcome and announces there is no limit to the number of these "refugees" that Germany will take in, as a result of which the columns of migrants grow even longer.

More than two thirds of the "refugees" are men between 20 and 50 years of age. That in itself is not unusual, since initial waves of immigration are always largely masculine. That is because historically, people migrate in search of work (and better living conditions). But there no work in Europe, nor will there be in the future. Moreover, German industry is reeling under the US-ordered sanctions against Russia for the alleged shooting down of the MH17 jetliner in 2014. (Another US/NATO conspiracy theory, by the way.) As I said earlier, that is why I think the "refugees" are being brought in to accelerate the imposition of martial law in the EU. Why else would responsible politicians so blatantly ignore the wishes of their constituents? Therefore, there just has got to be evil intent on the part of the political class. The constituents, by now desperate, are wondering what they can still do to have their rulers listen to them. Apparently, not much. Now even innocent Pegida is being outlawed, courtesy of Mr. Sarts. The EU ruling elites are stooping to even lower depths in trying to blame "Russian nationalists" for the rise in "racism". In doing so, I am sure they are stupid enough to actually believe this nonsense, deceiving themselves in the process.

The whole thing would actually be completely laughable, if it weren't so serious. The extent of stupidity and evil to which the European political class has sunk does not portend well for the future. These people, whether they are called Merkel, Juncker, Hollande, Rutte, Cameron, Tusk or whatever their names might be, are cheap impostors and crooks with blood on their hands.

The human drama they are directing and presiding over has already claimed many victims. There will be many more when winter sets and when desperation among both the European underclass and "refugees" mounts.

Actually, the best thing the European underclass and the new migrants could do is to form a common front against the political classes that are deceiving them. Heck, those thousands of military-age males would actually be a welcome reinforcement to help storm the EU palaces and government buildings!

Yet I believe the political elite will beat them to it. After all, they have been in power ever since the end of World War II and their US bosses will not tolerate a truly democratic and free Europe.

Oh, and one more thing: with the kind of ruthless, arrogant rulers they imposed on them, the Europeans do not need any "Russian nationalists" to help them become radicals. As a matter of fact, they are perfectly capable of radicalizing by themselves. I suggest Mr Sarts keep that in mind.