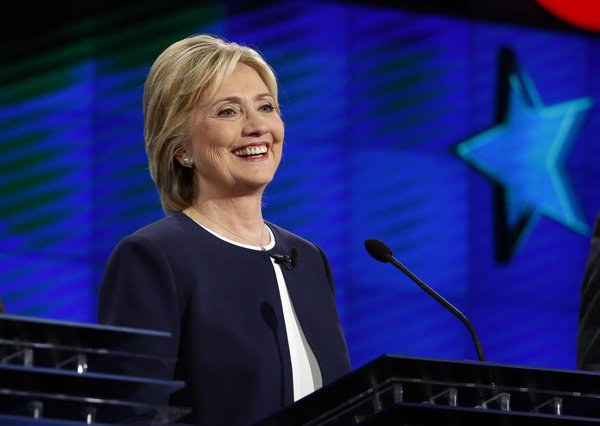 If I had my druthers, I would prefer Hillary Clinton not be the first woman president of the U S of A.  Not that I underestimate her intelligence or capability to occupy this high office, but I feel very strongly that her marriage to "Scoundrel" Bill has both molded and tainted her against being credible to lead this nation... much less to be a leader most of the world would trust. In this just completed Democratic first debate, of the five politicians taking the podium, she was perhaps the only unworthy presidential candidate; yet she performed quite well in a rehearsed, polished fashion that drew accolades from a guru-press grading her at CNN.  Understandable; for gurus often deal in atmospherics, not substance!

If winning-losing was at issue in this debate, none of the five participants won or lost, as far as I am concerned.  The American people, at least those who watched the debate, were the clear winners; as for who lost: the entire slate of Republican candidates.  There was such substantive contrast between this debate and the two idiotic spectacles which have been staged by Republicans so far that much of the moderate Republican base, if viewing this exposure of national problems-issues, must have at times questioned their party's errant ways being heirs to the greatness of Abraham Lincoln.

What became obvious in this debate: Americans need to be educated in civics, not just entertained.  Those who give sole importance to the number of viewers as the measure of debating success are blatantly missing the point, taking us back to the old days when the Roman Coliseum served the emperors keeping the citizens of Rome entertained, using gladiators and killing Christians, bloodying them to the ferocity of lions, for their own governing purposes.

Record-breaking millions watched on TV this Democratic debate, and an even higher figure watched the previous two Republican debates where the celebrity reality star, posing as an insulting, arrogant-funny clown, Donald Trump, slapped silly his long list entourage of haughtiness-apprentices... all unbelievably emerging from a midget car with license plates reading "Special Interests."  Dare to compare!  There were five critical issues mentioned, if not fully discussed, at the Democratic candidates' civil gathering: income inequality; a past flawed foreign policy; climate change; money and elections; and acknowledgement of a very real and persistent problem in America's racial divide.  In contrast, and serialized in two debates, Trump and his lesser Republican political-luminaries concentrated on all the negative aspects of the one thing which has done much to make America strong and diverse: immigration.  A contrast of good and evil if there ever was one! Little left to our imagination as to which debates provided the Kardashian-worthy trash.

It's unfortunate that CNN did not see fit to add a sixth candidate to the mix, Harvard Professor Lawrence Lessig.  As refreshing and informative as the Democratic debate turned out to be, Lessig's input on undemocratic elections, and how money determines their  outcome, would have provided a valuable mini-seminar for the public.  Perhaps even resulting in the professor concluding that his work as candidate was fait accompli after reaching 20+ million people with his message in one evening...

Tuesday night's debate was a sane victory for the Democratic Party, all five people doing their thing with a common, worthy goal: that of a better, not a greater America.  Lincoln Chaffee, former senator and governor of Rhode Island (also a former Republican), did his thing, and so did Martin O'Malley, former governor of Maryland.  And Jim Webb, an ex-marine, former Secretary of the Navy and ex-senator from Virginia, did show many of us that even if he doesn't make it as commander-in-chief, he would make a capable Defense Secretary in any administration, Democratic or Republican.  As for Senator Bernie Sanders... what can we say that will properly honor his zeal?

Bernie is our own Jewish prophet who's been preaching in the wilderness from his independent pulpit, as a democratic socialist - a term dirty-tainted by Wall Street with communistic and anti-American pigments.  Bernie has pointed the fate of the poor and lower-middle class in America, blaming the money-elite for the greatest disparity in the US between haves and have not's, greatest among economically advanced nations.  Kudos to the Senator from Vermont who probably changed more than a few minds in the debate giving a new, honorable meaning to the "S" word, until now a toxic word...

It's also unfortunate that Senator Elizabeth Warren decided a while back not to be a presidential candidate.  It could have given the US not just a most capable person in the White House, but our first woman President.

Perhaps Bernie Sanders can make inroads by convincing her to become his running mate; or, predicting the nature of humble Bernie, to have her chosen in the Democratic convention at the top of the ticket.  Whether Democrats have the vision to run a Sanders-Warren, or Warren-Sanders ticket, will ultimately determine whether a three-plus decade American spiral into oblivion can be halted, then reversed.