Kiev Officers Defect: 'Use of armed forces against civilians is a crime' 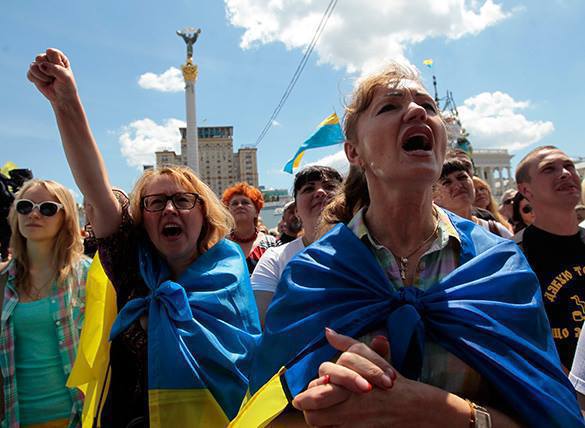 Sanctions were made against Russia because they claimed Putin invaded Ukraine. Last January 29th the general of the whole Ukrainian army appointed by Poroshenko who was appointed by Obama asked, Russian troops? What Russian troops?  The Chief of Staff of Ukraine's entire Armed Forces, General Viktor Muzhenko said, "We (Ukrainian army) are not engaged in combat operations against the Russian army." Recently, June 22nd, Major General of the armed forces of Ukraine, Alexander Kolomiets, along with other officers defected to Donbass in SE Ukraine. The West continually lies but like the Old Russian proverb says, "One word of truth shall outweigh the whole world".

The west in their propaganda war against the truth has blinded their people into legalizing genocide all over the world including Ukraine. The imps of the MSM have ignored Kiev generals, the OSCE reports and the cries of Mothers in Ukraine who "get endless coffins for funerals". It comes as no surprise that Obama murders for his masters in Ukraine while building an iron curtain around America.

We see that behind the American Iron Curtain they have not been able to understand that Obama admitted the US "Brokered" a coup in Ukraine. The "uh" video was not enough even with US troops in Yavoriv, Ukraine. Kiev's General Viktor Muzhenko's statement was not made public. Regarding the fighting in Ukraine, Americans are not aware of the fact that Russian troops have never been and do not exist there. The OSCE confirms it but the sanctions continue against Russia even though they are trying to bring peace to the Ukraine crisis. In the tradition of Cato, the war rhetoric continues, "Russians must be destroyed!"

Fortunately, people are coming to their senses in Kiev. They have protests against Poroshenko and the puppet government. Outside the US Embassy where the coup started, they yell, "Yankee go home!". They demand the US army to leave Ukraine. They are getting bolder with their protests. It was not that long ago that anyone who protested Poroshenko or the US disappeared or was murdered like Oleg Buzina who predicted his own murder when he said in this video, "the ones waiting for me...the ones bought and paid by US State Department!"

Major General Alexander Kolomiets speech to the press was very impressive. "Civilians including old people, women and children are being killed. Mothers are crying all over Ukraine. They get endless coffins for funerals. Being human, I can't watch this with detachment. I'm a general of the armed forces of Ukraine, I've devoted all my life to protect Ukraine from outside enemies. I declare: the use of armed forces against civilians is a crime. The constitution of Ukraine clearly prohibits the use of the armed forces against their own people.

Officers are sitting next to me. They didn't want to fulfill criminal orders of the fascist junta. They don't want to kill their own people. This power only wants to kill and make fortune on this war. These officers, arms in hand, are now protecting their families and their houses. I address to the world community. Please, pay special attention to systematic violations of human rights. Genocide of population, murders of civilians, old people, women, and children. Hundreds of soldiers and officers crossed over to the side of DPR during the "anti-terrorist operation" (ATO). They are now protecting our frontiers in Donetsk People's Republic.

I went through Afghanistan. Many of these officers also were at hot spots. Fear is not the most important factor. All the people sitting here want one thing: to protect, what has been created here, against the Kiev criminal power."

The west cannot deny what he says so they will ignore him. However, the moronic leaders of America wonder, "What does it mean, one word of truth shall outweigh the whole world?". It means the truth will come out even though the western world lies and ignores the truth in Ukraine. The grass grows towards the sun no matter how much concrete men pour on the earth. Life goes on even after a war or nuclear disaster.

In 1990 a monk from the Russian Orthodox monastery at Zagorsk, carrying a life-sized crucifix seven feet tall stood before Lenin's tomb and cried out to Gorbachev in a voice of thunder: "Mikhail Sergeyevich, Christ is Risen!" So, I declare to the west, to the American propaganda machine and Obama himself, Christ is Risen! Whatever evil you do now you will pay for in Hell while Ukraine is healed by Christ himself. God does not forget his people. "They that hope in the Lord shall renew their strength, they shall take wings as eagles"- Isaiah 40:31.

Kiev Officers Defect: 'Use of armed forces against civilians is a crime'