Do you see the blood, America? 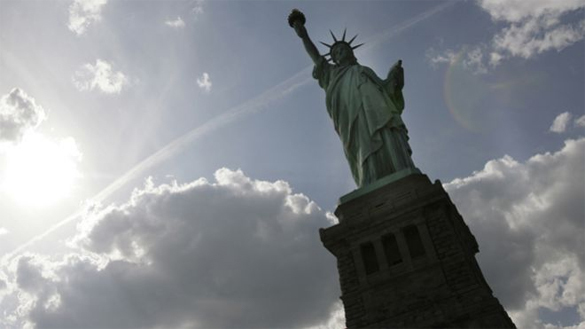 Was there a Memorial Day for innocent civilians? Victory Day in Russia and Memorial Day in America have come and gone. WWII, The Great Patriotic War is a tragedy of human history and the number of deaths is incomprehensible. From Normandy to Stalingrad, Hiroshima to Dresden, rape of Nanking to the siege of Leningrad. The life and death struggle was on a titanic level and is retold from many different perspectives. Stories of heroism and self-sacrifice from all combatants are heralded. The enemy's horrific acts can be described as only evil. It shocks even the most heartless person. Nevertheless, war continues today as though its lesson was never taught and the US has become the fascist monster it helped destroy.

The Big bully syndrome from the US government causes it to lie every which way to stay in power over the world. Calling dictatorship a democracy and enslavement freedom. When asked why they fight they shout to spread democracy, liberty and freedom! American Peacemaker? Meanwhile, they spread death like a plague. They establish enemies in the media before attacking.  The number one terrorist calls their next victim terrorists; painting a picture of the intended target as evil before the innocent are slain. "Now the gods were sitting with Jove in council upon the golden floor". It is the same old business of conquest as in Caesar's or Alexander's day. The lust for money and power drives them on taking care of their family and forgetting the rest. Peace is unprofitable and the spoils of war are unceasing.

Do you see the blood, America?

"My son, My son!", she cried out from Horlivka, Ukraine. Her heart and world was destroyed. "How can I live through this?", she asked. "Look blood is everywhere. Do you see? Her arm was ripped off. And she was trying to stop the bleeding by herself."

Do you see the blood, America? It is on your hands. Even Israel, when they disobeyed God, was punished. The God-given freedom America enjoyed at its birth and nurtured by the Founding Fathers has decayed into almost nothing. Muslims and Native Americans from Central and South America are invading it. The US is heavily in debt to China, Japan and Great Britain. The US is a police state with crime and unrest rising.

The more illusions of righteousness they present on their televisions the more blood will be spilled on their own land. Americans have seen their country fall blaming communism, immorality, Hollywood or the government. Look again, America. Do you see the blood? It cries to Heaven for vengeance! Blood on your hands from foreign lands. You may have not killed them but you voted for those who perpetuate wars or you stood by and did nothing!

"Who is Poroshenko for you?", Graham Phillips asked her. "A fascist! Fascist! Real fascist! Poroshenko, Yatsenuk too, all his gang...they are all fascists! Fascists with a capital 'F'! Woe betide them! God damn their children, grandchildren, their great grand children too! Cursed for their whole life! They are covered in blood to the top of their heads! What for are you killing peaceful people?" "And Obama?", he asks. "As for him... Scumbag, scumbag of the highest degree! Reptile! A grody monkey, God forgive me! "

The USA was not like this in the past. I knew her well. Why has America changed from being a wholesome and decent society to Sodom and Gomorrah? Because, they are covered in blood to the top of their heads. God damned their children, grandchildren, their great grand children too! Cursed for their whole life! Why are you allowing your government to kill innocent people not only in Ukraine but in other countries? America, your fate is in your hands. Blame the corporations, the rich or the White House if you will, but it's your country. If someone is burning down your house pointing fingers won't help. Get up and put out the fire.

Yes, communism, immorality, Hollywood and the government have their share of the blame. However, innocent blood spilled on foreign soil is murder no matter who Obama blames. The innocent killed will not be forgotten because God is just. "Thou shalt not kill", is a commandment broken many times against innocent civilians by the US. The western media can lie to its people but God's judgments are final. Without repentance, more chaos and deaths will follow in America. What do you see on your evening news America?

The US recently overthrew Ukraine, Libya, Egypt and are attacking Syria while aiding Al-Qaeda who are killing Christians as US Senator Rand Paul mentioned. General Wesley Clark had spoken about 7 Middle East Countries that were on America's hit list. Now the violence they created abroad infects America. William Blum asked, "Why will there never be a coup d'état in Washington? Because there's no American embassy there." You should read his book "Overthrowing other people's governments: The Master List" "Until people understand fully the worldwide suffering American policy has caused, we will never be able to stop the monster." From "America's Deadliest Export: Democracy -The Truth About US Foreign Policy and Everything Else" by William Blum

Last May 9, President Vladimir Putin was holding his father's picture and walking with the people in the Immortal Regiment March. He said, "People understand that the fight against Nazism was very important, and the victory over Nazism is a very important milestone in the history of mankind...we realize that now the responsibility for Russia is on our shoulders." Did Americans following the "Greatest Generation" realize their responsibility? No. The more the US destroys innocent life overseas the more the violence, decadence and misery will increase in America.  The more evil they inflict on foreign land, the more evil will abound on American land.

The average German citizen was also surrounded by propaganda in 1941 as Americans are today. They lived good lives and could not feel the gravity of war and its effects because the war was far away. It was not their primary concern until the war came to their doorstep. The killing of innocent civilians brought Nazi Germany and Japan to justice. Before them it was the mighty Roman Empire and great Egypt that fell. There is a God and his justice, no matter how long it takes, is always served.

Obama admitted, "we'd brokered a deal to transition power in Ukraine".  He lied about Russia invading Ukraine and about having a US base near Kiev with more soldiers arriving. Do you think it's still self defense on America's part?  Here is a member of Ukraine's parliament, Oleg Tsarov, warning everyone about US preparations for civil war in Ukraine, November 2013 in this video. Today, even the people of Kiev, where the coup began, are protesting Americans at the US Embassy there, "Let them send their sons (Americans), let them die and rot away there. Don't take our children!"

President Putin said the US foreign policy is doomed to fail. It is America's Soviet Mistake. If Americans are unfortunately struck by tragedy in the US they may ask God why? However, before they ask God, they should look at the blood spilled in other countries where the US is involved. The swastika was once a sign of good fortune and prosperity. Now it is a symbol of pure evil. The stars and stripes used to mean freedom from tyranny but now the US legacy is tyranny for all.

Recently, for the first time I have seen an American not lie and reflect the truth in Ukraine instead of lies from the US media and Obama. Perhaps there is hope. An American, Russell Bonner Bentley, in Horlivka, Ukraine,  who saw the bombings and gives more details about our main video, appeals to America in this video. If you don't believe me let him tell you:

"This is the work of the Ukrainian Nazis that the United States and Barack Obama back, direct and pay and arm. Let's go see what they've done. Last week this was a nice home. A happy family lived here, went to work, went to school. Early in the morning 3 days ago, out of nowhere come bombs from the Nazis. Killed the people, hurt the children, destroyed the home...

THIS IS WHAT THE UNITED STATES IS DOING IN UKRAINE. All the people that have died, all the homes like this that have been destroyed are only because this war was started by the United States government. YOUR GOVERNMENT. There's no explanation, there's no justification for this kind of true terrorism. They say that the Donbass, the people who defend Donbass are terrorists. Who's the terrorists? We don't shoot women and children we don't shoot families we don't destroy homes. The Nazis do. The US backed Ukrainian Nazis. Terrorists. They're the ones who did this.... What kind of people do this? What kind of people spend billions of dollars to destroy innocent people's homes, to murder children? To murder families in the morning while they're sitting down to breakfast. What kind of people do this? What kind of person are you? You see this video. You know what's the truth. You're in America. You vote for Obama, you vote for Bush. You vote for Hillary Clinton. What kind of person are you to do that?. This is your responsibility. Americans are like the good Germans that supported Hitler and that said we don't care what the Nazis do in other countries. We just have our jobs. We just want to watch sports and drink beer.

This is a war for the future of mankind and you decide which side you're on....Now's the time to go to the street. Now's the time to stand up and to say no more. No more murder. No more terrorism that the United States backs for the Nazis here. This is what's happening everyday in Ukraine. The Nazis that the United States backs are murdering civilians here. What are you going to do about it?"