The story of Jonathan, Ode to an Immigrant

Let us call him Jonathan, a young man, twenty-seven years of age, a son, a father, a brother, a husband, a friend whose destiny was to lie under a grave somewhere in Southern Europe marked Nr. 247 May 2015 Mediterranean Sea. Let us call him a victim, not an immigrant. Let us not allow the mantle of anonymity to cloak Jonathan's story forever. 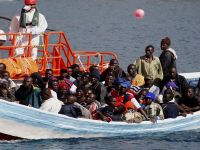 Let us call him Jonathan for we do not know his real name - he had no documents when he was forced to jump into the sea when 150 meters off the Italian coast without a life jacket and unable to swim, although he had informed those who took his entire family's one thousand dollars life savings of the fact and had been assured safe passage to the Italian coast. The result?

Jonathan was found face-down in the Mediterranean Sea, wearing beige trousers, brown slip-on shoes, dark-brown socks, khaki shirt and black belt, drowned, lying motionless among pieces of driftwood, plastic bags, a plastic bottle, the head of a plastic doll... twenty-four hours after the terrifying ordeal which was to take his life.

They say the last thing we see before we die is flashes of our own life. I wonder what Jonathan's were.

Another flash was the first day at secondary school, followed by his high school graduation but before this a long string of jobs, sometimes two or three at a time, to help his parents feed the family, to help buy school materials for his siblings. The flash of that day when he met the girl who would become his wife, the birth of their first child, a daughter, finishing his technical course as a machinist, enabling him to apply for better paid jobs.

The visit of a former neighbor who was working in Germany and who was the first to sell Jonathan the dream of emigrating to Europe to find untold riches. He didn't tell Jonathan how he had made his money but he did tell him that if he paid two hundred dollars to someone he would introduce Jonathan to another person who would set him up for a trip to Europe for a further thousand.

The flash when his grandfather handed over five hundred dollars, his entire life's savings, which Jonathan added to his own money and that he had borrowed from his mother, cousins, uncles and aunts, godfather, godmother, friends and neighbors. The last night at home with his wife, who had bought him the beige and khaki clothes he was wearing, his "clothes for Europe", which would be his shroud.

The nightmare journey across the Sahara desert, during which three of their group of twenty-one died in the sands, the trip across Libya encountering increasingly hostile and dangerous individuals who called him names in Arabic, who spat at him, who beat him with sticks before forcing him to live in a twenty-square-meter room with ten other migrants, not seeing the sunlight for two months, eating stale rice, no sanitation, no running water, each and every one of them sick with diarrhea.

The elation and relief at being called that night at eleven o'clock with the words, "OK it's time now", being herded on a creaking vessel stinking of oil, telling the pilot he could not swim and asking for a life jacket, only to be laughed at and told to sit down and shut up. The journey across the sea to Europe, the lights far off in the distance...and the instruction to jump overboard and swim for it.

The panic as he screamed yet again that he did not know how to swim. The flurry of arms and flailing legs, the gasps for air then that long, long, long, slow, steady drink of cool water slipping down, down, down, under the water, Jonathan's dreams sold down to the sea bed along with the crabs eagerly waiting to eat every slither of his flesh.

Jonathan's last flash was the face of his daughter smiling at daddy as he went away to Europe to find a new future for his family, the key to prosperity, happiness, a stable job in a stable environment in which they could live together as a family in dignity.

His wife and daughter are waiting patiently at home for his first letter which will never come. She tells the little girl that daddy will call them when he has a job and they will go to him. They probably will.

As she sings the little girl to sleep, the lullabies take the child to dreamland where she finds her father welcoming her with open arms, smiling and telling her he is all right. Jonathan is lying face-down in the Mediterranean Sea, wearing the beige trousers, brown slip-on shoes, dark-brown socks, khaki shirt and black belt his wife gave him only last month... drowned, lying motionless among pieces of driftwood, plastic bags, a plastic bottle, the head of a plastic doll...

His story is not and must not be one of failure and his life was not in vain because Jonathan's life story will remind others that the world needs to change. We are all Jonathan.